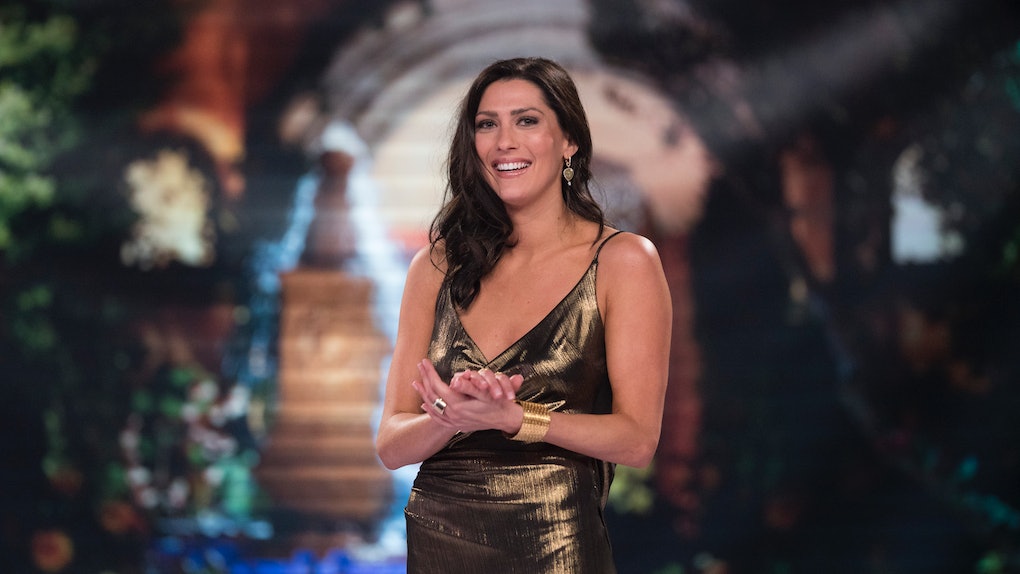 There are plenty of other fish in the sea, and new Bachelorette Becca Kufrin definitely learned that on March 15, the first night of her season's filming. She may have been forced to watch her break-up with Arie Luyendyk last week, but Becca got herself the Bachelorette gig for being a good sport during the highly public split. Now with the filming of her season in full swing, Becca has an exciting few weeks ahead of her. These behind-the-scenes pics from Becca's first Bachelorette night will make you even more pumped for Season 14's premiere in late May. Can we keep getting behind-the-scenes photos just to keep tabs on Becca's outfits throughout the season?

When the Bachelorette crew descended upon the infamous mansion for yet another round of TV matchmaking this week, franchise creator and producer Mike Fleiss made his traditional visit to set to provide fans with an exclusive look at the lead's first night. In past years, he has posted group shots of himself, host Chris Harrison, and ABC senior vice president of alternative programming Roberts Mills with the Bachelor or Bachelorette outside the mansion. Season 14 of The Bachelorette was no different, with Fleiss sharing a photo of the three men with Becca on Twitter.

While Chris has seen better days based on this photo, Becca kills it in a slinky white gown that low-key hints at her bridal aspirations. It's good to know that she learned her lesson about what wearing black on big filming days can cause.

Fleiss also posted a photo of Chris delivering his usual pep talk to Becca before the men arrived.

Fleiss's Twitter usually seems to attract more hate than positivity, but some fans did pop up in the post's replies expressing support for Becca.

Chris also shared a (more flattering) photo of himself with Becca on Instagram.

Fleiss, who seems to hang out in the producers' control room for most of Night One's filming, also posted a sneaky pic of the men congregating in the mansion's living room. Apparently, Fleiss hides in the shadows behind cameras and lights to grab these kind of photos. It's your first experience with paparazzi, boys!

His shot shows one man in a chicken suit, bringing back the token costumed contestant that Arie's Bachelor season sorely lacked. Now, the big question is whether this guy will stay in the chicken suit all night or (hopefully) has a suit to change into somewhere.

Rounding off his live tweets, Fleiss hinted at a contestant's bizarre entrance, which is to be expected on Night One, and a similarly strange exit. I'll believe it when I see it.

Although the only notable photo he shared was a grainy shot of a contestant's clasped hands, Mills also provided some insight into what Night One introduced. I had to Google both of these references, so my bet is that a good chunk of The Bachelorette's audience definitely won't pick up on them.

Apparently, the aforementioned chicken suit is related to The Baseball Bunch, which was a baseball-themed children's program that aired in the 1980s.

Appearing on The Ellen DeGeneres Show earlier this week, Becca explained that she's moved on from Arie and is ready to start this TV process anew:

I feel good. I went through the entire grieving process, I was mad, I was sad, I was confused... I watched the entire season back and saw his relationships unfolding with everyone else and seeing that kind of helped move on to realize that he just found a better fit with Lauren. So, [I'm] doing well.

Season 14 of The Bachelorette premieres on Monday, May 28, at 8 p.m. ET on ABC. Until then, I'm staying glued to Mike Fleiss and Chris Harrison's social media for any other sneak peeks at filming.