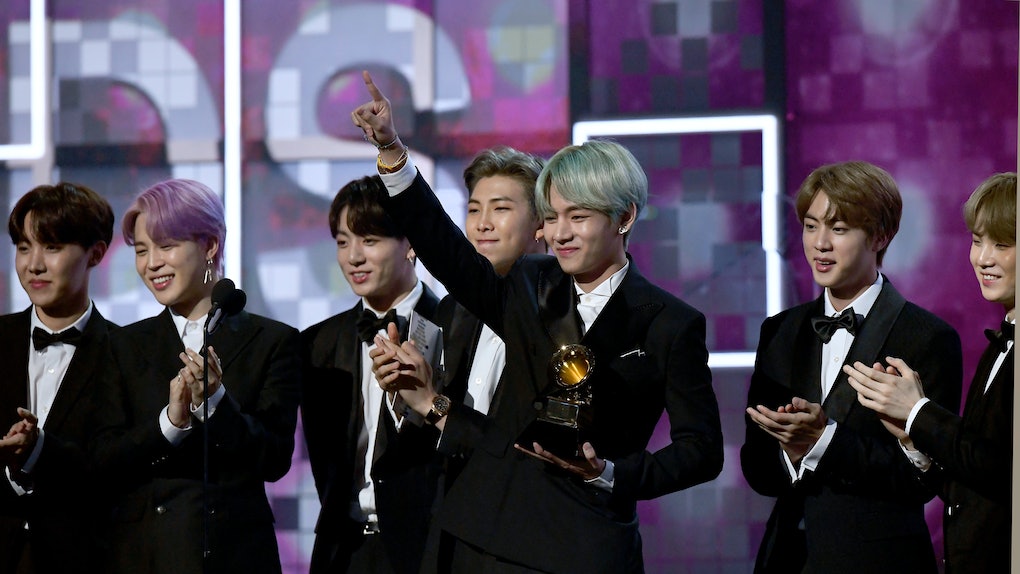 Face it: It's only a matter of time before each and every one of us falls in love with BTS, so you may as well stop fighting it and hop on the ARMY bandwagon. If I had to guess what, exactly, it is that's enthralled so many unsuspecting fans over the past few years, it has to be the band's mix of talent, charm, and authenticity — a combination truly hard to come by. While BTS makes every intricate dance move and angelic high note look like it was effortlessly achieved, these guys work countless hours perfecting each and every one of their performances and continue to push themselves to do more. It's no wonder they keep shattering expectations left and right. These 20 records BTS has broken show BTS' non-stop effort and dedication is truly paying off.

From YouTube and the Billboard charts to Spotify, SoundCloud, and the music award show circuit, BTS has essentially taken over every platform imaginable. But it takes two to break records: the artist and their fans. BTS has a lot of fans, and gain new ones every day, which means they'll likely be breaking more records with their next comeback (whenever that is *sob*). Until then, let's appreciate these 20 records BTS has broken so far.

On Aug. 27, 2018, BTS released their "IDOL" music video and it accumulated 45 million views in just 24 hours, breaking Taylor Swift's previous record for "Look What You Made Me Do," which reached 43. 2 million in the same timespan.

Then, on April 12, BTS released their "Boy With Luv" music video and broke the YouTube record again. "Boy With Luv" racked up an impressive 74.6 million views in a single day, nearly twice as much as BTS' previous YouTube record and nearly 20 million more views than the previous record-holders (BLACKPINK with "Kill This Love").

BTS' 2017 American Music Awards performance not only marked the group's U.S. television debut, but also the first time a K-Pop group ever performed on a major U.S. award show.

3. First K-Pop Group to be Nominated for a Billboard Music Award

In 2019, they became the first K-Pop group to be nominated for a main award at the show when they were nominated for Top Duo/Group, an award they ended up winning (that's another first, btw).

BTS Love Yourself: Tear, released in May 2018, immediately topped the Billboard 200 chart, becoming the first K-Pop album to do so, and only the second K-Pop album to crack the top 10 overall.

BTS' lead single from Love Yourself: Tear, "Fake Love," debuted at No. 10 on the Billboard Hot 100, making BTS the first K-Pop group ever to have a Top 10 hit on the chart. Since then, BTS topped themselves when their April 2019 single, "Boy With Luv" debuted at No. 8.

A week after BTS dropped Love Yourself: Tear on May 18, the group went from being No. 4 on the Billboard Artist 100 chart to No. 1. According to Billboard, the Artist 100 chart "measures artist activity across key metrics of music consumption, blending album and track sales, radio airplay, streaming and social media fan interaction to provide a weekly multi-dimensional ranking of artist popularity."

8. First Group Since The Beatles To Have 3 Billboard No. 1's Within A Year

Love Yourself: Tear, Love Yourself: Answer, and Map of the Soul: Persona were all released and hit No. 1 within 12 months, which is a huge achievement. The last group to do so was The Beatles, who had three No. 1 albums between November 1995 and October 2016.

9. First Album By a Korean Artist to Top the U.K. Official Albums Chart

After BTS' Love Yourself: Tear, Love Yourself: Her, and Love Yourself: Answer reached No. 8, No. 14, and No. 14 respectively on U.K.'s Official Album chart, the band finally hit No. 1 with Map of the Soul: Persona in April 2019 — the first Korean act to do so.

10. First Korean Act to Receive Gold Certification from the RIAA

BTS' Love Yourself trilogy ended with a bang, as Love Yourself: Answer recorded half a million units and helped BTS become the first Korean act to receive a gold album certification by the Recording Industry Association of America.

11. Highest Sales Ever for an Album on Gaon Music Chart

BTS is the first K-Pop group and the first Asian artist overall to surpass 5 billion streams on Spotify. The feat coincided with the release of Map of the Soul: Persona.

On Oct. 2, Forbes reported that BTS' "Boy With Luv," featuring Halsey, was played on Spotify almost 285 million times, making it the most-streamed K-Pop song ever on the platform.

14. First Korean Act to Be Nominated for An AMA

There's a reason Justin Bieber tweeted, "Now watch this tweet go crazy," after he wished BTS' Jungkook a happy birthday on Twitter. According to BBC, with each BTS tweet "having an average of 330,624 retweets, replies, likes or other interactions," BTS has the most Twitter engagements ever. Harry Styles previously held the record with 147,653 engagements per tweet.

BTS may have debuted in 2013, but it wasn't until 2017 when they really started skyrocketing to unprecedented levels of international fame. Besides appearing at the Billboard Music Awards and winning Top Social Artist that year, they became the most tweeted-about celebrity in 2017. They also took the title in 2018, while Jimin took the No. 8 spot solo.

On top of being the most-tweeted-about celebrity of 2018, BTS also hold the record for having the most-liked tweet of the year: a video of J-Hope doing Drake's "In My Feelings" challenge.

19. Fastest to Reach One Million Followers on TikTok

BTS sent their fans into a frenzy when they joined TikTok on Sept. 25, 2019. Fans quickly followed BTS on the platform, and on Oct. 23, the Guinness World Records organization announced that BTS gained one million TikTok followers in record-time: 3 hours and 31 minutes.

20. First Korean Act to Present at the Grammy Awards

BTS' appearance at the 2019 Grammy Awards was historic, as they were the first Korean act to present an award on the show. The group handed over Best R&B album to H.E.R, whom they are big fans of. If their history with award shows is anything to go by, we may see BTS become the first K-Pop artist to win a Grammy one day as well!

Those were just 20 records BTS has broken, but I know there are wayyyy more. If I were to go through all of them, it would take forever, especially because it seems these guys will keep breaking records every day.