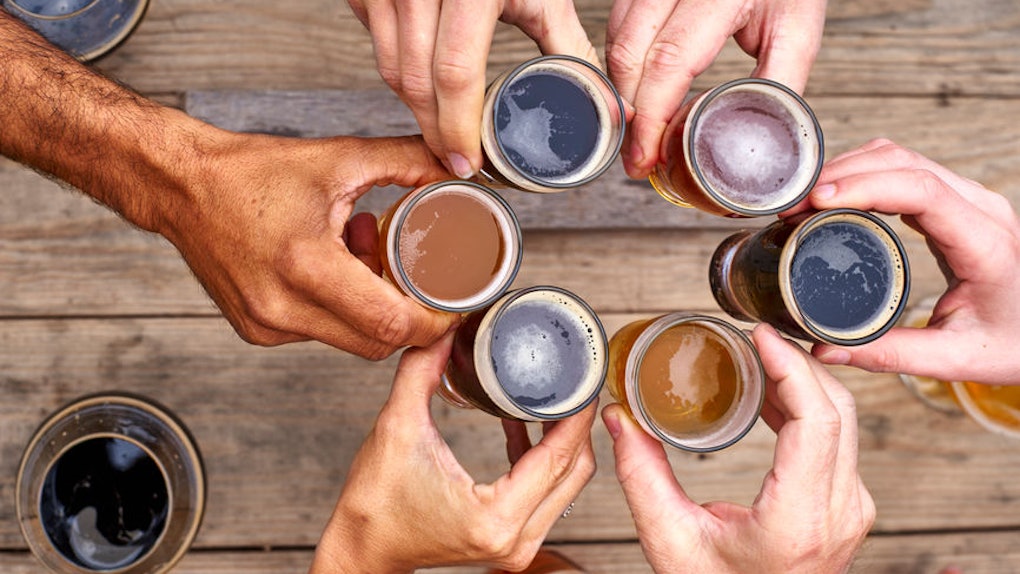 Friday, Sept. 7 is a national holiday that definitely speaks to a vast majority of the American population. Aside from the fact that it's SNL comedian Leslie Jones' birthday, as well as National Acorn Squash Day (aka also my kind of holiday!), it also happens to be National Beer Lover's Day. And even though my friends and I basically celebrate National Beer Lover's Day every Friday, there are some really sweet deals at various restaurants, stores, and bars, in honor of the holiday. So, raise your glass, and ring in the start of the weekend the right way with these 10 National Beer Lover's Day deals.

Whether you had initially planned on going out tonight, staying in to play boardgames, or hanging with your dog for as long as possible, there are a ton of ways you can celebrate National Beer Lover's Day on Friday. With deals on draft brews, dollars off buckets, and even BOGO Brewscuits for your pup, you can ball on a budget while (responsibly) drinking all types of refreshingly delicious pints (if you're 21 years or older). So, get ready to enjoy a wide variety of discounts and deals, and just remember that you and your wallet can thank me later — hopefully over a nice cold one.

All month long until Sept. 22, Applebee's is selling $2 Samuel Adams OctoberFest brews. This deal isn't entirely exclusive to National Beer Lover's Day, but if you're balling on a budget, it's a solid way to celebrate.

In honor of the highly anticipated holiday, this Upstate New York Italian restaurant is offering $15 beer buckets, according to the Pane's Restaurant Twitter account. Whether you're splitting it with friends or saving it for yourself, it's definitely a hard-to-beat deal.

The Press Box Grill in Dallas, Texas, is giving customers $1 off beers upon showing staff the restaurant's National Beer Lover's Day tweet. This deal will only be valid on Friday, Sept. 7, so get your beer-lovin' butt there before it's too late.

Darby Road Pub in Scotch Plains, New Jersey, is actually offering BOGO draft beers on Friday, Sept. 7, according to its Twitter account. Life presents very few chances to get a free beer, so make sure that you capitalize on this ASAP.

According to Soul Of Miami's Twitter account, head down to Biscayne Bay Brewing Company in Doral, Florida, on Friday, and you can buy yourself six tasters and then get six for free. Beer flights will only cost $18 and guests can choose any beer. Sounds pretty nice, if you ask me.

Regardless if you can hit a hole-in-one or if you can barely manage to keep the ball on course, Highland Park Golf is serving beer specials starting at only $2, according to its Twitter account. This is definitely a worthwhile steal for any ale-lovin' pals in Birmingham, Alabama.

According to Big City Wings' Twitter account, the Houston, Texas, sports bar is celebrating the world's greatest holiday with $2 Mexican drafts and $4 craft beers on Friday, Sept. 7. The restaurant will also be broadcasting the Astros-Red Sox game on Friday, so this deal literally knocks it out of the park.

With the purchase of any entree at Hussong's Boca Park in Las Vegas, Nevada, you can get a free draft beer, per the restaurant's Twitter account. Definitely capitalize on this deal if you happen to find yourself in or around Vegas on Friday, because there's truly no better way to start off the weekend than with burritos and beers.

Since there's a good chance you'll want to pop open a brewski alongside your beloved pet, Ark Animal Hospital in Chalfont, Pennsylvania, is offering buy one, get one half-off "Brewscuits," according to its Twitter account. The pup treats are sold in-office, and they're super dog-friendly. Most importantly, though, they allow for you to let your pet get in on the holiday fun, too.

If you're looking to celebrate at home, you can create your own six-pack of brews for 15 percent off at Wines & More, according to the store's Twitter account. Just make your way to the location up in Wareham, Massachusetts, for this glorious deal.

There's a likely chance that you love beer every day of the year, but you can get some sick deals on National Beer Lover's Day. Whether it's at a bar, for takeout, or if it's for your dog, there are so many ways to knock back a pint in honor of the holiday. Have yourself some merry sipping, and a happy brew year!

More like this
These National Cold Brew Day 2021 Deals Include Free Sips & Major Discounts
By Daffany Chan
Taco Bell Is Testing A Plant-Based Meat "Cravetarian" Taco With All Your Fave Toppings
By Cianna Garrison
What Does Twizzlers' Mystery Flavor Taste Like? It'll Keep You Guessing
By Cianna Garrison
Stay up to date