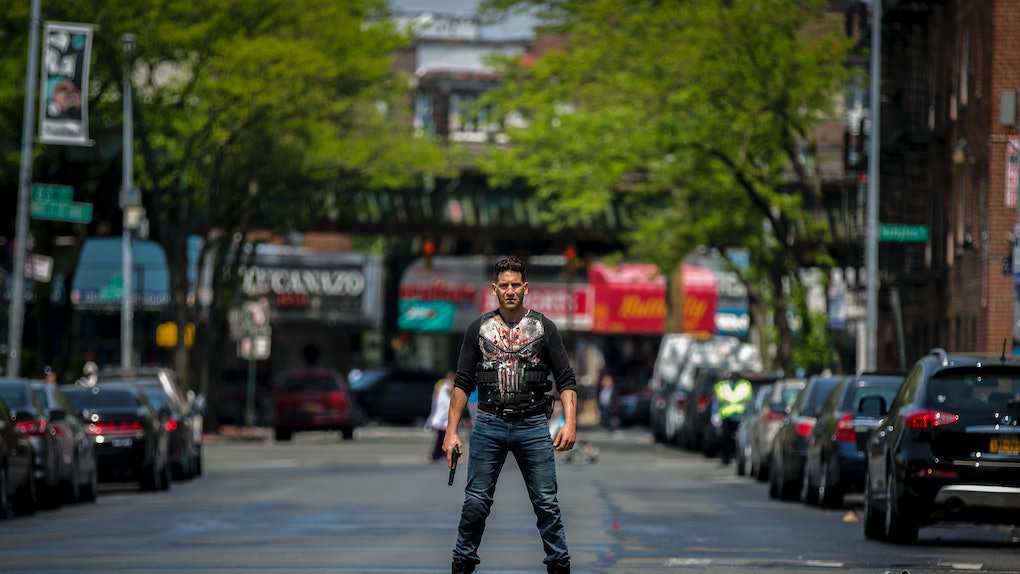 There's A Stan Lee Tribute In 'The Punisher' Season 2, So Watch Closely

Marvel's The Punisher certainly worked hard this season to try and bust out of the violent reputation it was left with after Season 1. The first episode is notable for how long it goes with barely a single violent incident, a full 35 minutes out of 53. (A guy's arm gets twisted at one point, but that's about it.) But though the show has made changes, most assume it will not be enough to avoid being part of the mass Marvel cancelation going on over at Netflix. This Stan Lee tribute in The Punisher Season 2 may be the last one The Punisher series ever does.

To be fair, Stan Lee cameos were not as de rigueur for the small screen series as they were for the box office big screen hits. Lee turned up in ABC's Marvel's Agents of S.H.I.E.L.D. in Season 1 and in a short cameo in Hulu's Runaways, but otherwise, he hasn't done them in person.

With so many Marvel TV series out there and Lee's health failing, shows like the ones on Netflix have been going the "spot the picture" route. He showed up in Daredevil, Jessica Jones, and The Defenders as a photograph. Lee turns up on posters in Iron Fist and Luke Cage. His appearance in Freeform's Cloak & Dagger was a painting. Now a tribute to him has turned up in The Punisher Season 2.

Stan Lee turned up in The Punisher Season 1 the same way he did in Iron Fist and Luke Cage, on a poster. With Season 2, there apparently was not a driving need to have Lee appear in the background this time. As far as fans have observed, there is no image of him, either as a photo or a poster.

Lee passed away in November of last year. The Punisher is the first show on Netflix from the Marvel series to premiere since then. (Marvel's Runaways Season 2 arrived on Hulu in December, so it's the second show to air since Lee's death.) With no cameo and no photo embedded in the show somewhere this time, the production decided to go with an old school tribute at the end of the show. Episode 13 closes out with a simple black card "In Loving Memory of Stan Lee."

This might seem like a bit of an anti-climax, but considering how The Punisher Season 2 ends, it probably is for the best to put the Stan Lee tribute outside the plot. Despite the show's first episode cutting way back on the violence, the back half of the show is a return to form, and the final scene of the finale is actually one of the most disturbing images of the entire series. Trying to wedge a cameo in with Lee's face on it just wouldn't have worked. As a tribute to the man passing away, it might even have caused controversy.

By putting the tribute card to Lee at the end of The Punisher Season 2, the Netflix Marvelverse has managed to honor their creator's death, even as the majority of them have been canceled. Now it just remains to be seen if there will be a The Punisher Season 3.