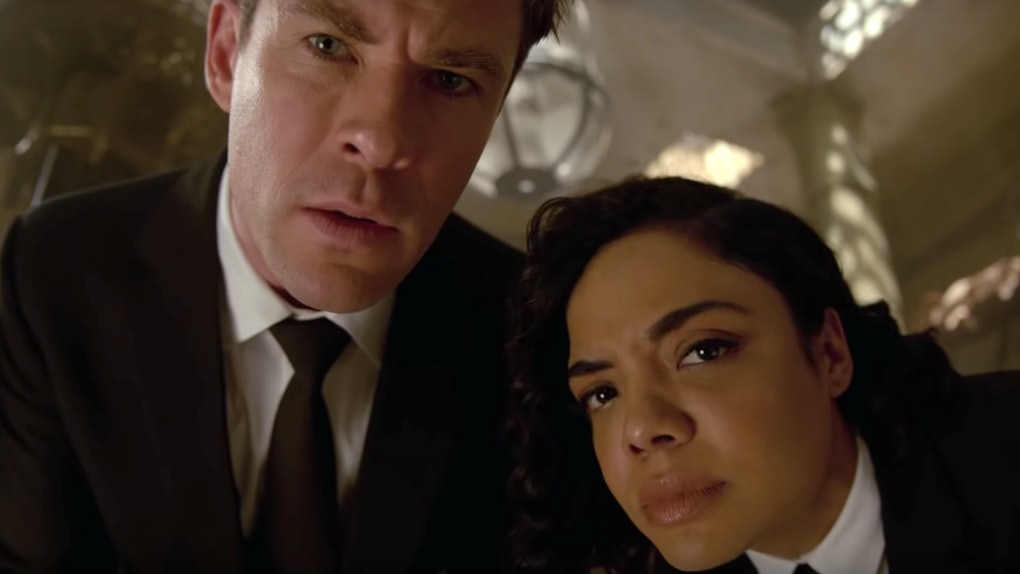 There's A Marvel Easter Egg In The 'Men In Black: International' Trailer You May Have Missed

The Men in Black are back with a whole new look. The official trailer for Chris Hemsworth and Tessa Thompson's upcoming Men in Black: International just dropped, taking the other-worldly franchise to London with even more awesome gadgets and peculiar aliens than before. This also marks the second time that Hemsworth and Thompson have worked together in a franchise film about aliens, so it makes sense that the new trailer had to show some love to Thor: Ragnarok. Yes, there is a Marvel easter egg in the Men in Black: International trailer, although some fans might have missed it.

It is actually pretty wild how similar the Men in Black: International trailer is to Thor: Ragnarok when watch it with the intergalactic Marvel movie in mind. The new trailer shows Tessa Thompson's Agent M discovering the Men in Black's secret headquarters in London and demands to join the team, so she is paired with the charismatic but not exactly principled Agent H (Chris Hemsworth). The two new partners then head out to battle aliens and save the planet. Sound familiar? Thor: Ragnarok also saw Thompson as a badass expert warrior and Hemsworth as a more happy-go-lucky version of the thunder god Thor, as the two teamed up to battle aliens to try to save Thor's home planet of Asgard.

The new trailer has some familiar moments for Thor: Ragnarok fans, such as Chris Hemsworth's character struggling to control a flying vehicle. But the real Marvel joke comes at the end. Check out the new Men in Black: International trailer for yourself:

At the very end of the trailer, Agent H finds himself up against a particularly formidable looking alien. As he is losing the fight, Agent H happens upon a small hammer and declares, "Looks like the tables have turned." Of course, this would be a lot scarier for that alien foe if Chris Hemsworth was playing Thor and that tiny hammer was actually Mjolnir. Hemsworth even does a similar pose with the tiny hammer as he often does as Thor in the Marvel Cinematic Universe.

But the clever references to Thor: Ragnarok do not stop there. Agent H then hurls his hammer at the alien, who has no problem snatching it out of the air, leaving Agent H to remark in bewilderment, "That was an incredible catch."

This is a tongue-in-cheek reference to one of Thor: Ragnarok's most shocking scenes. When Thor first fights his evil half-sister Hela at the beginning of the movie, he hurls his hammer at her, but surprisingly, she catches it in midair and causes it to explode.

Hopefully, this silly little reference to the Marvel Cinematic Universe means that Men in Black: International may include some more easter eggs and nods to Thor: Ragnarok that Marvel fans can pick up on. If Jeff Goldblum shows up for a surprise cameo then I am fully going to lose my mind.

Men in Black: International will blast off into theaters on June 14, 2019.