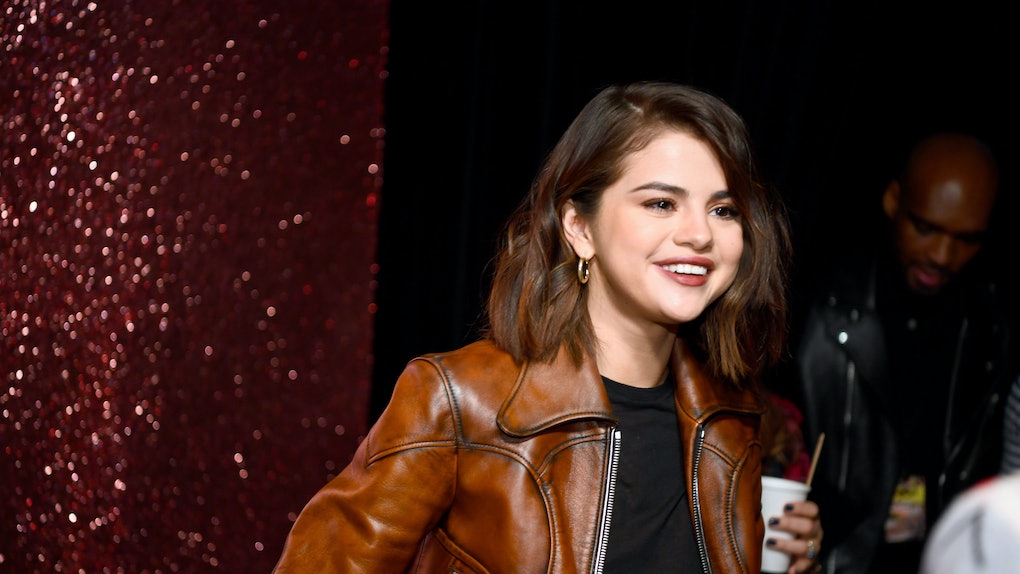 The question is, did you spot this already or, like me, did this tiny detail pass you by? It’s OK if you didn’t see it because internet detectives have done the work for us, pointing out the connection and providing all the proof. Man, I love you all.

First up, some of the "Wolves" lyrics we’re all obsessed with:

Fans were already feeling the song before it even dropped, but now that it’s here, holy hell, these lyrics are everything. So primal, y’all.

So, let’s take a look at Gomez’s “Bad Liar” video and talk about the connection. Yep... there it is. Gomez is wearing a basketball jersey with the word “Wolves” on it.

Another fan pointed out: "HER F*CKING SHIRT IN BAD LIAR SAID WOLVES WE SHOULD HAVE CAUGHT THIS SOONER! QUEEN OF DROPPING HINTS. SHE HINTED FETISH AND WOLVES IN IT."

If you need a refresher, here's the “Bad Liar” music video:

Could “Wolves” continue with more of the story Gomez was telling in “Bad Liar”? There are theories... oh so many theories, including one fan who tweeted: “Omg wolves.. the new song is called wolves.. is this gonna be a continuation in the story line of Bad Liar??”

Another fan tried to predict more precisely how the videos could be connected, tweeting: “GUYS WHAT IF ITS THE SCHOOL POOL AND ITS A CONTINUATION OF BAD LIAR OMG A CONCEPT. ‪#WOLVES.”

Others made the deep dive that maybe Gomez is dropping hints all over the place, with one fan tweeting: “So she was teasing Fetish and Wolves both in the Bad Liar music video. Maybe there's even more hints in the video about the album/other songs.”

This was a song that I heard in Japan for the first time and I was talking to Andrew Watt who is one of the writers who I’ve worked with for years and he actually just played a rough version and I thought it was really beautiful. He sent it to Marshmello and we ended up talking and created a really cool tone and a story with it. The song is very beautiful and personal and the lyrics just have, you know, a whole story of its own... weirdly at the same time I was working on it in Japan I was going through stuff too, so it’s mirrored everything.

What do you think of this "Wolves" and "Bad Liar" fan theory?

More like this
These Songs About Loving Yourself Need To Be On Your Playlist
By Michele Mendez
Selena Gomez's New Collarbone Cross Tattoo Has A Spiritual Meaning
By Sydney N. Sweeney
These Tweets About BTS' 'Bang Bang Con 2021' Sum Up The Epic Performance
By Cianna Garrison
Stay up to date