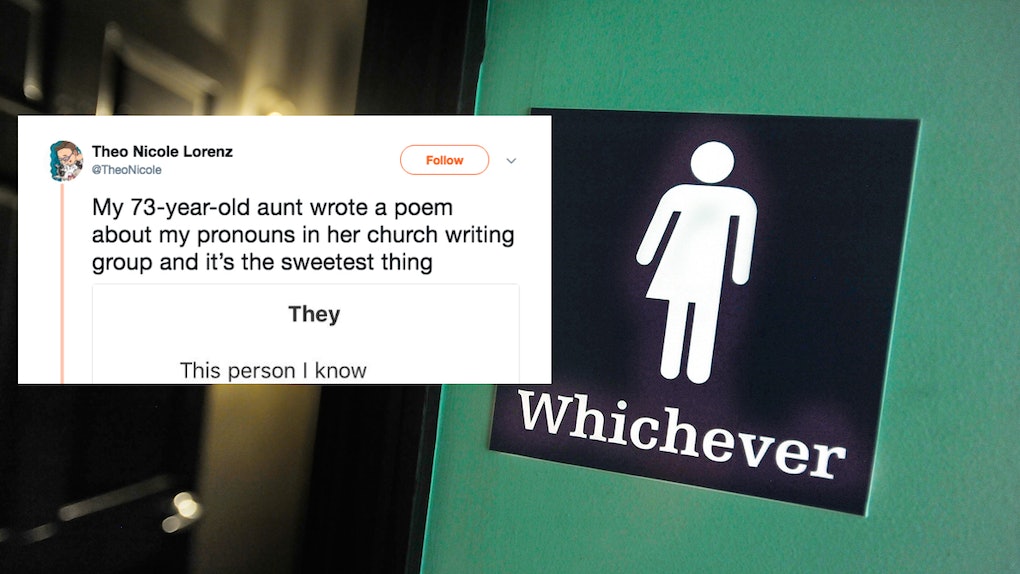 For some reason that is truly beyond me, people seem to have a profoundly difficult time just referring to people the way they'd like to be referred to. The fact of the matter is that some people just don't identify as "he" or "she." Often times, these people preferred to be referred to as "they." Unfortunately, there are others out there who refuse to honor their pronouns. Theo Nicole Lorenz's aunt's poem about they/them pronouns goes to show there's truly no reason not to just be respectful and use the term.

Along with an image of the beautiful poem, Theo Nicole Lorenz posted a tweet with the comment: "My 73-year-old aunt wrote a poem about my pronouns in her church writing group and it’s the sweetest thing." And let me tell you, the poem really is just as sweet as Lorenz described. It's entitled, "They," and brace yourselves, people, it's going to make your heart melt:

This person I know

Wants to be called a they.

It [could] bring us much closer

To see them that way.

It's a strange thing to think

And harder to say,

But they is so happy

When the effort is made.

For all the many theys and thems

It is this that I pray,

We be kind and accepting

And just let them be they.

As you can see by the almost 11,000 retweets and nearly 50,000 likes, the people of Twitter responded very well to the beautiful tweet.

It made some people burst into tears.

Even Chelsea Clinton chimed in to call the poem "beautiful and wise."

The poem even inspired some people write their own poems. The account @ZiddersRoofurry posted a poem by Zed along with the caption, "Your aunt is wonderful. She inspired me to write a poem, too."

It's important to honor what people prefer to be called. The effort's no trouble. Not much trouble at all. Whatever the pronoun or particular term all it takes is a kind heart and willingness to learn.

So many still suffer and are hurt deep within due to the unkindness of others and their hateful whims. They make honest, pained efforts to just be respected. To be seen as human. To kind hearts be connected.

If we put forth best efforts to keep our hearts open and listen and love less lives will be broken. The dignity and compassion you show oppressed people will hopefully help the world become far more equal.

Want to know more about Lorenz's amazing aunt? Don't worry, she took to Twitter to share some more details:

Also, more about my aunt because she's great:

* She does woodburning and carving and taught me the first one

A belly dancer who also carves wood in her spare time!?!? What a lady! And there's more:

* She's always loved the water (longtime scuba diver), to the point where she'll watch any movie that takes place on the water. Like Ghost Ship.

What a freaking awesome human being. Here's to hoping everyone has someone like Lorenz's aunt in their lives to love them wholly.