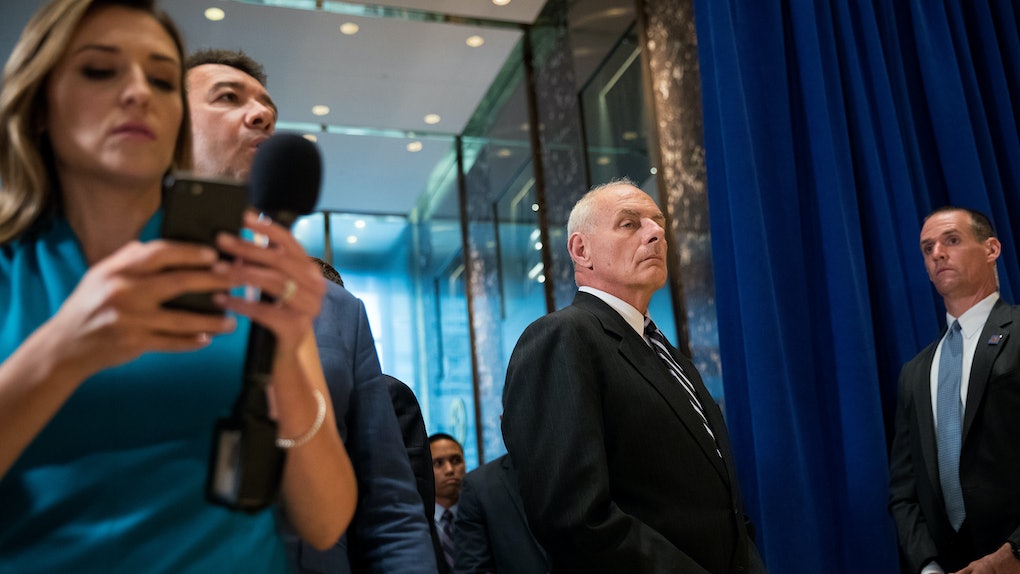 Starting Friday, Dec. 5, employees at the White House will only be allowed to use their work phones while on the job. That bit of news was reported by Bloomberg on Wednesday, Dec. 3, the same day excerpts from a forthcoming book about life inside the White House made headlines and dished dirt about President Donald Trump's inner circle. Bloomberg reports that its sources say the two events are unrelated, however, and that the White House's personal cell phone ban is being issued by Trump chief of staff John Kelly because of "security concerns."

Back in October, multiple reports stated that Kelly's own personal cell phone had been "compromised" during the presidential transition period in late 2016, when Kelly was gearing up to become Trump's secretary at the Department of Homeland Security (Kelly was promoted after Trump's initial chief of staff, Reince Preibus, was fired in July).

When news of Kelly's phone being compromised broke, Politico reported that the White House had been weighing whether to impose new rules on personal cell phone use, either in the White House residence or the West Wing. A month later, in November, Bloomberg reported that Kelly had been advocating for a ban. Now, two months later, Kelly's ban appears to be a reality.

The news was also reported on Twitter by The New York Times' Maggie Haberman, one of the more plugged-in journalists at the White House. Haberman said that White House staffers had already been given a heads up about the ban, but that many had concerns about not being able to contact their families during their long work days (according to Bloomberg, work phones at the White House don't have texting capabilities and also don't allow access to personal email).

Despite the fact that multiple reports say Kelly's ban is not related to concerns about people who work in White House talking to journalists on the side (which is how many major news stories get scooped by reporters) the news of the ban did come on a day that leaking was a big talking point in Washington D.C.

On Wednesday, President Trump released a statement that he personally dictated, according to The Daily Beast, blasting his former chief strategist, Steve Bannon. Within the statement, Trump accused Bannon of being a serial leaker.

Here's one notable part of the president's statement read:

Steve pretends to be at war with the media, which he calls the opposition party, yet he spent his time at the White House leaking false information to the media to make himself seem far more important than he was. It is the only thing he does well. Steve was rarely in a one-on-one meeting with me and only pretends to have had influence to fool a few people with no access and no clue, whom he helped write phony books.

Trump's statement was prompted by news that Bannon had spoken about the president's inner circle to columnist Michael Wolff, who has a new book coming out — titled Fire and Fury: Inside the Trump White House. One excerpt from the book, first reported by The Guardian, featured Bannon labeling the actions of Donald Trump Jr. and his brother-in-law Jared Kushner as "treasonous" and "unpatriotic."

"The three senior guys in the campaign thought it was a good idea to meet with a foreign government inside Trump Tower in the conference room on the 25th floor — with no lawyers," Bannon reportedly said in the book. "They didn’t have any lawyers."

Bannon then added. "Even if you thought that this was not treasonous, or unpatriotic, or bad sh*t, and I happen to think it’s all of that, you should have called the FBI immediately" Bannon reportedly said.

Wolff's book is reportedly based on more than 200 interviews with sources close to the president and the White House. Whether or not the White House's new cell phone ban will slow the flow of similar communication between staffers and journalists — in addition to address "security concerns" — will be something to watch.