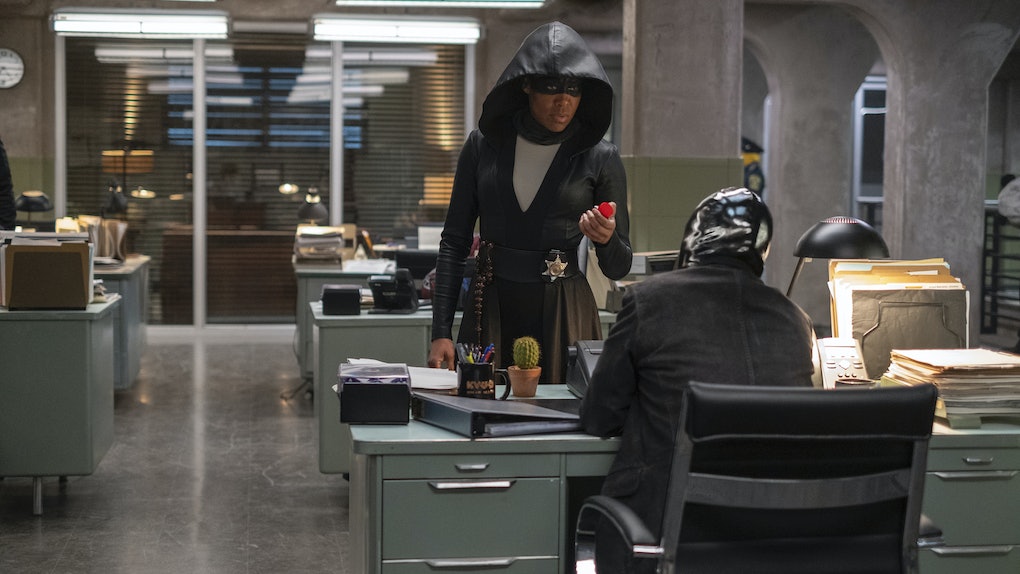 The 'Watchmen' Season 1, Episode 6 Promo Goes Way Back Into Time

Watchmen is getting more audacious by the episode. The series started with Robert Redford as president, it rained squids, and reparations had been passed. It then showed a world where cops went to white supremacist shanty towns and beat residents on the slightest pretense, trillionaires create babies from scratch, and cloning is the best way to to find hired help. But with the restaging of the events of 11/2 in Episode 5, the show took things up a level. Now, the Watchmen Season 1, Episode 6 promo promises the show is about to go even further, by retreating into the past. Warning: Spoilers for Watchmen follow.

Most of Episode 5, "Little Fear of Lightning," was focused on Wade Tillman, aka Detective Looking Glass. But bubbling in the subplot was Angela's continuing quest to investigate her grandfather, Will Reeves.

When Lady Trieu returned Angela's SUV, her grandfather's mysterious pills were still in the glove box. When Angela, as Det. Sister Night, and Agent Blake stopped by to investigate Trieu's involvement, she made sure to ask Angela if she had gotten the pills, confirming their importance. Tillman made inquiries and confirmed they were "Nostalgia," memories in pill form, created for those with dementia and Alzheimer's.

When Blake arrested Angela for covering up her grandfather's involvement, the detective swallowed the entire bottle, lest they fall into Blake's hands. It's a choice that's going to have significant consequences.

Episode 6 is entitled "This Extraordinary Being," and the synopsis reads as follows:

Deep under the influence of Nostalgia, Angela (Regina King) gets a firsthand account of her grandfather’s journey.

The black and white footage shows Angela suddenly thrown back in time, with sudden color images of memories viewers have already seen. There's Will's mother, playing the piano as Tulsa burns, there he is running from certain death as a child. But that's only the beginning of a long journey involving Will Reeves' time as a cop, the woman he marries, and the life he lived. All this mixed in with Angela's own memories, while those around her try to bring her back to herself.

What the trailer does not disclose is why. Will Reeves has a reason for giving Angela those pills. He doesn't want to tell her his life story. Reeves wants her to live his life, experience his choices. Whatever he's done, whatever Angela will learn, he believes the only way to make her understand is to walk a mile in his shoes, and then decide on how to judge his actions.

As long as the drug doesn't kill her, it might even work.