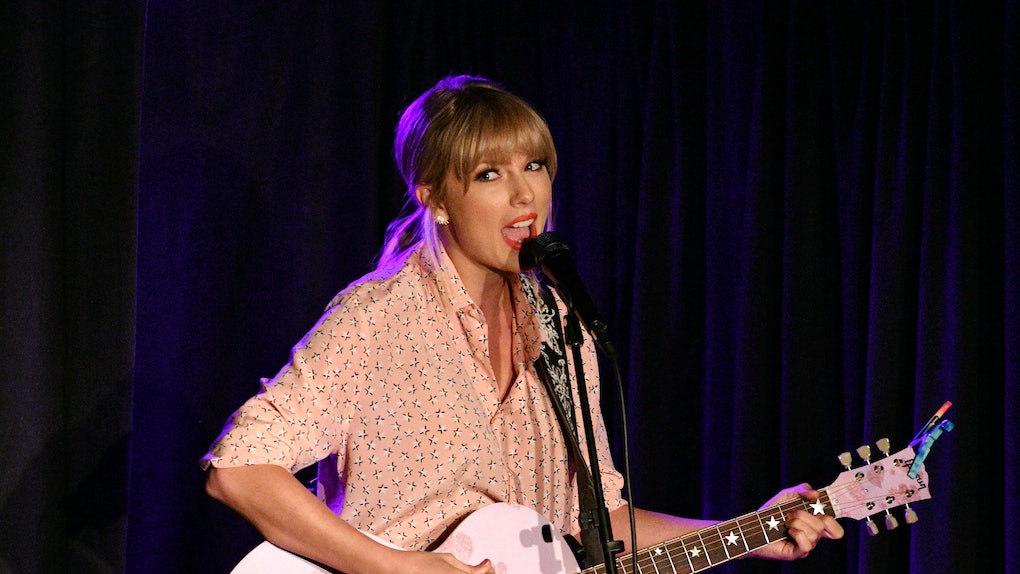 The Videos Of Taylor Swift's 2019 'GMA' Performance Are Everything & More

Taylor Swift is in album release mode. The "ME!" singer is just one day away from dropping her seventh studio album, Lover, and the Swifty fandom is as pumped as ever. Taylor Swift's GMA performance in Central Park leading up to the album's release is no doubt getting the fandom excited, as well.

Swift took to the stage in Central Park on Thursday, Aug. 22, to perform some of the songs off of Lover for the eager crowd. She performed the songs "ME!" and "You Need To Calm Down," the first two lead singles from the album, before throwing in a big ol' dose of nostalgia with "Shake It Off" from her iconic album 1989. Considering all of the drama surrounding the acquisition of her former music catalogue and label Big Machine Records by Scooter Braun (whom Swift claims has bullied her throughout her career) this performance was nostalgic AF.

Her attire? Pink sequin shorts, of course, and a bold red lip. It was Taylor Swift the way you know and love her: shiny, happy, and oh-so-sassy.

It's just a short supply of hours before Swift's next album is out in the world. Until then, you can enjoy her Central Park performance on Good Morning America all over their twitter feed:

Fans camped out all night in some pretty intense New York City humidity in anticipation for the morning show. Fortunately, Swift's own father was ready and waiting to treat her die-hards to some delicious late-night pizza. According to People, Scott Swift helped pass out 30 pizzas to the folks lining the street and sidewalk, personally. He also reportedly gave away a few promotional guitar picks, too. Swift explained to GMA,

My dad was handing out pizza! As a family, it blows our mind that people would want to do that. For our parents they’re like, ‘That’s my kid! People are waiting on the sidewalk to hear her sing!’ It’s really astonishing to us.

"Astonishing" sounds a little bit like overkill (I mean, you know who you are, Taylor) but it's still really awesome to hear that her family is so excited and invested in her career and new beginnings, even after all of these years of success. Surely, they are just as excited about the new evolution of Taylor Swift as her fans.

Lover marks her complete transformation from the dark slithering snake of the Reputation era into the rainbow-hued butterfly she's promoting today. The four tracks released prior to the album's debut are dripping with optimism, love, joy, and a boatload of other positive words. Where songs like "Reputation" and "Bad Blood" acted more as rallying cries, "ME!" and "You Need To Calm Down" are uniting bops, the kind of songs a packed bar would link arms over and sing along together.

One thing is clear, Swift is perfect at PR. The hype surrounding this new launch is at an all-time fever pitch, and I don't think it's too much to say the pizzas really brought the whole thing home.

Hang on to your sequins, Swifties. Lover is coming!