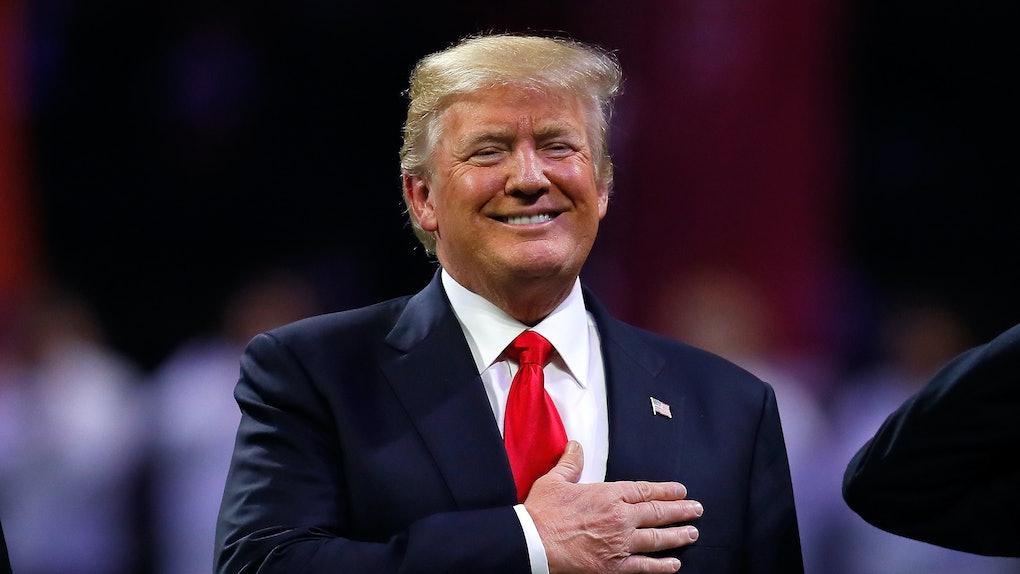 On Monday night, Jan. 8, President Donald Trump attended the college football national championship game between the Alabama Crimson Tide and the Georgia Bulldogs. But, as per usual, he made headlines (and Twitter trends) for something totally unrelated to the news at hand. This time around, a video of Trump singing the national anthem at the game had people taking notice. The video is making the rounds in the hours after the dramatic game because, well, it kind of looks as if the president does not know the words to the country's national anthem.

I'll level with y'all here. When I first saw people tweeting about Trump wordlessly mumbling along to the American national anthem, I thought it was just the typical liberal bubble acting up again and picking apart public appearances that otherwise would've gone unnoticed. But then I watched the video. Now, if you didn't notice by my last name, I'm Greek-American. And watching Trump open and close his mouth while the national anthem played reminded me just way too much of myself mumbling along to the words of the Greek national anthem, which I kind of but don't totally know. (All of which is to say if the president did, in fact, forget the words, I'm sympathetic? I guess?)

Alright, you know what? Just watch the video for yourself here:

OK, I know, I know, there are more important things to talk about, right?

Like I guess we should mention that Alabama won the game? Coach Nick Saban is now some people's hero, as is Alabama rookie Tua Tagovailoa. A lot of people still care about the sports exploits of kids who aren't legally allowed to drink alcohol yet (but are somehow allowed to participate in another activity known to cause quite a bit of brain damage)!

But here's the thing: Trump's performance at the national anthem on Monday night is a big deal because Trump made it a big deal.

Trump made performative patriotism a big deal by spending months yammering on about NFL players' anthem protests throughout this fall. For months (months!), Trump made a huge deal about how you gotta stand and respect the national anthem or else you're a "son of a b*tch." Never mind that it was peaceful. Never mind the very real reasons behind Colin Kaepernick's initial protest. Never mind that protest is the core of American democracy and this country's founding.

And so, many people on social media and beyond were quick to point out the apparent hypocrisy between Trump's tweets about the national anthem and his seeming inability to actually sing all the words to it.

Just for the record, Kaepernick's original protest, which he began in the 2016 NFL preseason, was about violence against black Americans. He explained,

Also, just for the record, protest and politics have been a part of sports since the dawn of the Olympics (again, I'm Greek, I know this stuff). So one could make the logical conclusion that by hammering the protests — which, again, are historically part of both American democracy and sports — a person like Trump is angrier about having to confront some things he doesn't like to hear about (i.e. racism and how it needs to be combatted) than about the fact of the protest in and of itself. Just spit-balling here!

At the end of the day, at least we'll always have that video of Trump "singing" along to demonstrate ideal patriotism. God bless.