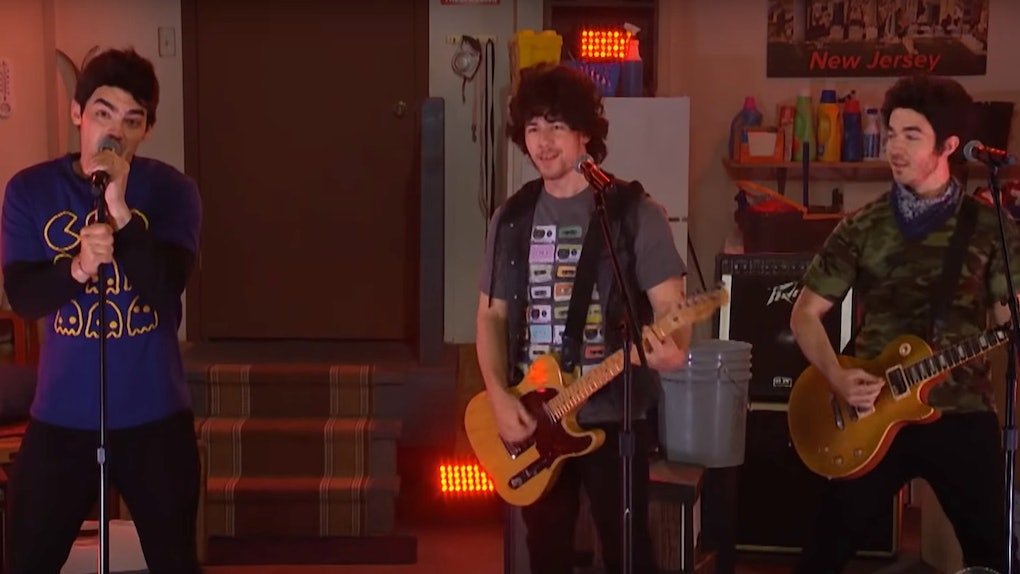 It's been almost a week now since the Jonas Brothers officially got the band back together, and I'm still not over it. I actually may never be. On Thursday, Feb. 28, the boys reactivated their Twitter to announce they were dropping a new song called "Sucker" at midnight, and nothing in my world has been the same since. I mean, the three bros — that's Nick, Joe, and Kevin — have been doing a week-long stint at The Late Late Show to promote their new music and upcoming tour, and the video of the Jonas Brothers' 2019 remix of "Year 3000" — which they performed on the show with host James Cordon — is legit the parody none of us ever knew we needed, but now can't live without.

In case you forgot, "Year 3000" was one of the JoBros first big hits. The tune (which was actually first released by the English pop-rock band Busted before it was a JoBro smash) was about a dude who had invented a time machine and just returned from the future to the year 2006, which is the year the Late Late Show parody begins.

The bit opens with all three boys decked out as their '06 selves. Kevin's got some major sideburn action and a bandana around his neck, Joe is rocking his old Noah Centineo-style hair and a Pac-Man tee over long sleeves, and Nick's got on his full head of curls and the signature vest he never seemed to walk outside without.

Anyway, the three of them are working on their new song — which is now called "Year 2019" — when they meet the time machine dude who's now British (yes, it's Cordon) and who has traveled back from 2019 to school the trio in all the weird stuff that will go down over the next 13 years.

You know, like the fact that Donald Trump (aka, that dude from The Apprentice) is now president, The Rock is a famous actor, the Kardashians have built an empire, Apple makes watches, Fyre Fest was a disaster, Instagram is thriving, vegan milk is a thing, and there's a viral new dance craze called "flossing."

Check out some of the other spot-on lyrics:

I've been to the year 2019 / You won't believe who the new president is / It's the guy who hosts The Apprentice / It's pretty weird, super weird

I’ve been to the year 2019 / There’s dogs on planes, for emotional reasons / The Kardashians have had 15 seasons / They’re everywhere / We’re keeping up.

We clearly live in some pretty crazy times, fam! But just like the Jonas Brothers sing at the end of their song, things can only get better.

"The band is back together, and we're doing fine," they promise us.

I'm not crying, you are.

More like this
Is Taylor Swift's "Mr. Perfectly Fine" About Joe Jonas? Sophie Turner's Instagram Has Fans Curious
By Brandy Robidoux
Olivia Rodrigo's Reaction To Getting Her First Parking Ticket Was Priceless
By Brandy Robidoux
Rosé From BLACKPINK's "Gone" Music Video Is The Ultimate Sad-Girl Aesthetic
By Abby Monteil
Stay up to date