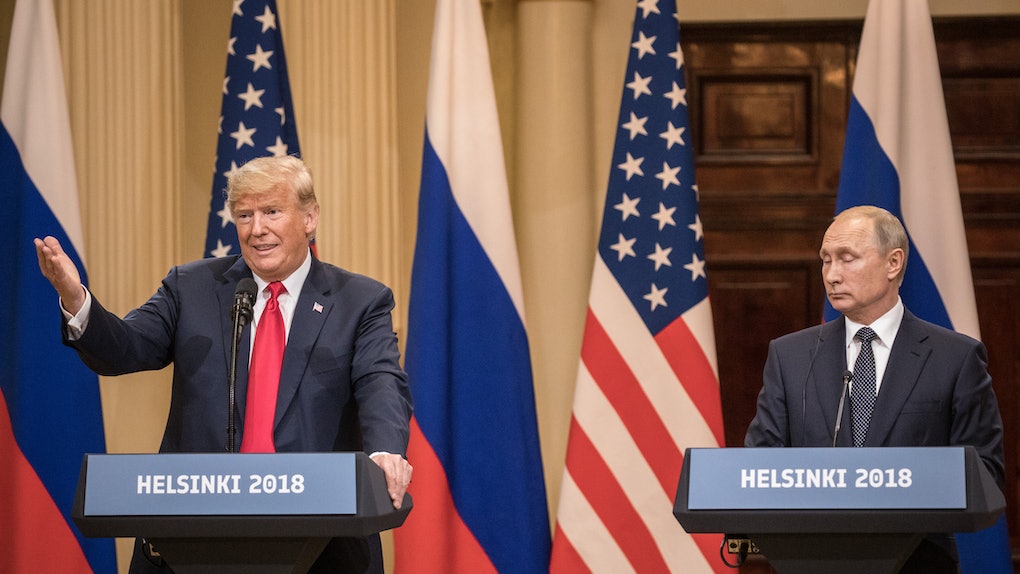 President Donald Trump and President Vladimir Putin spoke during a press conference following their Helsinki summit on Monday, July 16. Due to the strained relationship between the United States and Russia, the questions focused on many hot-button issues. One of the reporters asked if Russia had dirt on Trump, and the video of Putin's response about "compromising materials" on Trump is unsettling.

The question about Russia or Putin having compromising material on President Trump came toward the end of the press conference on Monday, and Putin's answer did not totally clear up the inquiry. According to a video posted on the CBS Evening News Twitter account on Monday, a reporter asked, "Does the Russian government have any compromising material on President Trump or his family?"

After the question was translated from English to Russian for Putin, the Russian leader initially responded with a chuckle.

Putin then alluded to his knowledge of the infamous Steele dossier when he said, "I heard these rumors that we allegedly collected compromising material on President Trump when he was visiting Moscow."

Without outright denying collection of material, Putin continued, "Back then, when he was a private individual, a businessman, nobody told me he was in Moscow."

Putin then attempted to dismiss the claim by using an example of the recent St. Petersburg Economic Forum that was held in Russia in early June 2018. According to video of the press conference from CNBC on YouTube, he talked about the "over 500 American businessmen" in attendance, and then Putin framed the idea of collecting information on individuals as ridiculous when he said,

Do you think that we tried to collect compromising material on each and every single one of them? Well it’s difficult to imagine another nonsense of a bigger scale than this. Well, please just disregard these issues, and don’t think about this anymore again.

Um, OK? While Putin refers to the idea that he has damaging information on Trump as "nonsense," he doesn't appear to outright deny the allegation.

Trump chimed in following Putin's answer, and he exclaimed, "If they had it, it would have been out long ago," per CBS News. You can hear the full question and answer at the 43:30 mark of the video.

Of course, what the reporter was referring to when he asked about compromising material was information from the unverified Steele dossier that made claims of the infamous "pee tape" that could have been used as blackmail against Trump by the Russians. This portion of the dossier that claims "Russian authorities had evidence of Trump watching prostitutes urinate in a hotel suite" remains unverified, and Trump has denied the claims, per CNN.

James Clapper, the former U.S. Director of National Intelligence, recently discussed the dossier in an interview with Salon in May 2018. While Clapper made it a point to state that the Steele dossier is "not classified or an intelligence document," he went on to say that some information from the dossier was reportedly separately "corroborated" in the intelligence community with the use of trusted sources. Again, he reiterated that the "salacious parts" of the dossier have "never been corroborated."

While it's important to keep that bit of information regarding the "salacious" aspects of the dossier in mind when asking questions about it, it's still a bit troubling that Putin couldn't deliver a straightforward "no" as an answer to the question about having compromising materials on Trump.