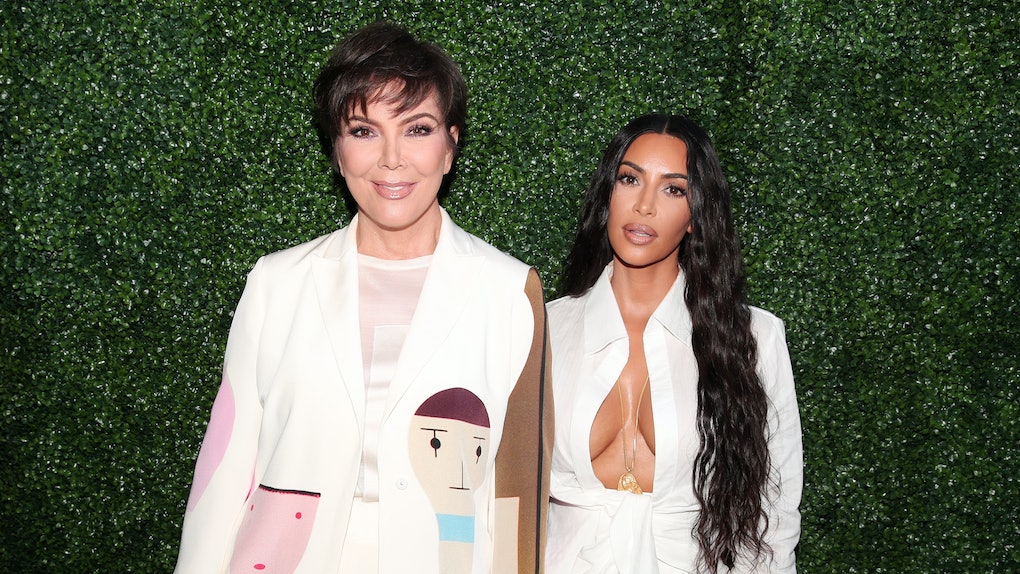 Things are going to get serious on the next episode of Keeping Up With The Kardashians. In a new clip teasing what's to come in the Sunday, Sept. 22, episode, Khloé Kardashian frantically calls Kim to reveal that mama Kris Jenner is about to be picked up by an ambulance following a scuffle with Kim's security. And the video of Kim Kardashian finding out her security tackled Kris Jenner is tense, to say the least.

Kim was in a car with Jonathan Cheban when she got the call from her younger sister. You can hear how concerned and freaked out Khloé was over the phone, but the most unsettling part of the call is hearing Kris Jenner crying in pain in the background as she said things like, "My neck!"

"Oh my god, Kim. You've got to come. Your whole security just f*cking tackled Mom," Khloé said when Kim answered the phone. "We just called 911. This is so crazy."

"Come over here!" Khloé responded. "An ambulance is on the way here now."

"I'm rushing home right now, but what happened?!" Kim asked. Then Khloé finally dished on how Jenner ended up being tackled to the ground.

"We were in the backyard, and Mom came down when she shouldn't have. I told her to go around [to the front of the house]. And they just tackled her," she said, then hangs up quickly.

This appears to be the moment teased in the trailer for Season 17, where Jenner was seen on a stretcher with a brace around her neck.

The teaser clips haven't shown if the tackle happened on camera, nor do they show any of the aftermath, but considering Jenner appears to be in good health now, it looks like the tackle didn't cause too much damage when it happened. But it's definitely a scary moment! I mean, I don't know how the f*ck I would react if Kim Kardashian's security tackled me.

On the other hand, though, why the f*cking f*ck did her security think it was a good idea to tackle Kris Jenner?! It's not like they don't know who she is and mistook her for a burglar! Under what circumstances would it be necessary to tackle the Kardashian family matriarch to the ground, sending her to a hospital in an ambulance?! Riddle me that, Kim K's security team!

It appears as if this moment will be the big drama for the Sept. 22 episode. In the previous episode, Kim and Kourtney got in one of their staple blowout fights. After tension arose between the two sisters over what Kourtney should wear to her 40th birthday party, Kim ended up accusing Kourtney of copying her style. It resulted in them exchanging nasty words over text, and I've got to say, these fights Kim and Kourtney get into really seem unhealthy. It's not clear what this upcoming episode has in store for Kourtney, but I think the entire family will agree that Kim's security tackling Kris Jenner is not great.

More like this
Here's The Kardashian-Jenner You're Most Like, Based On Your Love Life
By Candice Jalili
Kim Kardashian Asked Addison Rae If She's Hooking Up With Kourtney Kardashian
By Joyann Jeffrey
A Kim Kardashian Skin Care Line May Be Coming Soon
By Margaret Blatz
Stay up to date