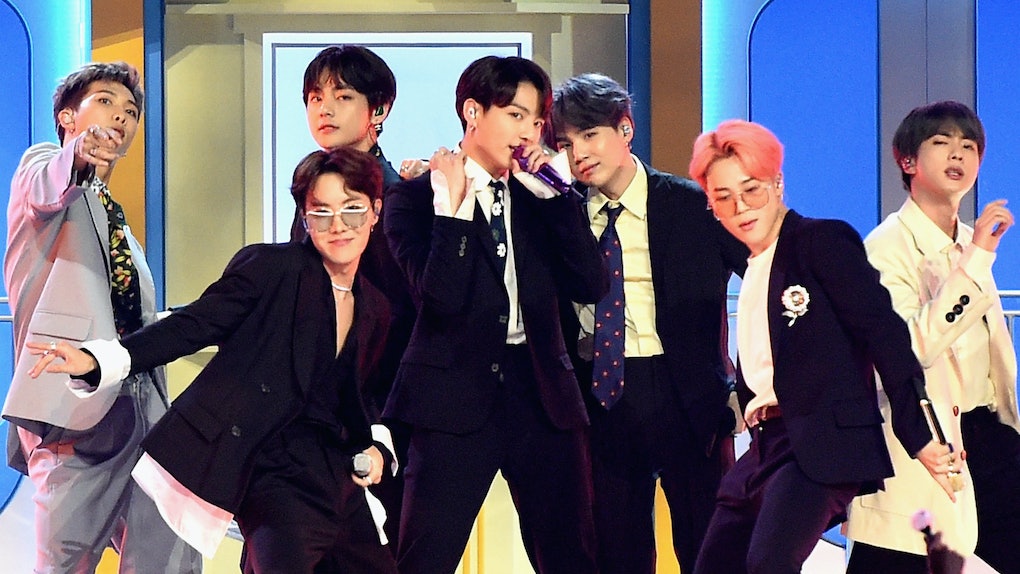 When The Voice released a promo video teasing that a "special announcement" from BTS and The Jonas Brothers would air during the May 14 episode of the show, ARMYs were thrilled because they had been speculating for some time that BTS had pre-recorded a performance for the show (because you can't get anything past the BTS ARMY). But fans were in for a major disappointment, because when they tuned in for the big announcement, it just... never came. Literally, BTS was never mentioned and any mention of their announcement was seemingly deleted from The Voice's Twitter. But the video of BTS' The Voice performance announcement is finally here, confirming that the boys will perform on the May 21 finale of the competition show.

The confirmation comes two-and-a-half days after BTS fans tuned into the hour-long May 14 episode for the big announcement, only to see The Voice follow through on half of its promised announcements. The Jonas Brothers appeared to announce they were performing on the finale, but instead of BTS, Taylor Swift and Brandon Urie were announced as performers. The ARMY was left high and dry at the end of the episode with not even an explanation as to why BTS' announcement wasn't aired. Let's just say fans were less than pleased (and said as much on Twitter).

Well, the announcement is finally here. In a video posted on the afternoon of May 17, Suga, Jin, V, RM, Jungkook, Jimin, and J-Hope stand in front of a massive The Voice logo as RM delivers the message BTS fans had been waiting for. "Hi all Voice fans. We are BTS! Ready for the big announcement? We're performing our single 'Boy With Luv,' on the live Voice finale on May 21 on NBC. We're so excited. See you then!"

The Voice followed that video up with a full list of the finale's performance lineup. In addition to performances from BTS, The Jonas Brothers, and Taylor Swift and Brandon Urie, other artists like Halsey, Khalid, One Republic, and Hootie & The Blowfish have also been added as performers.

Fans still haven't been filled in on why, exactly, the announcement they were expecting on May 14 was delayed for so long, and it felt particularly duplicitous to fans that any mention of the announcement had been deleted from The Voice's socials. But if it's any consolation, The Voice seemingly acknowledged having made fans wait longer than expected in their tweet, writing, "The announcement you've been waiting for!" Right... fans had been waiting quite some time.

Although fans are still a bit put off by how this announcement was rolled out, overall, they're willing to let bygones be bygones now that the boys' performance on the finale is confirmed. After all, when it comes to supporting BTS, nothing can stop the ARMY. Not even a sloppy announcement rollout.

Yup. I think it's pretty safe to say the BTS ARMY will be tuning in to catch the group's The Voice performance on May 21! It's also probably safe to say The Voice won't make the same mistake twice and will follow through by actually airing the performance like promised.