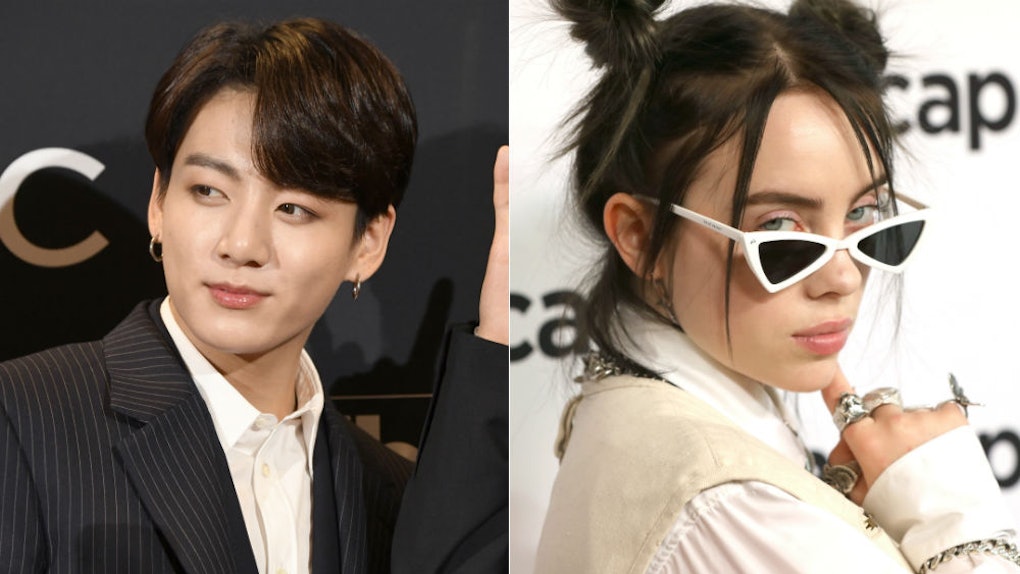 The Video Of BTS' Jungkook Dancing To Billie Eilish's "Bad Guy" Is So Epic, It's Ridiculous

I don't know what has gotten into Jungkook when it comes to his social media habits, but whatever it is, I'm not mad about it. Jungkook has never been shy on Twitter, that's for sure, but in recent months, he's been taking his Twitter game up a serious notch. Whether's he's letting his goofball flag fly by posting gloriously weird videos of himself eating different foods or getting beautifully sentimental by sharing behind-the-scenes looks at his car rides back to the hotel after a show, Jungkook has been living his best life on Twitter. The latest addition to BTS' maknae's epic tweet-storm is this video of BTS' Jungkook dancing to Billie Eilish's "Bad Guy." I'm telling you right now: It's epic. It's ridiculous. It's irreverent. It's a cinematic masterpiece. There's not one box it does not tick off.

The 20-second clip starts off with Jungkook standing in his hotel room in his over-sized grey t-shirt and sweatpants, giving off major tough-guy vibes with his arms crossed as he mouths the lyrics, "I'm the bad guys," of Billie Eilish's track playing over the video. All the sudden, there's a smash-cut and Jungkook's in his bathroom filming himself in the mirror (his hair is so gloriously fluffy guys... I can't). Once he delivers Eilish's iconic, "Duh," it's onto endless chaotic smash-cuts to different clips of Jungkook dancing, each one more ridiculous(ly adorable and endearing) than the last.

Jungkook seems to be trying to keep a straight face throughout the video, but there are some sections where he seems to be cracking up (understandably).

My favorite part is, without a doubt, the very last shot where Jungkook is clapping his hands over his head widely. It reminds me of the "Baby Shark" song, and "Bad Guy + "Baby Shark" = BEST THING EVER.

I can't stop loving everything about this video. Actually, every time I rewatch it (which is more times than I'm willing to admit), I notice one more thing I love about. Like, for example, I can't stop thinking about how Jungkook and Billie Eilish has something major in common: they both like wearing baggie clothes. Jungkook's casual wear would definitely be Eilish approved.

As I mentioned before, this is just one more addition to Jungkook's recent extra AF Twitter posts. Remember that time he decided to film himself eating deep-dish pizza in Chicago and didn't account for the sticky cheese and the whole video just dissolved into him sucking and slurping the cheese until he finally gave up and stopped the video?

He shared his apple-eating with us, too.

Things have taken a sentimental turn often times, too. Like the time Jungkook was riding down the streets of Chicago after BTS' concert and posted a video of himself staring longingly into the camera lens as the beautiful song "Clouds" by Before You Exit played in the background.

Then there are all those videos Jungkook filmed of J-Hope jokingly singing the concert intro to "Dionysus" that literally had me on the floor laughing.

Basically, I have no clue what to expect whenever I press play on a Twitter video Jungkook posted and I wouldn't have it any other

More like this
Demi Lovato's "Dancing With The Devil" Video Recreates Moments From The Day She Overdosed
By Michele Mendez and Brandy Robidoux
Rosé From BLACKPINK's "Gone" Music Video Is The Ultimate Sad-Girl Aesthetic
By Abby Monteil
What Does Taylor Swift's Vault Door Video Mean? Fans Are Decoding It
By Cianna Garrison
Stay up to date