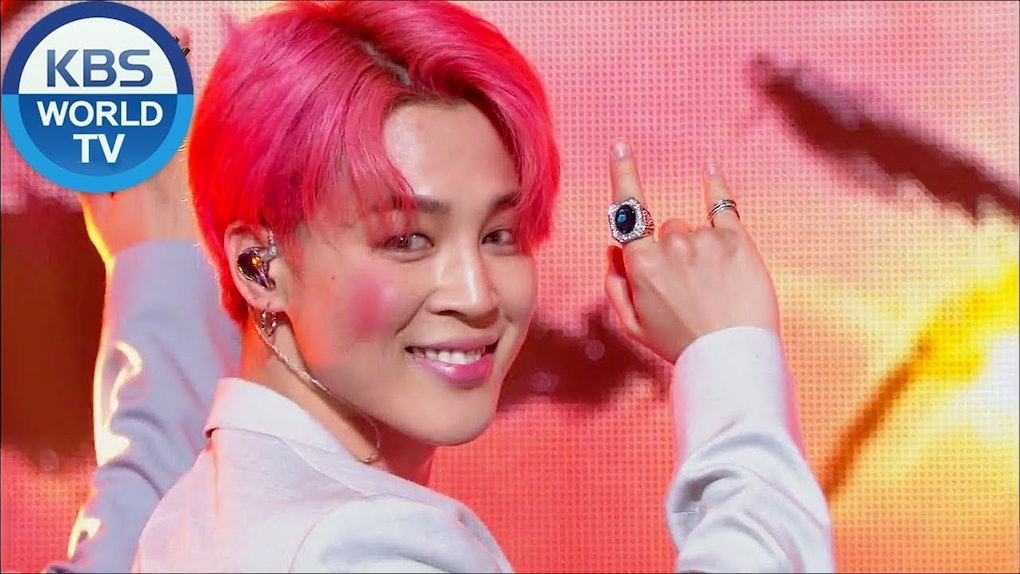 Another day, another opportunity for BTS to slay the stage on another Korean music show. On April 26, BTS returned to Music Bank to perform "Boy With Luv" for the second time. As always, they killed it. Jungkook, V, Jimin, RM, J-Hope, Suga, and Jin popped and locked, hitchhiked, and crooned their way further into every ARMYs' heart. And the cherry on top was that Jimin was the "ending fairy," which means that the final shot stalled on him for a good five seconds as he held up the sign-language symbol for "I love you" for every ARMY to see. (Shout out to his adorable little pinky, which made a glorious appearance.) But a video of BTS' Jimin cringing over his "Boy With Luv" ending pose while watching the playback has me and the rest of the BTS ARMY asking one perplexing question: Why are you embarrassed, bruh?

So, here's what happened in the fan footage from behind the scenes: All the boys are on stage watching the performance play back and bouncing along happily to the music – except for Jimin who's kind of standing there with this scared, "Oh God, here it comes," look on his face. Then, he sees the moment he does his adorable ending pose (that literally made my heart burst)... and he laughs at himself before hiding his face and crouching down onto the ground in what body language experts (read: I, a human with eyes) call full-cringe mode.

Watch the video of BTS' performance, including Jimin's cute AF ending pose, below:

And then here's the fan footage of Jimin's reaction behind the scenes:

So, again, I have to ask: Jimin, WHY SO EMBARRASSED?

I think I can objectively say... OK, I'm not objective at all, because this is BTS we're talking about here. But I can safely say that anyone with eyes will find Jimin's ending pose cute. Casual fans may even say it was adorable. BTS stans' hearts definitely burst on sight. And hardcore stans with a Jimin bias? Let's just say they may have considered dialing 911 after seeing that ending pose.

And yet, Jimin cringed. There are a couple fan theories as to why Jimin cringed. According to fan accounts of the pre-recording (at which cameras are not allowed), Jimin was having trouble with his ending pose.

Apparently, the camera lingered on him a lot longer than he was used to, so he was unsure what to do with his face. Which, like, fair. I get uncomfortable when a camera that's 15 feet away is on me for one second, never mind having an HD camera all up in my face for an extended length of time.

Another account of the pre-recording revealed that Jimin felt like his pinky was betraying him because he has "no strength" in it. Apparently, another member suggested he wink... but Jimin revealed he can't do that either.

Awwww, poor Jimin. So, the consensus among fans seems to be that what made Jimin cringe was a mixture of his long ending pose and the overexposure of his little pinky.

If I take off my BTS-stan goggles and try to be objective for a hot second, I can sort of see where Jimin is coming from (if fan theories are right about why he cringed). I mean, like I said, being on camera that closeup for any length of time must feel absolutely mortifying, and as beloved as Jimin's little pinkies are to ARMYs (look, I'm the president of their fan club), Jimin often stretches them out before putting them on display, which means he may get shy about the attention they garner.

But putting back on my BTS-stan goggles, I just have this to say to you, Jimin: With the power invested in me as the President of Jimin's Little Pinkies fan club, I declare that you have absolutely nothing to cringe over. Your pinky is a treasure. This may be controversial, but if I could rank every pinky in BTS on a scale from "normal pinky" to "exceptional pinky," yours would come out on top of the list. And that's the tea.

More like this
BTS' Jimin & Jin's Videos Singing In A Car Are A Surprise A Cappella Concert
By Abby Monteil
Khloé Kardashian's Response To Her Unretouched Bikini Photo Leaking Gets Honest
By Brandy Robidoux
These Tweets About Jimmy Fallon's TikTok Dance Follow-Up Segment All Say It's Too Little, Too Late
By Brandy Robidoux
Stay up to date