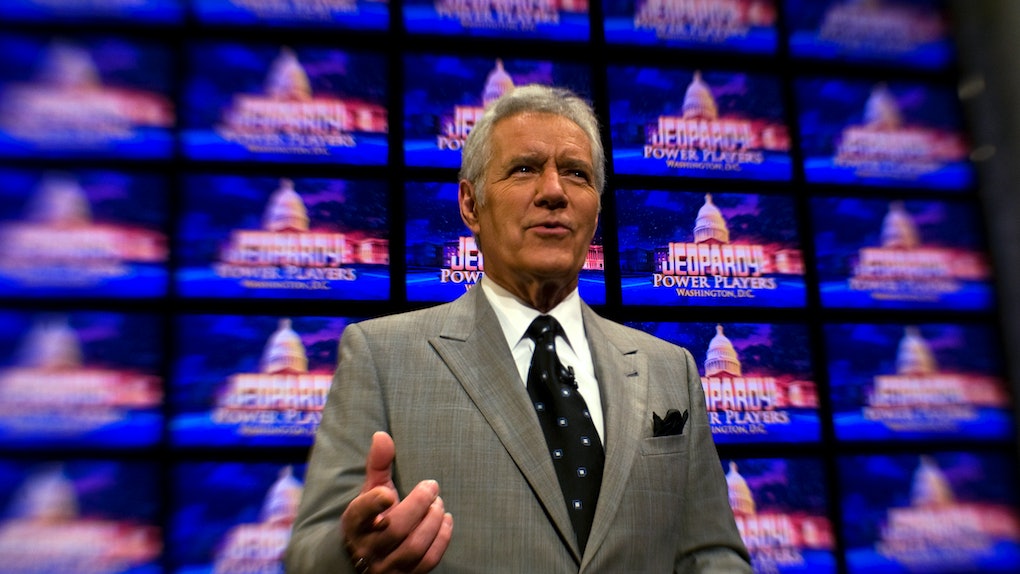 The Tweets About The "We Love You, Alex" 'Jeopardy' Answer Will Have You Sobbing

The latest Jeopardy clip making the rounds on the internet is a truly heartwarming one. People on Twitter are holding back tears after a contestant shared a meaningful message to host Alex Trebek on a recent episode of the game show. Check out the tweets about the "We love you, Alex" Jeopardy answer, but I'm warning you, you may just end up sobbing.

During the "Final Jeopardy" round of an episode of the show that aired on Nov. 11, contestants were prompted to name an 1890 exposé about poverty in New York, according to a Twitter video of the show. When it was contestant Dhruv Gaur's turn to reveal his answer, Trebek prepared to read an answer to the question but instead, found that Gaur had written, "We love you, Alex!" next to his wager of $1,995. The contestant, who had apparently written the heartwarming message in support of Trebek's ongoing battle with pancreatic cancer, prompted the host to choke up and respond, "Oh, that's very kind. Thank you."

Trebek announced this past March that he was diagnosed with stage 4 pancreatic cancer, according to CNN. "Just like 50,000 other people in the United States each year, this week I was diagnosed with stage four pancreatic cancer," Trebek said in a special Jeopardy video announcement. Though the diagnosis has "low survival rate statistics," the unflappable Trebek vowed to beat to keep fighting, even joking that he still has three years under his contract at Jeopardy.

Contestant Steven Grade shared on the Jeopardy subreddit on Reddit some of the apparent backstory to Gaur posting the sweet message and Trebek's tearful response. "This episode was taped the day after Alex announced that he would be undergoing another round of chemo," wrote Grade. "Even without that, I have no doubt that Dhruv would have left the same message and I have no doubt that Alex would have reacted the same way. It was an emotionally charged few days for all of us for a whole host of reasons and thinking about that moment still gets me to tear up." In response to the internet frenzy surrounding the touching moment between host and contestant, Gaur himself took it to Twitter to share what happened. He explained how he kept thinking about Trebek when Final Jeopardy came up, so instead of trying to puzzle it together, he thought of the now famous "We love you, Alex" solution. In a series of four Tweets, he concluded, "I'm just very grateful I got the opportunity to say what I know everyone was thinking. Sending all the love. #weloveyoualex."

Jeopardy fans shared their reactions to the clip on social media. There was an outpouring from devout fans who commented how watching Jeopardy has changed their lives and even gotten them through tough times.

There are truly no shortage of full cry face memes this time around.

The tributes to the beloved Jeopardy host all underscore his work ethic and character.

Trebek has no plans to step down from his role until he is unable to host the show, according to an October 2019 interview with CTV, so you can expect to catch him in upcoming episodes. It's clear Trebek is a fighter in every sense of the word, and wholly deserves the tributes fans are paying to him. We love you, Alex!