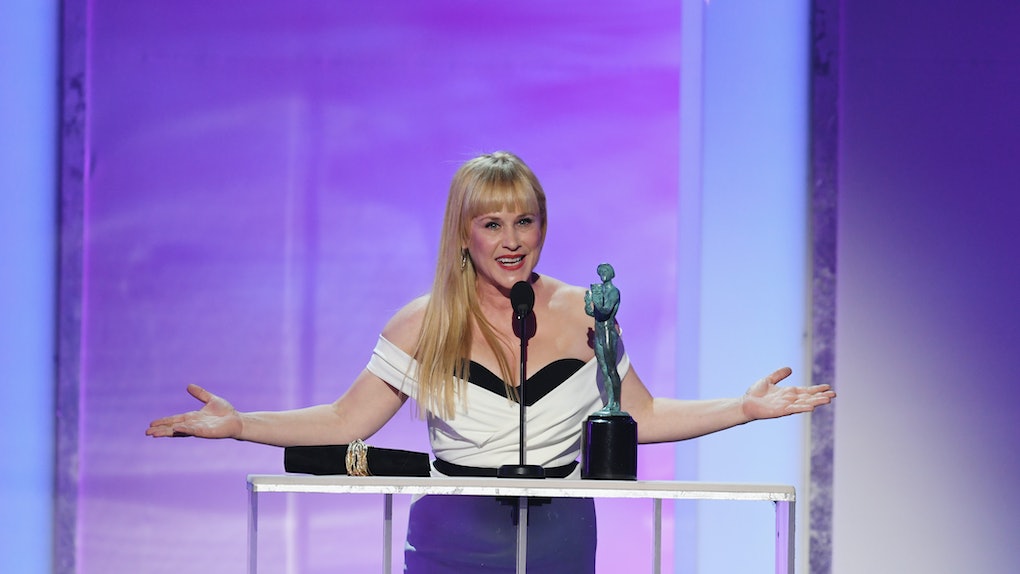 If you happen to be watching the SAG Awards right now, you probably cheered when Patricia Arquette won the Outstanding Performance by a Female Actor in a TV Movie or Miniseries nomination for her leading role in the Showtime series Escape at Dannemora. The win was incredibly well deserved, but the best part was her speech. In fact, these tweets about Patricia Arquette's 2019 SAG Award shoutout to Robert Mueller are absolutely amazing.

When Arquette took the stage to accept her SAG Award, she made a shockingly political speech that had the majority of Twitter grinning from ear-to-ear. At most award shows, nominees usually tend to thank their parents, significant others, grandparents, and maybe even their BFFs. However, the esteemed mini-series actor ended up thanking someone that definitely wasn't sitting in the audience: Robert Mueller. That's right — Arquette thanked Mueller in her SAG speech for "making sure the United States of America has sovereignty," and TBH, it was absolutely hilarious.

Maybe you don't keep up with U.S. politics, and if that's the case, Special Counsel Robert Mueller is currently leading the investigation into Russian interference in the 2016 presidential election. President Trump has repeatedly denied any collusion between the Trump campaign and Russia, and he's called the investigation a "witch hunt." Mueller's latest indictment in the investigation came on Friday, Jan. 25, when longtime Trump associate Roger Stone was indicted on one count of obstruction, five counts of making false statements, and one count of witness tampering. In a statement on Jan. 25 Stone said, "I look forward to being fully and completely vindicated." He also "categorically" denied working with Russians, and said that he would not testify against President Donald Trump. "I have made it clear I will not testify against the president, because I would have to bear false witness against him [to do so]," he said. The White House did not respond to Elite Daily's request for comment on the matter.

Anyway, as Arquette accepted her SAG Award, according to The Hollywood Reporter, she said:

Thank you Robert Mueller and everyone working to make sure that we have sovereignty for the United States of America.

LOL, it was hilarious and totally unexpected. And obviously, Twitter was all about it. Check out the tweets about her speech, below.

Wow, that was awesome. Hollywood definitely needs more vocal actors like Arquette, if you ask me.

The Boyhood star also decided to speak up about another important issue: production companies that don't pay their actors overtime. She said this happens regularly, recommending that actors keep records of their schedules and call sheets, to ensure they get paid fairly.

In her speech, Arquette said:

One order of business. Some production companies are not paying people their overtime and their meal penalties. So start taking pictures of your schedule G and call sheet, because actors depend on that.

Paying your employees their fair wage is — without a doubt — another highly important issue that definitely deserves more attention. IMO, addressing it was definitely a good idea, especially while others in the audience are most likely experiencing the same kinds of issues.

Everyone at the SAG Awards has delivered excellent speeches thus far, but Arquette's was particularly notable. Not only was it hilarious (I mean, for real — she gave a shoutout the FBI at one point!) but also, she pointed out some essential issues that definitely require more attention. Cheers to speaking your mind, always and forever. I don't know about you, but Arquette is definitely winning the key to my heart right now.