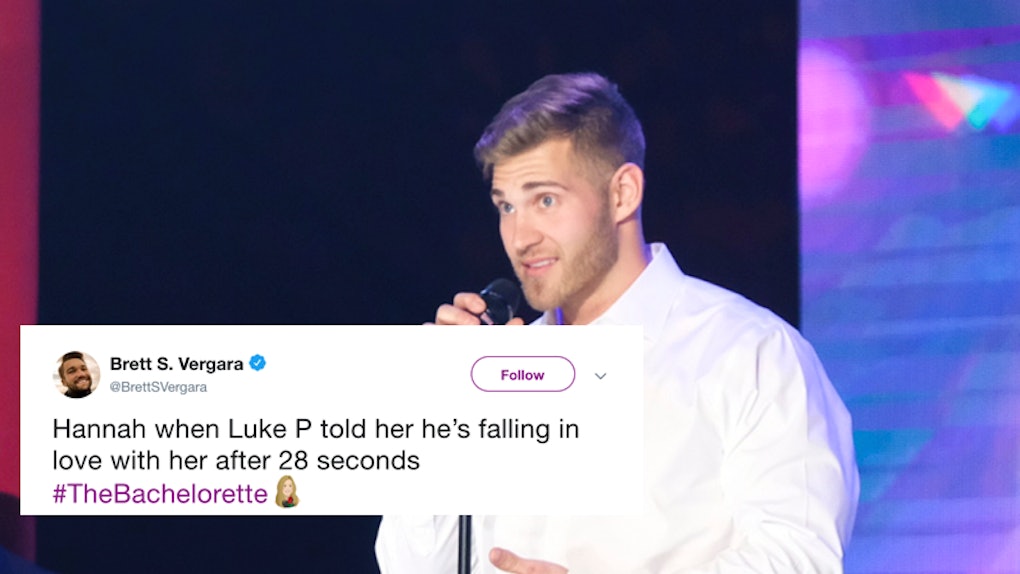 On Episode 2 of Hannah's season of The Bachelorette, she made it very clear that she's setting out to find her Mr. Right. In fact, she's so focused on her goal that she held an official Mr. Right competition with half the men vying for her heart, just to see how they all stack up against each other. Like any good pageant, the men had to compete in both a beauty portion and a talent portion. While most of the guys went with more traditional talents like riding a unicycle or singing a song, Luke P. decided to do something a bit more unconventional when it was his turn to take the stage. For his talent, Luke told Hannah that he's already falling in love with her, and Bachelor Nation has a lot of feelings about it. These tweets about Luke P. saying he's falling in love with Hannah all point out that he's moving a little fast.

As the words came out of his mouth, even Luke P. himself said that he couldn't believe he was saying it. And yet, Luke P. not only said that he was falling in love with Hannah, but he also planted a big kiss on her as she sat at the pageant judge's table. It was a bold move, but apparently he's falling fast.

Luke P. expected his proclamation of love to win him some big points, and he got what he was hoping for. He was crowned Mr. Right thanks to his grand gesture but, still, fans on Twitter were suspicious of him.

Even though fans were not smitten by Luke P.'s talent for sharing his feelings, he did make a good impression on Hannah. After the Mr. Right competition, Hannah and Luke P. had some alone time to debrief. Hannah wanted to make sure that Luke P. was serious. She said, "Words are so important to me and I just want to make sure you’re so sure."

Luke responded to Hannah by assuring her that his feelings are real and strong. "I started developing feelings for you before I even met you," he said. "I’ve never felt a connection like this in my entire life. My feelings for you have been growing so fast."

Since Luke P. has already made it clear that he's in it for the long haul with Hannah, some fans in Bachelor Nation are already calling him the winner of the entire season.

Luke P.'s strong feelings seem to be winning Hannah over. The two had a steamy make-out session at the mansion, and Hannah explained that Luke P. makes her feel excited and she feels like she wants to zone in on him. "He’s saying everything my heart needs him to say," she said.

Even though Luke P. was crowned Mr. Right, he didn't walk away from the pageant group date with a rose. But he's definitely caught Hannah's eye... and possibly her heart.