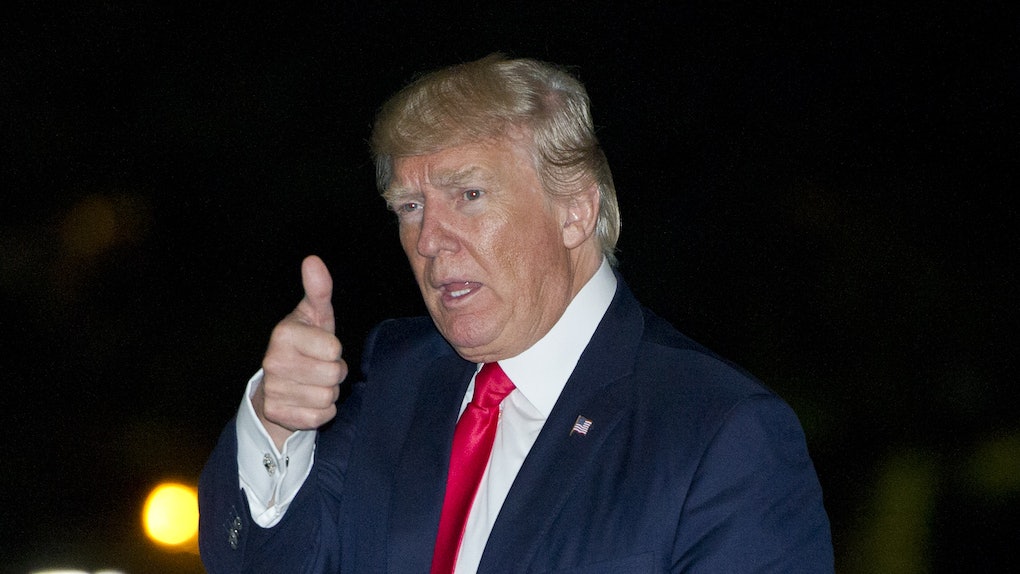 It's the 17th anniversary of the Sept. 11 attacks — the tragedy that resulted in the deaths of nearly 3,000 people — and President Donald Trump had a rather... odd response to the occasion. While traveling to a memorial service in honor of the attack on the morning of Sept. 11, he was spotted emphatically pumping his fists, which sparked swift and widespread backlash online. The tweets about Donald Trump fist-pumping on 9/11 are seriously going in on the president for the seemingly insensitive gesture on such a somber day.

The drama kicked off after President Trump and first lady Melania Trump arrived in Pennsylvania ahead of an appearance at the Flight 93 memorial — the site where one of the planes crashed during the Sept. 11 attacks, after flight crew and passengers thwarted a hijacking by a group of terrorists. In the photo, Trump can be seen raising both of his fists in the air and giving off a perplexing facial expression, which prompted outrage on social media.

"Fists in the air happy Mr President this is not a campaign rally you are attending this is a somber remembrance of innocent lives lost. This is disgusting," one Twitter user wrote.

Film director Morgan J. Freeman shared a bold message in support of those who lost their loved ones in the attacks, writing in part, "please know that our country is with you, even if our President is not."

Trump has seemingly failed to appropriately honor the attacks in the early hours of Sept. 11, 2018. Instead of posting about the victims or the event itself, he rang in the occasion by posting multiple tweets about the Department of Justice (DOJ), the FBI, and special counsel Robert Mueller's ongoing investigation into Russia collusion.

Trump followed up by barely acknowledging the tragedy, only offering up this retweet:

He then continued to tweet about the FBI and DOJ, before posting a tweet in praise of his attorney Rudy Giuliani, who was the mayor of New York City at the time of the attacks.

Finally, he shared a simple, "17 years since September 11th!"

Trump has also sparked criticism for the way he's responded to the tragedy in the past. In 2013, he infamously tweeted about "haters and losers," writing: "I would like to extend my best wishes to all, even the haters and losers, on this special date, September 11th.”

He also faced backlash on the day of the attacks after he bragged about having the tallest building in the area following the destruction of the Twin Towers. Trump told New Jersey's WWOR:

Until Trump offers up a solid response to the Sept. 11 attacks, he can bet that there won't be any shortage of outrage rolling his way.