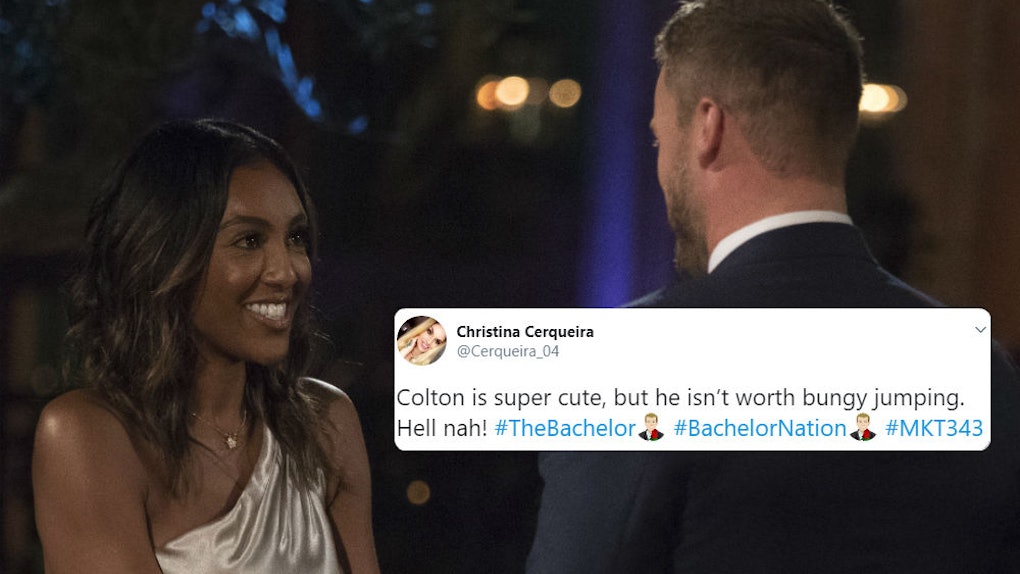 Episode 4 of Season 23 of The Bachelor saw Colton and the remaining ladies travel over international waters to Singapore and, while there, Tayshia got to take her relationship with Colton to new heights... literally. Tayshia and Colton took the leap together and went bungee jumping off a platform on a beach, even though both said they were terrified of doing it. Tayshia said that she was happy to have faced her fears of jumping with Colton, but fans have some other feelings. These tweets about Colton and Tayshia's Bachelor bungee jumping date show just how wild Bachelor Nation found this daredevil date.

When Tayshia got the one-on-one date card, her only clue about their activity was "let's fall in love," which sounds super romantic. But as Colton took her for a quiet stroll along the shore, their date took a reckless turn when they came across a bungee-jumping platform. Turns out, "let's fall in love" meant it was time for them to literally fall multiple stories together. Tayshia was a little reluctant when Colton suggested they try bungee jumping, but they decided to go for it together.

A lot of folks in Bachelor Nation, though, would have made a very different decision.

Some fans even felt like the terror of bungee jumping was visceral that they were scared, even watching on TV in their own homes.

On the other hand, some folks on Twitter were inspired by the adrenaline rush of bungee jumping and found a new date idea to try out.

Other fans noted that Tayshia and Colton going bungee jumping actually hearkens back to some old school Bachelor seasons when more of the dates used to feature fear-inducing feats. There's an old saying that falling in love is like taking a scary leap of faith, so it does make sense to have Bachelor contestants face some other fears while looking for love.

Then again, wouldn't it maybe make more sense for the contestants on The Bachelor to try out the more mundane activities that couples do every day together? I don't know about you, but bungee jumping has never been a part of my routine in any relationship I've had. Fans on Twitter also think that maybe The Bachelor should feature some more grounded relationship moments.

After bungee jumping, Tayshia and Colton got to relax down at sea level with a romantic dinner. Over their candlelit meal, Tayshia told Colton that she's been married before. The vulnerable moment turned out to a really special milestone in their relationship, since Tayshia's revelation encouraged Colton to talk to her about his parent's divorce. That deep emotional sharing might have been scary, but chances are it still wasn't nearly as scary as a surprise bungee jumping date.