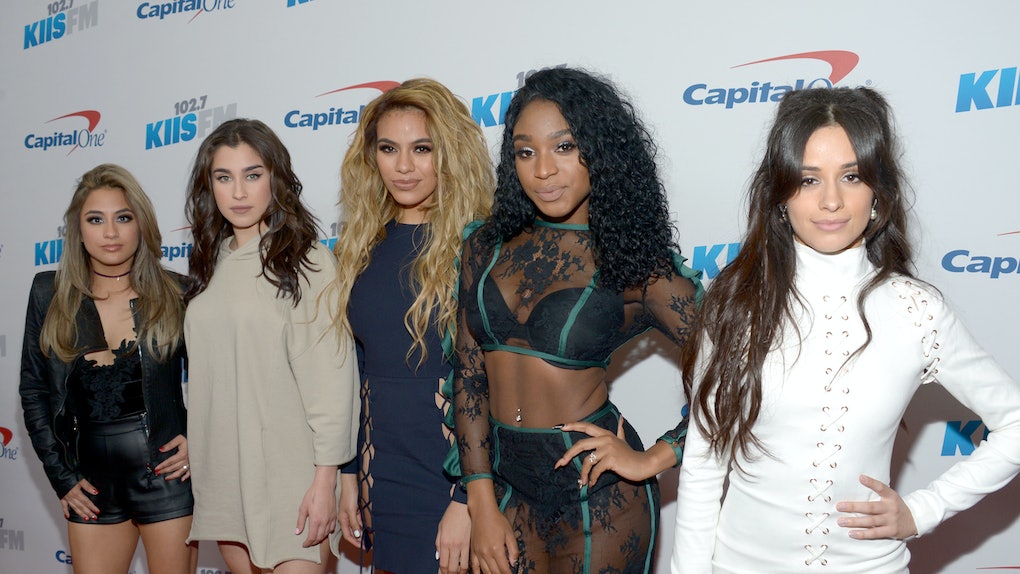 It’s been over two years since Camila Cabello left Fifth Harmony and, since then, there’s been tons of speculation about a potential feud between Cabello and her former bandmates. While, at present, all parties involved insist there’s no ongoing feud, it was a rocky road getting to this point. Since keeping track of all that’s gone down over the past couple years is no easy feat, I thought it would be best to document all the ups and downs of Cabello’s relationship with Fifth Harmony since their split. So, here's the timeline of Camila Cabello and Fifth Harmony’s feud.

Given all that’s happened over the years, it’s hard to know where to start when it comes to these ladies. But I guess the best place to begin this timeline is with that icy statement Fifth Harmony released after Cabello left the group.

“After 4 and a half years of being together, we have been informed via her representatives that Camila has decided to leave Fifth Harmony. We wish her well,” the group said in their statement.

Just that part of the statement sends shivers down your spine, doesn’t it? And if the group’s version of Cabello’s departure is true, then it seems like there were deeper issues at play behind the scenes. Yikes!

You can check out the rest of their statement down below:

But that’s not all that happened in December! Cabello had her own version of events and released a statement that same day claiming to be totally blindsided by Fifth Harmony’s post.

"The girls were aware of my feelings through the long, much-needed conversations about the future that we had during the tour. Saying that they were just informed through my representatives that I was 'leaving the group' is just not true," she wrote in her statement, which you can read below:

But, wait. There’s more! Fifth Harmony responded to Cabello’s tweet with an even more detailed account of how things went down: “We were truly hurt,” the group wrote in a statement posted to Twitter. “We've been together for almost five years, been through ups and downs... While this isn't the way any of us would have wanted this chapter in our lives to have ended, we have to begin to formulate a plan and constructive path for Fifth Harmony to move forward, beyond Camila. We truly support anyone's decision to do what makes them happy and to that end we do wish Camila all the best, although we are saddened by the way she and her team handled the situation.”

So, all in all, they didn't quite get their stories straight before announcing to the world that Cabello would be leaving the group.

In February 2017, Cabello was featured on the cover of Seventeen — her first cover since leaving Fifth Harmony. In her interview, she talked at length about leaving the group and explained why it was the best creative decision for her.

“Fifth Harmony wasn’t the maximum expression of me individually,” she said. “My goal is to be brave and open up my soul.”

She also talked about how supportive her family, friends, and fans were of her decision to leave the group. “Honestly, I didn’t expect it,” Cabello said. “I was so emotional at that point, that when I saw some really encouraging things people were saying, I burst into an ugly cry.”

As if that wasn't enough Fifth Harmony talk, Cabello also dished about her decision to leave the group to Billboard that same month.

"We didn’t write our records. We were interpreting somebody else’s story,” she explained. “Fifth Harmony is an entity or identity outside all of us, and I don’t think anybody felt individually represented by the sound — we didn’t make it.”

In the Billboard interview, Cabello explained that she hadn’t been in touch with Fifth Harmony since she left the group. When asked if she'd reached out to them herself, Cabello clammed up a bit.

“I did, yeah. I don’t want to get into the details of that, because it was really intense and it’s hard for me to talk about. It makes me sad,” she said.

In April 2017, Fifth Harmony was featured on the cover of Galore, their first cover without Cabello. And in their interview, the girls didn’t shy away from saying how “in sync” they felt even without Cabello.

"It’s really great because the four of us are really in sync with each other," Ally Brooke said during the interview. "We’re pretty open about most things. We try to respect each other as much as we can. For us, communication is really important. Also we enjoy a lot of the same things as each other! Like going to get frozen yogurt, or go to the movies, or talk about boys, exchange music, have fun at the red carpet and encourage each other with, 'Hey, you look beautiful!'"

It might seem like nothing, but if you read between the lines, there seems to be a jab directed at Cabello in there.

July 2017: Fifth Harmony takes aim at Cabello during an interview

In July 2017, things got even more prickly between Fifth Harmony and Cabello. In an interview with Billboard, Fifth Harmony seemed to take aim at Cabello when asked how the group’s dynamics changed since their former bandmate’s departure.

In the interview, there was some question about how awkward Cabello’s departure was for everyone who was following the story. That’s when Lauren Jauregui chimed in with, “Try experiencing it.”

Normani Kordei agreed. “I was literally going to say that,” she said. “I get to sleep at night knowing we did everything in our power as friends, bandmates, and human beings.”

August 2017: Fifth Harmony refuses to talk about Camila, then disses her at the MTV VMAs

While recording a podcast episode with Dan Wootton for his show Bizarre Life With Dan Wootton, Fifth Harmony evaded any and all questions about Cabello. I mean, they had a good reason for doing so, but it didn’t do much to quell the rumors of an ongoing feud.

“We want to talk about our new music. We don't want to be shady, man," Jauregui said when asked about Cabello’s exit from the group.

When Wootton asked if the group had a problem with his questions, Kordei chimed in with, "We just have better things to talk about."

Both Wootton and Jauregui addressed the awkwardness on Twitter with... even more awkwardness:

That same month, when Fifth Harmony performed at the MTV Video Music Awards, they further fueled rumors of a feud. At the start of their performance, they had a stand-in for Cabello that was flung off stage almost as soon as they started singing.

According to Ally Brooke, the performance was meant to symbolize something more than discarding Cabello.

After a few months of relative silence, Cabello decided she was ready to open about about Fifth Harmony, their VMAs performance, and how she was feeling about it all.

In an interview with Rolling Stone, Cabello opened up about why she was hesitant to rehash any Fifth Harmony drama. "A lot of my fans were, or are, fans of the group," she said. "I don't like to ruin the dream. They believed in something that's beautiful. I'm sure with One Direction, too, nobody really saw behind the scenes. You just see the dream."

Then, in another interview with the New York Times that same month, she finally revealed how Fifth Harmony's VMAs performance affected her.

“It definitely hurt my feelings,” Cabello said. “I wasn’t expecting it, I wasn’t prepared for it — especially because at that point I’d moved on from it. I was just like, ‘What? Why?’ I have to make space for the good stuff to happen in my life,” she said. “I don’t like holding onto the past, especially when it’s stuff that, in my opinion, is just petty.”

May 2018: Camila reveals why she left Fifth Harmony

After a year and a half of fan speculation, Cabello finally revealed the real reason she left Fifth Harmony in another interview with Rolling Stone.

"I don’t think there was ever a point where I was like, ‘I want to leave because I’m the breakout star,'" she said. "We were just really young. If we were in the same situation now, it would probably be fine for everyone to make their own music while being in the group, because I think everyone understands now that you can’t limit people. That’s why people break free."

August 2018: Camila reveals she and Fifth Harmony are "in a good place"

During the 2018 MTV VMAs red carpet, Cabello told Access Hollywood that she and Fifth Harmony were "in a good place."

“I don’t like any beefs,” Cabello told Access Hollywood. “I feel like we’re in a really good place now, me and the girls. I saw Normani recently at the Billboard Music Awards and we caught up and I told her I’m super excited for her. I don’t remember the last time I saw the other girls, but I told [Normani] to say the same thing to them. I feel like there’s just been enough time and distance away from the situation that I feel like we’re all genuinely in a good place right now. And honestly, there’s just no time in life for that stuff. What’s the point?"

Based on the photo of Cabello and Normani's reunion, which was posted on Twitter on May 20, it really does seem like the girls were genuinely happy to see each other.

So, even with all the ups and downs, Cabello and her fellow bandmates finally came around and reconciled, which is a true sign of their mutual love and respect for each other. And, really, is that any surprise? They started this wild journey to fame together. No reason why they all can't kiss and make up!