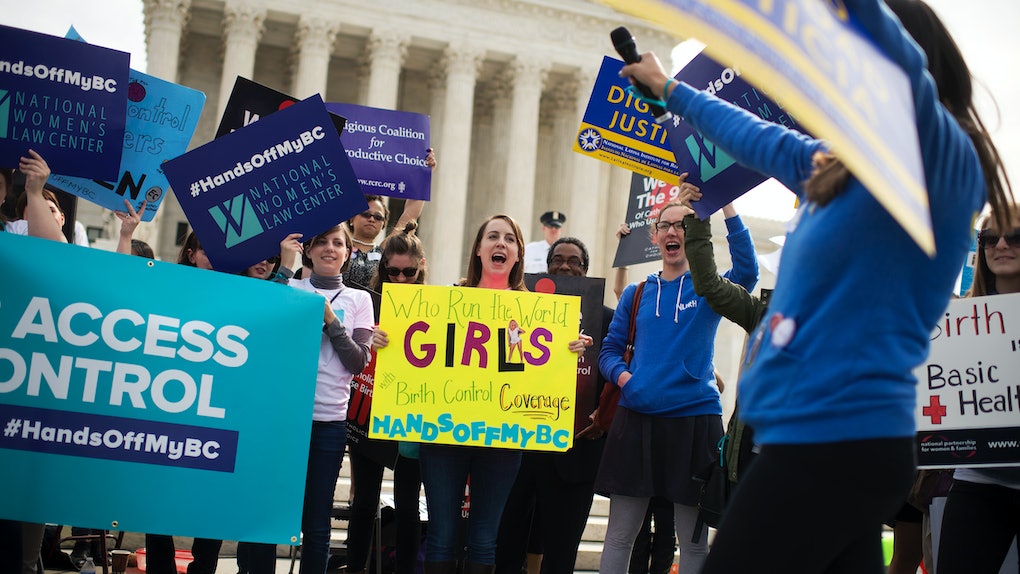 For the third time in 10 years, the Affordable Care Act (ACA) mandate requiring employers to provide free birth control coverage was thrust into the spotlight at the Supreme Court. In Trump v. Pennsylvania, the Trump administration argued in favor of allowing a wider range of employers to deny contraception coverage on religious or moral grounds, while reproductive rights advocates defended the birth control mandate. On July 8, the justices reached a decision in Trump v. Pennsylvania, and the Supreme Court's ruling on birth control lets more employers deny coverage by upholding the Trump administration's 2017 rules.

In 2017, the Trump administration issued new rules that essentially rolled back the ACA's Women's Health Amendment, which required all employers except for religious organizations to provide birth control coverage to their employees at no additional cost. Lower courts in New Jersey and Pennsylvania subsequently blocked these new rules, and the case made its way up to the Supreme Court. During oral arguments on May 6, the Trump administration argued that the ACA actually left the decision to provide birth control coverage to the discretion of agencies, while reproductive justice advocates warned that the Trump administration's new rules could make it difficult for millions of Americans to access contraception.

This isn't the first time that the ACA's birth control mandate has been reviewed by the country's highest court, but this case was a little different. In 2014's Burwell v. Hobby Lobby and 2016's Zubik v. Burwell, two employers with religious affiliations argued that they should be exempted from the Obama-era birth control mandate. In Trump v. Pennsylvania — which was consolidated with another case, Little Sisters of the Poor Saints Peter and Paul Home v. Pennsylvania — however, the main question was whether the Trump administration had the authority to expand birth control coverage exceptions to any employer that claimed a religious or moral opposition. In its ruling on July 8, the Supreme Court ruled 7-2 that the Trump administration did, in fact have the power to enact such rules.

In the majority opinion, Justice Clarence Thomas wrote that "the Third Circuit concluded that the Departments [of Health and Human Services, Labor, and the Treasury] lacked statutory authority" to provide additional exceptions to the ACA statute. But, Thomas added, this decision by the lower court "was erroneous."

"We hold that the Departments had the authority to provide exemptions from the regulatory contraceptive requirements for employers with religious and conscientious objections," Thomas said, explaining the court's decision. Chief Justice John Roberts, along with Justices Samuel Alito, Neil Gorsuch and Brett Kavanaugh, joined Thomas in the majority opinion. Justice Elena Kagan wrote a separate concurrence along with Justice Stephen Breyer, in which she explained why she voted with the court's majority.

Justices Ruth Bader Ginsburg and Sonia Sotomayor disagreed. In the dissent, Ginsburg slammed the Court for leaving "women workers to fend for themselves, to seek contraceptive coverage from sources other than their employer’s insurer, and, absent another available source of funding, to pay for contraceptive services out of their own pockets."

"Ready access to contraceptives and other preventive measures for which Congress set the stage," Ginsburg added, "both safeguards women’s health and enables women to chart their own life’s course. ... The exemption the Court today approves would leave many employed women just where they were before insurance issuers were obliged to cover preventive services for them, cost free."

Reproductive justice advocates also slammed the ruling. Shortly after the decision was announced, NARAL Pro-Choice America President Ilyse Hogue released a statement calling the court's decision "deplorable," and criticizing the justices for giving employers greater control over their employees' contraception coverage. "This decision just further exposes that ultimately, the Radical Right is really about controlling women and our lives with no eye towards equality or public health and well being," Hogue said. "It’s clear that our reproductive freedom is in immediate peril.”

As reproductive justice advocates pointed out in an April 8 amicus brief, the stakes were exceptionally high in Trump v. Pennsylvania. The brief, which was filed by the National Women's Law Center and more than 50 other reproductive justice organizations, expressed concern that the "moral exemption" provision set forth in the Trump administration's rules could potentially enable any employer to deny birth control coverage to their employees. Now that the Supreme Court has ruled in favor of the Trump administration — and of employers like the Roman Catholic nonprofit, Little Sisters of the Poor Saints Peter and Paul Home — CNBC reported that up to 125,000 people could lose their birth control coverage across the country.

In their concurring opinion, Alito and Gorsuch added that the Supreme Court's ruling in Trump v. Pennsylvania was not likely to be the end of the legal battle over birth control coverage, noting that Pennsylvania and New Jersey were "all but certain to pursue their argument that the current rule is flawed on yet another ground" in the lower courts. Indeed, reproductive justice advocates have made it clear that they do not intend to stop fighting for equitable contraception and reproductive health care access, especially given the disproportionate impact of rules like these on people of color, low-income communities, LGBTQ people, and undocumented immigrants.