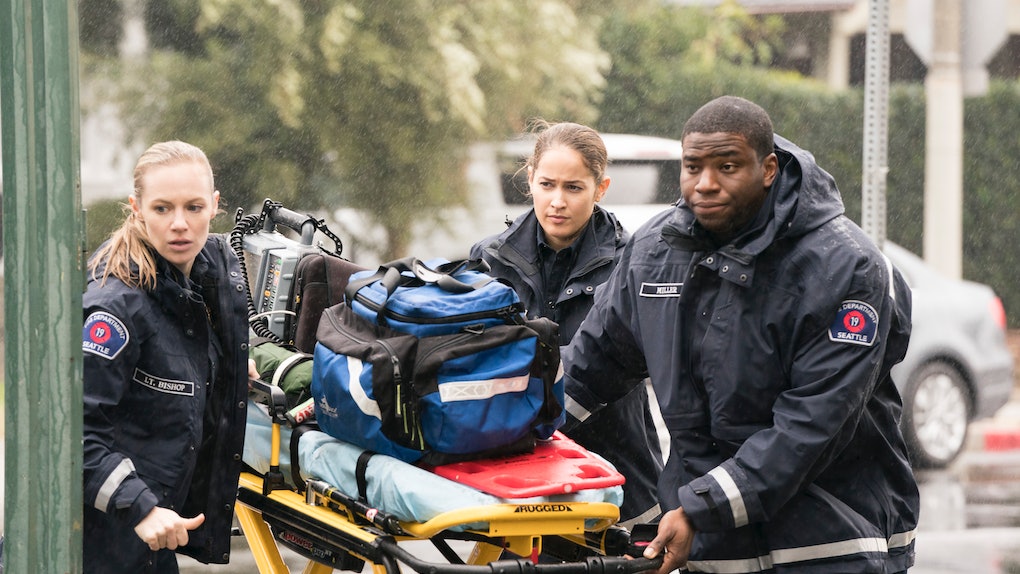 Station 19 returned for its mid-season premiere on March 7, tackling what happened in the aftermath of the windstorm that stranded Andy and Sullivan in a ravine. After fans' minds wrapped around the trippy sensation of rewinding the clock while Grey's Anatomy has surged ahead in the same universe, it was back to business with the Seattle firefighters. If you thought the group's recovery from the windstorm was a lot, brace yourself, before the Station 19 Season 2 Episode 9 promo is as intense as it gets.

March 7's "Crash and Burn" highlighted Andy's (Jaina Lee Ortiz) emotional shutdown four months after the loss of the patient she and Sullivan (Boris Kodjoe) were trying to save during the storm. Meanwhile, Sullivan was struggling with physical therapy sessions as a result of injuries sustained during their accident. Ben (Jason George) pulled, well, a Ben and considered leaving yet another professional field, while police officer Ryan (Alberto Frezza) faced more conflict with his father (Dermot Mulroney).

The promo for March 14's episode picks up on some of these stories, but we can expect them to be handled in quite the dramatic fashion. But that's just the rule of Shondaland, right?

In the promo footage, Ryan's dad pops up again, apparently leaving him with access to a secret stash of money, while Maya (Danielle Savre) and Jack (Grey Damon) run into a commuter emergency on public transportation and enlist other passengers as pseudo firefighters. Back at the station, Pruitt (Miguel Sandoval) is nudging Ben to talk about the potential of leaving firefighting. Finally, Andy is still hooking up with Ryan in between cases, but he seems fixated on why they haven't put a label on their relationship. In between the personal drama, we also see glimpses of the squad diving into action during raging fires.

The ABC synopsis for the episode, "I Fought the Law," actually seems to address scenarios that the promo doesn't include. If that's the case, this must be a jam-packed episode. The summary reads:

When Andy, Maya and Dean respond to a call, they find an injured woman with amnesia; but soon into the treatment process, they realize there is much more to her story. Meanwhile, Captain Sullivan takes Ben and Jack on a house call that quickly becomes a close call for the patient they’re treating, while Ryan may not have seen the last of his father, Greg.

Ahead of the series' return, showrunner Stacy McKee teased what the rest of the season has in store, telling TV Guide:

Well, based on how that promo doesn't quite fit with the network's summary, we can definitely count on the unexpected as Season 2 continues.

More like this
This 'Mare Of Easttown' Promo For Season 1, Episode 5 & Beyond Is So Intense
By Ani Bundel
The 'Cruel Summer' Season 1, Episode 6 Promo Will Make You Question Jeanette
By Rachel Varina
The 'Grey's Anatomy' Season 17, Episode 15 Promo Is A Farewell To Jackson
By Abby Monteil
Stay up to date