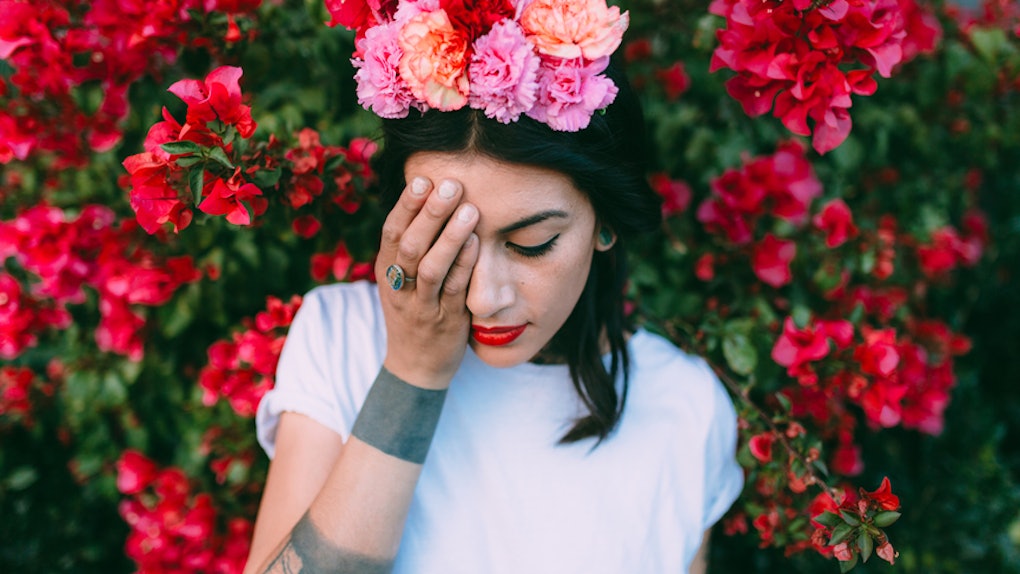 The layer of ice that has been coating our world all winter long is finally beginning to thaw, releasing all the life tucked within. Animals are emerging from hibernation, rain showers are quenching the barren soil's thirst, and precious buds are appearing amongst the green in tiny flecks of color. The natural world had a long slumber over the last few months and now, it's reawakening to embrace something new. We don't even need a calendar to know we're approaching springtime and the spiritual meaning of the vernal equinox will leave you feeling replenished, along with every other living creature we share this planet with.

On Mar. 20, we're finally leaving dreary winter behind for bright and sprightly springtime, at least in the Northern Hemisphere. The sun will begin coming out to play, the air will start smelling of newly blooming flowers, and it's time to get out of your house and get to know a whole new version of yourself. Why? Because the first day of spring is the beginning of everything. It marks the launch of Aries, the first zodiac sign in the astrological calendar, and festivals are held all over the world to celebrate this optimistic seasonal change. Even though the majority of civilization always enters a new year on January 1, the natural world celebrates its own era of renewal at the turn of spring.

It is during both the autumn and vernal equinoxes that the day lasts just as long as the night, which is why "balance" is such a central theme to this naturally intrinsic event. It's during winter that the earth absorbs all the dead that has collected amongst the cold, but the promise of spring wipes our land clean enough to allow for the beginning of something new. Your shadow stretches as long as your lighted self and your emotional spectrum is made symmetrical. Everything from what makes you happy to what makes you sad is brought to a fresh symmetry; you will feel as though spring is an opportunity to start over, to embrace the needs of your purest identity.

Modern witches and Pagans honor the vernal equinox in a celebration known as "Ostara," named after a goddess of Germanic origin whose name roughly translates to "moving in the direction of the rising sun," according to a Bad Witch's Blog. This is a holiday centered on resurrection, much like Christianity honors the passing of Easter as the revival of Jesus. It is when all that has been plaguing the spirit of our world is banished, allowing us to embrace the next stage in the inevitable cycle of existence — birth, growth, death, and renewal.

As flower petals sprout from a tiny seed buried deep in the ground, so do we. The vernal equinox is an opportunity to reach the next stage in your spiritual development. It's a point in time to let go of bad habits, release yourself from toxic relationships, and finally accept that the past shall remain in the past. The future cannot reach us while we're being bogged down by things that no longer matter.

When one story ends, another one is just about to begin. The vernal equinox is just that: a chance to stabilize your soul into a position where it can be renewed, to forgive yourself for your past mistakes so that you'll have the courage to take on another endeavor.

The vernal equinox wants you to take it easy on yourself. While you walk, stop to smell the roses. Whenever you feel sad, appreciate how beautiful the sunlit afternoon looks instead. Take a look at life as though you've just been reborn, with nothing to muddle your perception. The sky is clear and so are you. Anything can happen.

More like this
The Spiritual Meaning Of The April 2021 New Moon Is About Pushing Your Limits
By Roya Backlund
The Netflix Reality Show You Should Watch, Based On Your Zodiac Sign
By Chelsea Jackson
Each Zodiac Sign Has A Lucky Day Of The Week That Goes With It & Here's Yours
By Chelsea Jackson
Stay up to date