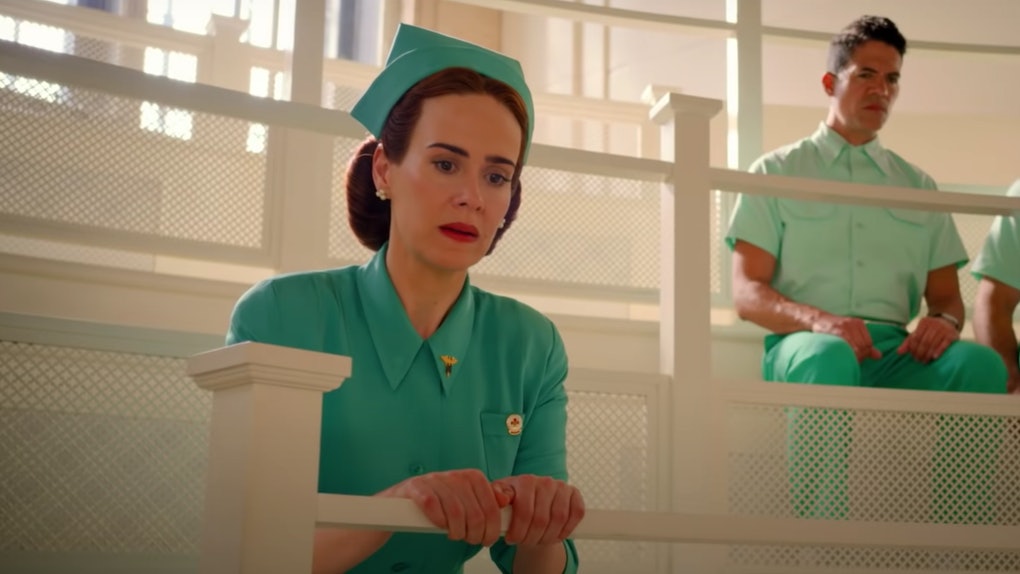 The Similarities Between 'Ratched' & 'AHS: Asylum' Are Honestly Scary

Ratched may be a prequel to the 1975 film One Flew Over the Cuckoo's Nest, but the twisty new Netflix series is actually much more similar to a more recent horror release. Given its creative team and setting, Ratched drew comparisons to the second season of American Horror Story right after it was announced, but watching the whole debut season of the show really drives the likeness home. All of the similarities between Ratched and AHS: Asylum really underline why the new show feels so familiar.

Spoiler alert: This post contains spoilers from throughout Season 1 of Ratched. Much like AHS: Asylum, Ratched begins with Sarah Paulson's character weaseling her way into a mental institution with ulterior motives. In Asylum, Paulson played the determined reporter Lana Winters, who was intent on exposing Briarcliff's unethical practices. In Ratched, Paulson is a similarly determined nurse hoping to help save her imprisoned brother from execution. The show itself seems to poke fun at the similarities between Lana and Nurse Ratched — the first episode has a few characters asking Ratched if she's a reporter. One of those characters is a gas station attendant, which could also be a subtle nod to Evan Peters' Asylum character, Kit Walker.

Mildred Ratched isn't the only character who evokes one of the leads from Asylum. Mildred's brother, Edmund Tolleson, is a convicted serial killer whom the orderlies at Lucia State Hospital are tasked with observing in order to determine if he is fit to stand trial for his crimes. The role is very similar to Kit in Asylum, with the only difference being that Edmund actually did commit his crimes, whereas Kit is innocent.

The similarities are also very apparent in both shows' subject matter. Obviously, they are both set in mental health institutions during the middle of the 1900s in America — more specifically, both shows explore experimental surgeries, body horror, and have religious elements. Of course, the religious elements in Asylum are much more overt, since Briarcliff is run by nuns and demonic possession is a big part of the story, but Ratched also includes a darker side of Christianity as Edmund murdered a group of priests.

With Paulson's character being attracted to women in both shows, they both also focus on dangerous procedures to "cure" homosexuality. Both series are set before homosexuality was removed from the Diagnostic and Statistical Manual in 1973, so Sister Jude was able to have Lana committed to the asylum once she learned she had a female partner. Likewise, Mildred was upset to witness Dr. Hanover and Nurse Bucket administer lobotomies and hydrotherapy on lesbian patients.

These medical experiments also led to some messed-up body horror in both shows, especially when looking at Henry Osgood in Ratched and Shelley in AHS: Asylum. Both characters wound up with their limbs amputated by a doctor performing dangerous experiments, although Henry was able to live a lot more comfortably than Shelley.

Really, the only major element of AHS: Asylum that isn't present in Ratched is aliens, which is probably for the best.

More like this
Shonda Rhimes' Quote About Regé-Jean Page Leaving 'Bridgerton' Is SO Shonda
By Rachel Varina
'Never Have I Ever' Season 2: Release Date, Cast, Trailer, Photos, & More
By Ani Bundel
'Ginny & Georgia's Sara Waisglass Has Big Dreams — & They Involve 'SNL'
By Lexi Williams
Stay up to date