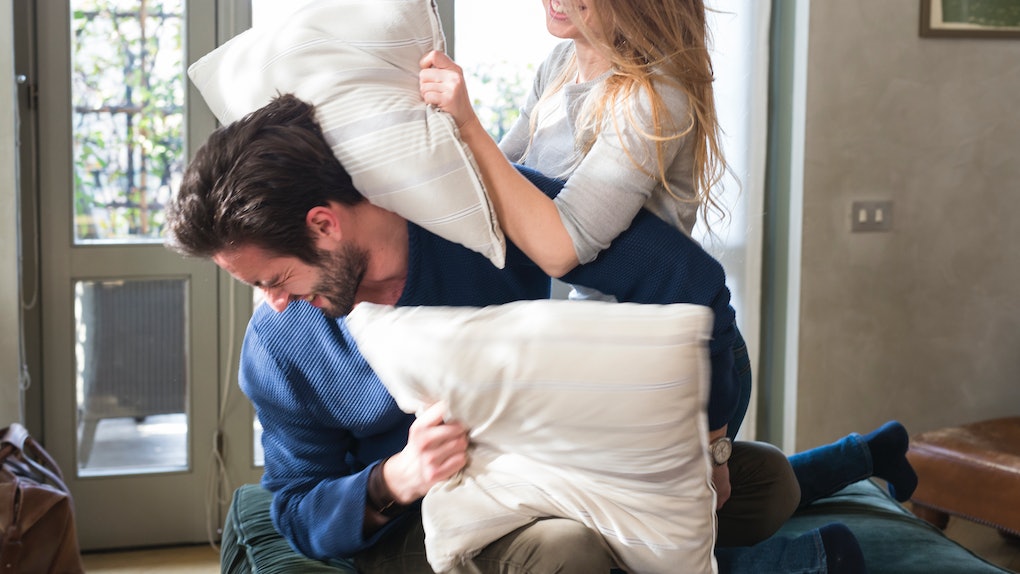 The Silliest Relationship Fights, According To 11 Women

You think your relationship fights are bad? Have you ever run a marathon out of spite? Yeah, me neither, but I did threaten to once when an old flame told me I needed to "rest my ankle" (I will decide for myself what to rest, thank you very much!). You may have had some fights with past partners that were no fun at the time but in retrospect are just silly — I know I have, and I'm glad I didn't run that marathon. This is something a lot of people can relate to, so I gathered a list of some of the funniest, silliest relationship fights from women who've been there before.

Reading what other women have fought about might provide some context for your own relationship arguments. Of course, there are often very legitimate reasons to be upset (the stories below included), but sometimes when we argue, we can later look back and laugh. Having a sense of humor can make a lot of fights better, and it's always fun to have a laugh as long as both people agree the situation was funny. It's also fun to not run marathons (although running marathons sounds fun too, especially the carb-loading part).

I told my ex that I wanted to name my first born "Coleman", my maiden name, and he told me no, that was stupid, and the name didn't mean anything if it wasn't after a specific role model in history.

I got in a fight with my ex because I showed him a picture of my dog while we were watching some dumb movie on Netflix, and he told me to be quiet instead of just humoring me and looking at my ADORABLE dog. The dog is pictured above.

My high school boyfriend was singing Pitbull's "Give Me Everything Tonight," but he was saying, "give me everything to know," and I was like... those aren't the lyrics. And then he looked it up and told me that it was mean of me to correct him even though I was right.

We had an early aughts video store stand off in which we were both too stubborn to budge. We were there, miserable, for an hour and a half. We finally rented American Splendor at my insistence. I fell asleep five minutes in.

5. Shrugging Off The Rug

The silliest fight I had was with my boyfriend was about whether or not to either return a rug we bought that was four inches too long, push it up against the wall so it curves, that way we don’t block the entryway, or somewhat block the entryway and just vacuum more. We had never shouted when arguing before. This was the first time. We ended up laughing in the middle of this fight saying to each other, “it’s better to be happy then right,” and then got back to yelling about it. We went with option three.

When my ex and I were driving across the country, we fought because it was too windy out. It was his fault.

Before we got married we thought it’d be a GREAT idea to play "Love Me Do" and "Just Like Heaven" — him on Guitar and me on drums. When we practiced in a music studio, he would berate how I kept time and I was super pissed off because he kept saying my best was off. I wanted to murder him until after we actually played the song at our wedding, and we liked each other again and realized we might have had some nerves.

My husband and I got in a fight because I broke my toe falling in a stream and he didn't believe me and wasn't sympathetic. Then, the next week HE broke his toe falling from a curb and got mad that I wasn't being sympathetic and I LOST it.

We fought about whether I was responsible for him hitting the curb when he was driving because I was slow at giving directions.

Fighting is totally normal in relationships, and if you've fought with a partner before, you're not alone. Everyone experiences different emotions, and there's nothing wrong with being upset about something that might not upset someone else. Sometimes, though, when we go back and look at old fights, we realize we're allowed to laugh. Can you imagine how boring life would be otherwise?