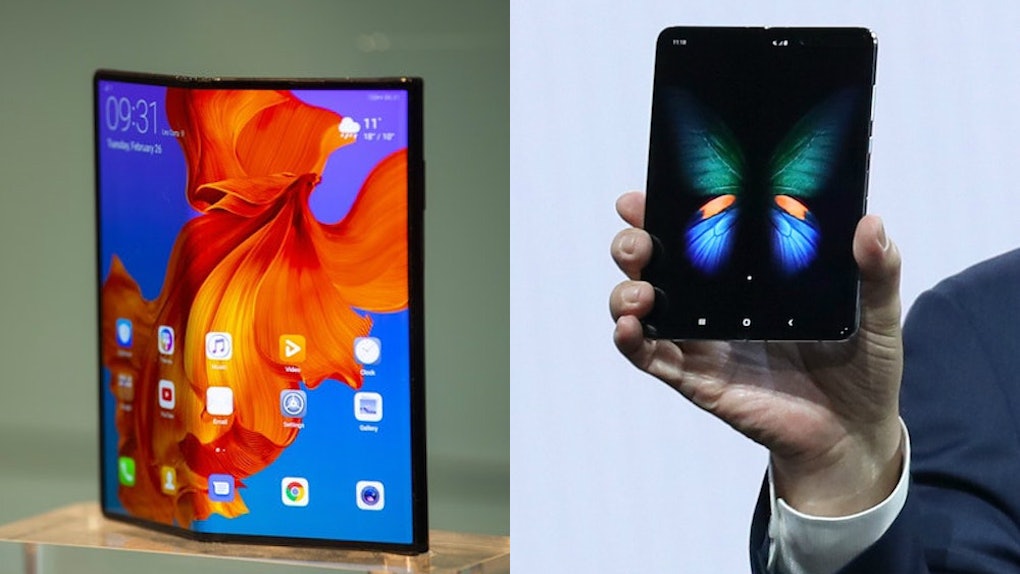 Whenever I'm forced to make a major purchase, I try to look at a wide variety of brands to evaluate all my options before ultimately making a decision. When it comes to the realm of smart phones, I usually browse Samsung or Apple's latest models, but recently, multinational Chinese phone company called Huawei revealed a new foldable phone called the Huawei Mate X that looks relatively comparable to Samsung's new Galaxy Fold. So, if you're wondering about the differences between the Samsung Galaxy Fold versus the Huawei Mate X, you might be surprised to see that the similarities are actually pretty striking.

While shopping for a new phone, there are a few highly important requirements you should consider. Maybe size does — in fact — matter to you, or you might be constantly on-the-go, making battery life a concern. If you're big on media, display may be a major deciding factor, or if you are all about ~aesthetic~ you could be interested in browsing a wide variety of colors. Samsung and Huawei are totally changing the game for smart phones by creating an entirely new category, though, so it's important to evaluate the two foldable models side-by-side, to make sure you're making the best decision for yourself. Take a look at the comparisons, below.

The Huawei Mate X, according to the company's website, has three display screens (wow!) including: a 6.6-inch front screen, a 6.38-inch rear screen, and when unfolded, an 8-inch tablet "FullView" screen.

But the Samsung Galaxy Fold, on the other hand, only has two screens, including a 7.3-inch Main Display and a 4.6 inch Cover Display. So if you're looking for as much screen time as possible, the Huawei Mate X might be the better option.

The battery power of the two phones is relatively comparable. According to the Huawei website, the Huawei Mate X comes with a 4500mAh battery, and it supports 55W SuperCharge technology, meaning it can charge to 85 percent capacity in a half hour.

Based on information taken from Samsung's website, on the other hand, the Galaxy Fold's battery appears to be a little smaller, at only 4380mAh. Similar to its rival, though, it's Fast Charging compatible on wired and wireless.

The Huawei Mate X has a high quality Leica camera. According to the website, it has a total of three cameras, including a wide angle lens, an ultra wide-angle lens, and a telephoto lens.

But Galaxy Fold's camera is pretty solid as well. According to Samsung, it also has three different cameras with six lenses. That's right — there are three in the back, two on the inside, and one on the cover. It even lets you use other apps during a video call. If photography is a hobby of yours, either of these are definitely something to consider.

There's not really much to compare here, because both the Galaxy Fold and Mate X use the Android 9 operating system, per the descriptions of the phones on their respective websites.

If you're interested in Samsung's new Galaxy Buds earphones, thought, you'll be happy to know they work with Android 5 or later, so you can likely pair them with either phone.

Storage is especially important to consider if you use your phone for work, or if you're holding big files like music, or media. According to T3, the Huawei Mate X comes with 8 GB of RAM as well as a 512 GB storage drive, making way for a lot of storage space.

According to Samsung's website, however, the Galaxy Fold comes with 2 GB of RAM storage, along with 512 GB internal storage. Not too shabby.

Don't worry about making that major decision right now — Samsung's Galaxy Fold isn't set to be released until the second quarter of 2019, according to a press release, and Huawei's Mate X isn't launching until summer 2019. Doing your research is extremely important, and you definitely have a few things to think about before picking up one of these new foldable smartphones.