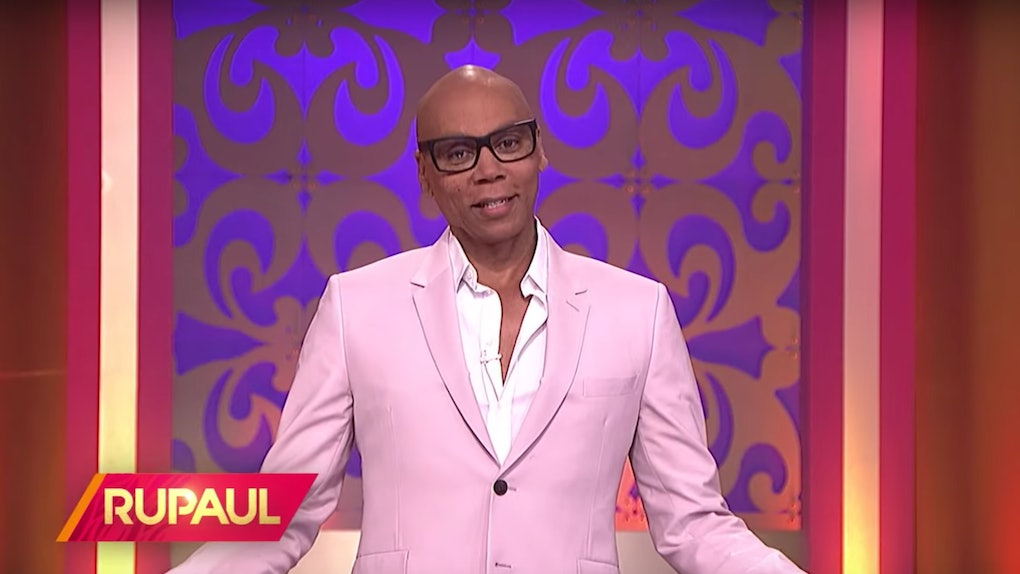 RuPaul is taking a break from crowning America's next drag superstar on his hit reality show RuPaul's Drag Race to spread some love directly to viewers with his brand new daytime talk show. The superstar drag queen just premiered his own talk show on Fox-affiliated local stations, but don't worry if you cannot find it airing in your location, because the show's YouTube channel is posting full episodes online that fans can watch for free. That's right — the premiere of RuPaul's talk show is on YouTube for free, so you can watch it right now.

The new show RuPaul officially premiered on Monday, June 10, but if you missed the debut episode then you can stream the entire episode on YouTube. The RuPaul YouTube page uploaded the full 43-minute series premiere on the night that the new talk show first aired, and judging from a response from the show's Twitter account, it sounds like the rest of the talk show's full episodes may also be uploaded to YouTube after airing on television.

In the premiere episode of RuPaul, RuPaul lays out the mission statement for his talk show, saying that he wants viewers to get to know him out of drag and to share the hard-earned wisdom that he has gained in life. Then, RuPaul sits down for an interview with his first guest, James Corden, followed by a chat with Property Brothers stars Drew and Jonathan Scott. The talk show also includes RuPaul's besties Michelle Visage and Ross Mathews, who join him to answer a fan question about karaoke. You can watch the full premiere episode below:

The RuPaul talk show is currently only on a three-week trial run as the network tests it out to see if it will pick up the show for possible syndication in the fall. At the top of the premiere, RuPaul makes it clear that the team behind the talk show is depending on fan support in order to influence Fox to order the show to series. RuPaul is only set to air 15 episodes in its trial run — a new episode each weekday until the end of June — so fans who are enjoying the show should let the studio know and hopefully it will get a full series order this fall.

As fans of RuPaul probably already know, RuPaul is not the legendary drag queen's first time hosting a talk show. Back in the late '90s, RuPaul hosted The RuPaul Show on VH1 with his frequent collaborator Michelle Visage. The variety and talk show ran for 100 episodes from 1996 to 1998, further establishing RuPaul as a household name. A decade later, RuPaul launched RuPaul's Drag Race on Logo in 2009, which has since expanded exponentially by moving to VH1, implementing four All Stars seasons, and preparing to launch its British counterpart Drag Race UK.