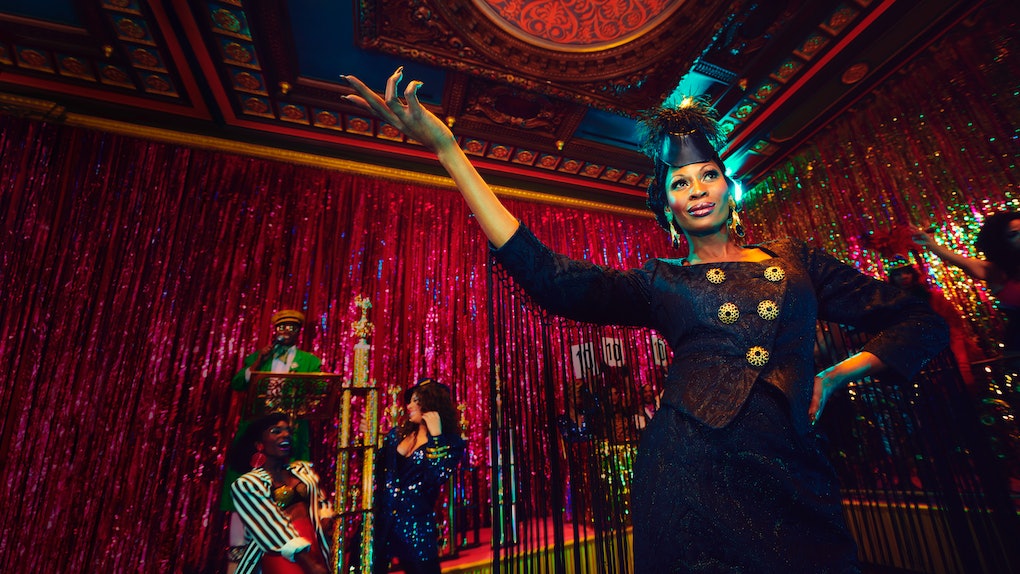 The 'Pose' Cast Is Filled With Familiar Faces, Here's What You Know Know Them From

FX's Pose made history when it was originally announced back in October, boasting it had assembled "the largest cast of transgender actors in series regular roles ever for a scripted series." Many of these actors, the press release said were relatively unknown because of the lack of opportunities for LGBTQ actors and specifically TQPOC. The core transgender cast, which was made up of five actors altogether, had been assembled after a six-month nationwide search. But does that mean when viewers tune in, they will not recognize anyone in the Pose cast?

Some of the faces are brand new, it's true, but most of the cast have some sort of on screen resume. Only three have no credits to their name prior to Pose, but two of those are fashion models. Others are Broadway or Off-Broadway actors who have done a few guest slots on TV before and this is their first big small-screen commitment. So if you're a musical theater lover, you may recognize some of these actors.

For Murphy, this is a dream come true:

I'm so proud that Pose and FX has made history right from the beginning by featuring the most trans series regular actors ever in an American television production. Additionally, the first season Pose will feature 50-plus LGBTQ characters – a record in American television history.

Let's run down the main cast members of the series.

Mj Rodriguez is relatively new to TV, but she has an extensive line of Off-Broadway credits including a run in 2011's Rent revival in the role as Angel. Before landing Pose she also had guest turns in Nurse Jackie and Luke Cage.

He character, Blanca, is the house mother of the House of Evangelista, which she founds after leaving the House of Abundance.

Ryan Jamaal Swain is the biggest newcomer of the cast. This is his first major acting credit on screen or on stage.

His character, Damon, has just moved to New York City after being rejected by his family for being gay and winds up joining the House of Evangelista.

The biggest name in the main cast is Billy Porter. He is a Tony-Award winning actor for his performance in Kinky Boots as Lola, a character he originated on Broadway. His on-stage credit highlights include being part of the original casts of 2001's Dreamgirls and 2016's Shuffle Along.

His character, Pray Tell, is the father figure to the boys of the House of Evangelista, as well as a fashion designer for those who walk the dance floor runway along with being the ball's main MC.

Moore is a model and an actual real-life ball culture artist who is a member of one of the most famous houses to come out of the 80s era: The House of Xtravaganza. The show Pose is her first major on-screen role.

Her character, Angel, starts out in the House of Abundance but then joins the House of Evangelista. She's a transgender sex worker who finds a patron in Evan Peter's character Stan.

Dominique Jackson is another transgender fashion model, for whom this is her big break. The show Pose is her first major on-screen role.

Her character is Elektra Abundance, the cruel and petty mother of the House of Abundance. Her house is the main rival to the House of Evangelista.

Hailie Sahar's break into acting came in a guest star turn on Transparent. She also has a two-episode arc on USA's Mr. Robot before landing a role in Pose.

Her character, Lulu Abundance is one of the sycophants who praise mother Elektra in an over the top manner while secretly hating her guts.

Angelica Ross has the longest resume of anyone in her house. Her breakthrough came in the Emmy-nominated short-form series Her Story, and she had a three-episode arc in Claws last season, as well as a guest star turn on Transparent. She's also a businesswoman and the founder of Trans Tech Social Enterprises.

Her character, Candy Abundance, is Elektra's other sycophant.

Evan Peters is one of Ryan Murphy's go-to actors and stars in Murphy's other major show, American Horror Story. He also starred as Quicksilver in both X-Men: Days of Future Past and X-Men: Apocalypse.

Peters' character Stan Bowes is an up and coming businessman on Park Avenue, working at Trump Tower, with a wife and family back home in New Jersey.

Another one of Murphy's favorites, she starred alongside Peters in American Horror Story: Murder House. Other TV credits include House of Cards and 24.

Mara's role is Patty Bowes, Stan's wife. She is a mother of his children and utterly clueless about his life in the city.

James Van Der Beek is famous for his role as Dawson Leery in the 1990s teen soap Dawson's Creek. He's had trouble breaking out of that pigeonhole ever since, but perhaps this will do it.

His character on Pose is the anti-Dawson. He's a coke snorting, business blustering, creepazoid "don't you know who I am" type, who functions as the show's Trump stand in as Stan's boss.

Woodard was a late addition to the cast. She's a stage and screen veteran who is also a playwright in her own right. She's been on everything from The Fresh Prince of Bel Air to Chicago Hope to ER.

Her role of Helena St. Rogers is the Dean of the New School for Dance where Damon desperately wants to go to school.

More like this
Netflix's 'Shadow And Bone' Virtual Experience Is Full Of Grishaverse Gems
By Ani Bundel
Will There Be A 'Cruel Summer' Season 2? Here's What We Know
By Rachel Varina
What Comes In The 'Euphoria' Book Box Set? Here's What To Expect
By Abby Monteil
Stay up to date