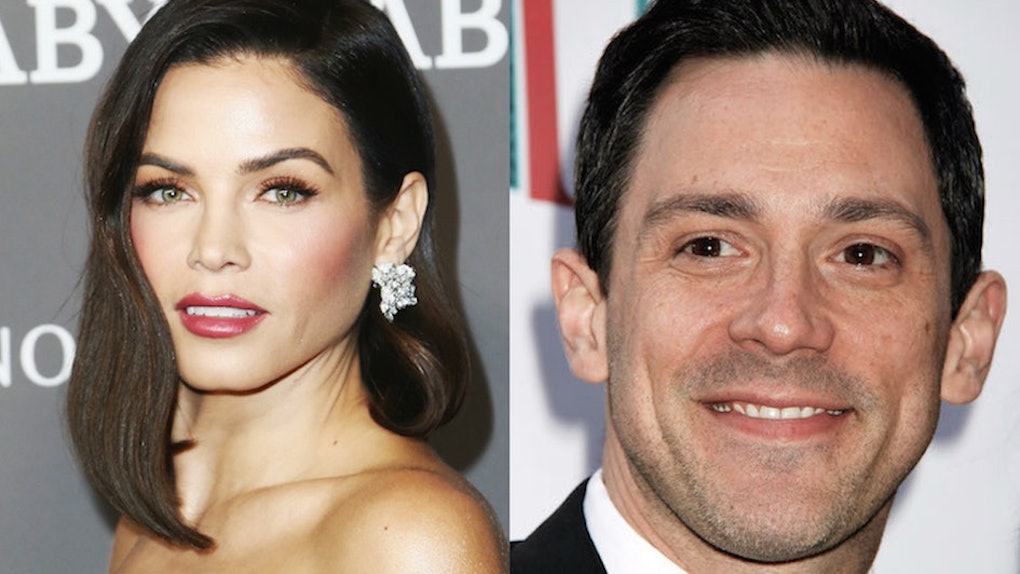 Jenna Dewan has reportedly been dating Tony-winner Steve Kazee for a couple of months now and, lately, things seem to be really ramping up. Kazee posted a vintage photo-booth strip of the two of them together for Dewan's birthday on Dec. 3., and he even left a flirty comment on one of her Instagram posts. Now, however, it's the World Of Dance star who's showing the Shameless actor some major love. And the photos of Jenna Dewan and at Steve Kazee's "Love Actually Live" premiere may just prove that love, actually, is all around for these two.

Kazee takes on the part of Jamie Bennet in the show, a role originally played in the 2003 film by Colin Firth. Jamie, in case you forgot, is the English dude who hauls up in a romantic little house in Portugal to write a book after he finds his girlfriend in bed with his brother. Then he falls in love with the maid he hired while there, even though she speaks Portuguese and he only speaks English and neither one of them knows what the other is saying.

If you still don't remember, maybe this will help jog your memory:

Anyway, Dewan attended the "Love Actually Live" opening night on Dec. 12 at the Wallis Annenberg Center for the Performing Arts in Beverly Hills. And not only did she reportedly sit right near the front to watch Kazee inhabit the character, she may have even teared up during his performance, according to Entertainment Tonight.

A source told ET that Dewan was seen smiling and applauding from her seat. And then at the very end of the curtain call, Kazee even blew her a kiss. And apparently it didn't stop there. Because according to the same source Kazee came into the room at the after party and approached Dewan from behind, then the two of them hugged and kissed on the lips, after which Dewan wiped some of her lipstick off Kazee's face. Awwww! He also reportedly hugged Dewan’s mom, too, so it looks like the relationship has officially entered the "meet the parents" territory!

News of Dewan and Kazee’s relationship first started surfacing right around Halloween, just weeks after her ex-husband Channing Tatum was linked with singer Jesse J, and six months after Dewan and Tatum announced the end of their eight-year marriage by posting the following joint statement on Instagram:

We have lovingly chosen to separate as a couple. We fell deeply in love so many years ago and have had a magical journey together. Absolutely nothing has changed about how much we love one another, but love is a beautiful adventure that is taking us on different paths for now. There are no secrets nor salacious events at the root of our decision — just two best-friends realizing it’s time to take some space and help each other live the most joyous, fulfilled lives as possible. We are still a family and will always be loving dedicated parents to Everly.

While the little pang of hearbreak over the fact that Dewan and Tatum have ended their marriage will never go away, it's still so great to see Jenna Dewan and Steve Kazee are so happy ans in love (actually).

More like this
Is Jackson Wang In Marvel's 'Shang-Chi' Trailer? Fans Are Convinced They Hear Him
By Michele Mendez
Demi Lovato Called Out A Froyo Shop For Promoting Dieting Culture, & It's Getting Mixed Reactions
By Brandy Robidoux
These BTS x McDonald's Meal Memes Will Crack ARMYs Up
By Michele Mendez
Stay up to date