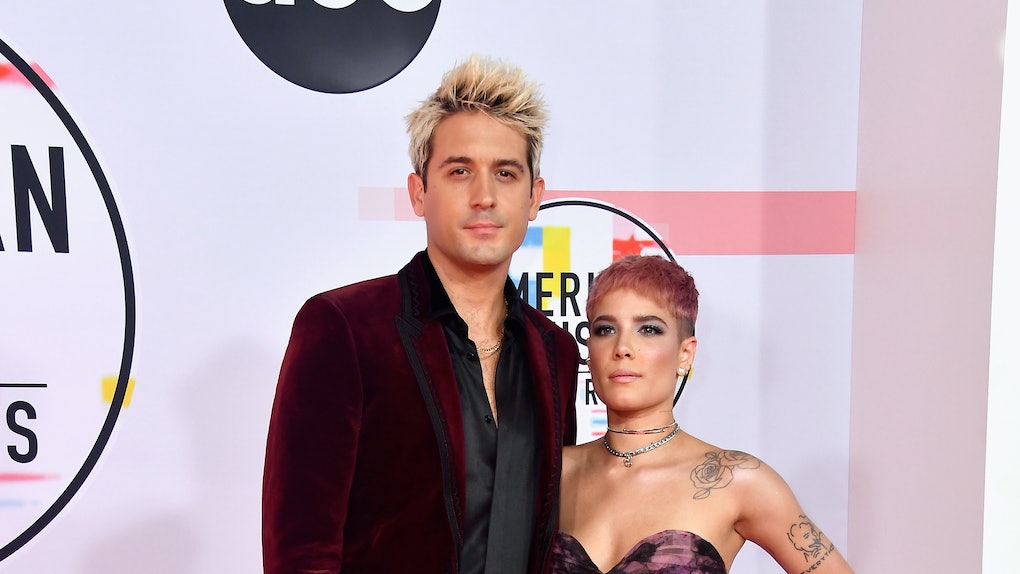 Halsey and G-Eazy are back together! And they're showing all their love for each other at the 2018 American Music Awards. Actually, the photos of Halsey and G-Eazy on the 2018 AMAs red carpet are so sweet, you'll fall in love with them yourself! The couple's joint appearance on the AMAs red carpet is their very first since rekindling their romance. And they definitely look like they're super happy to be together once again.

Halsey and G-Eazy took a brief break from their relationship in early July. The news came from Halsey herself via Instagram in a heartfelt message that explained the situation:

"I normally keep this kind of thing private but provided our public nature I feel I need to inform my fans," Halsey wrote. "G-Eazy and I are taking some apart. I'm eager to continue the upcoming passage of time dedicating myself to my art and career, and the duration of my tour. I wish him the best."

At the time, Halsey and G-Eazy had been together for just about a year. But their break from each other was relatively short-lived. As early as August, the two were spotted holding hands after the MTV Video Music Awards. Then, in late September, G-Eazy further sparked rumors of a reconciliation with a sweet birthday message on Instagram for Halsey's birthday.

“Happy birthday to this one. I love you so so so much and I always will,” he wrote. “I myself, along with millions and millions of other people appreciate you more than you’ll ever know. You’re the brightest star in the sky. So grateful to get to travel thru life with you, so happy to call you my queen. Happy birthday baby.”

Here's a look at what he posted on Instagram for Halsey's birthday:

And now, in October, they've put all the rumors and speculation to rest by walking the red carpet together. They didn't hold back their affection for one another, either. Halsey and G-Eazy have clearly reconciled and they're not shy about showing it.

Here's a look at the happy couple on the AMAs red carpet:

These two are so obviously in love with each other and they definitely look proud to be escorting one another down the red carpet. Now, if their brief split and fast reconciliation doesn't make you believe in love, then I don't know what will. I mean, look how sweet and happy they look!

Halsey and G-Eazy may not be up for any awards at the AMAs this year, but they could definitely be in the running for Cutest Couple on the Red Carpet, if that were a thing. If it were, I think they'd probably be tied with Cardi B and Offset, who are also super cute together.

All in all, it's really sweet to see G-Eazy and Halsey back together and looking so content. It's always sad when a couple breaks up, but these two seem so committed to make what they have work. It looks like love does conquer all for some couples!