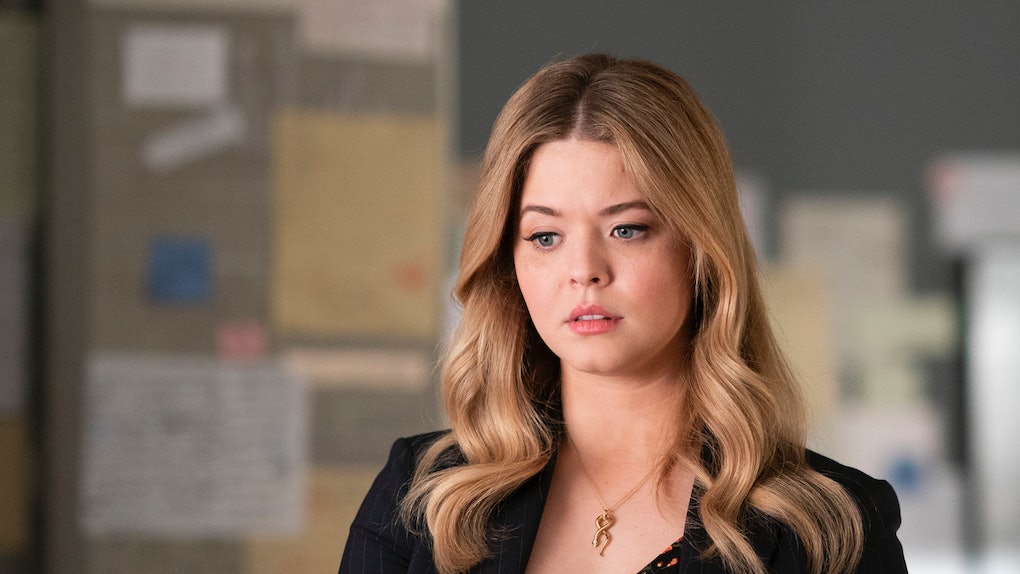 On Pretty Little Liars: The Perfectionists, the truth about Taylor Hotchkiss' life is about to spill over. Believed to have killed herself a year before, Taylor is actually alive and was helping Nolan learn about their mother's intentions in increasing surveillance on Nolan and his posse. Now that Alison has begun to suspect that Taylor's death isn't what it seems, the Perfectionists Season 1 Episode 4 promo teases blasts from the past that may lead her to the truth.

In April 3's "...If One of Them Is Dead," Alison (Sasha Pieterse) and the kids learned about Nolan's (Chris Mason) cabin, where Taylor (Hayley Erin) met with him the night he was killed. This time, the group didn't find anyone on the property, but a dying yellow rose inside the house intrigued Alison. She took it home, and while skimming through a feed of photos from Nolan's funeral, she realized that the same kind of flower decorated Taylor's gravestone. As Alison then shared with Mona (Janel Parrish), the coincidence was enough for her to believe that something wrong was happening in Beacon Heights and that Taylor might be alive.

In the promo for April 10's "The Ghost Sonata," snippets related to Nolan's mysterious sister continue to pop up. Ava (Sofia Carson) and Dylan (Eli Brown) appear to find an old copy of Ozma of Oz, a later addition to The Wonderful Wizard of Oz book series, that belonged to Taylor. Taylor crossed out the names of countries in the book's map of Oz, replacing them with "Hotchkiss Land" and "McDevitts." After Alison muses about whether Taylor ever found the Emerald City, she seemingly visits the cabin again, picking up another Oz book as something causes her to spin around and look behind her.

The L. Frank Baum character Ozma first appeared in The Marvelous Land of Oz as an orphan boy before she revealed her true identity as the last of the Ozian royal family. If you brush off your analyzing skills from English class, you could definitely say that Taylor posing as a dead girl while actually being the last Hotchkiss sibling parallels Ozma's scenario. After all, Ali is overseeing a literature class at Beacon Heights University — is Taylor purposely leaving literary clues for her to crack?

Meanwhile, Ava receives a gift reminiscent of her felon father, who's been MIA. The music box that arrives makes her wonder if her dad is "back." Plus, Mona and Alison wait for the outcome of an ambiguous report Mona's own program is conducting, and Alison and Caitlin's (Sydney Park) names are added to the results. However, the women are baffled when someone named Ray Hogadorn also appears onscreen. Is he connected to Nolan's death or the Hotchkisses in general?

The Perfectionists' key mysteries are beginning to form, and the episode's network synopsis teases that the students and Alison may uncover an important facet of the case soon. Freeform's summary reads:

Alison hunts for Taylor, thinking she may be alive and in hiding. Caitlin, Ava and Dylan realize their newfound true friendship is threatened by still buried secrets and debate coming clean to each other. And the Perfectionists try to tighten a noose around their number one suspect.

We'll have to wait and see if this trip down the yellow brick road finally leads the Perfectionists to Taylor. Season 1 of Pretty Little Liars: The Perfectionists continues on Wednesday, April 10 at 8 p.m. ET on Freeform.