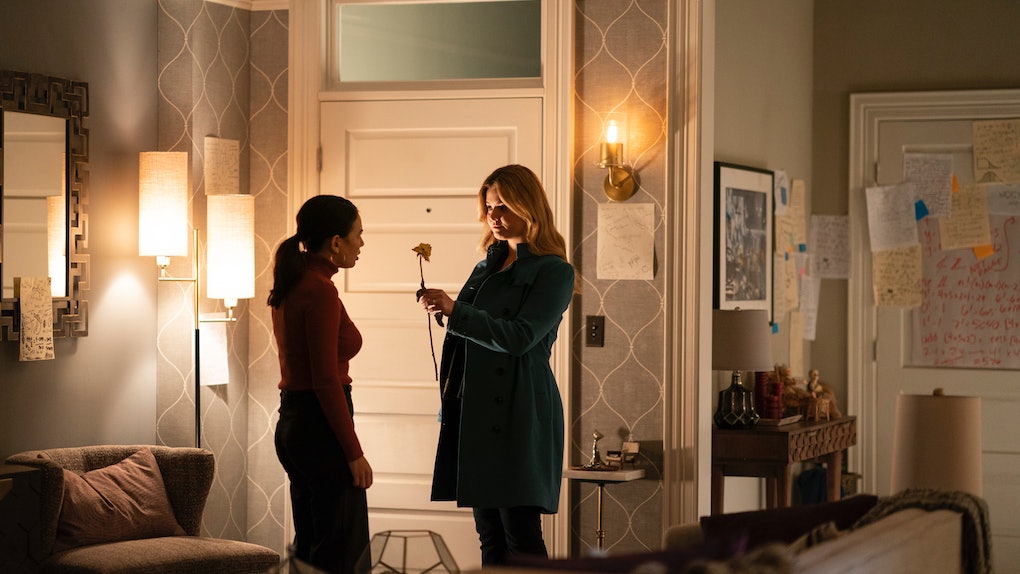 What’s The Significance Of The Yellow Rose In 'The Perfectionists'? It's A Major Clue

This post contains spoilers for Pretty Little Liars: The Perfectionists. Nolan Hotchkiss's power might have seemed impossible to defeat, but on The Perfectionists, his posing posse, as well as Alison, are on their way to cracking some of the murdered student's secrets. The group explored Nolan's cabin in the woods on April 3's episode, and while they didn't discover anyone on the property, Alison found a clue that has her thinking about her mysterious doppelganger. What's the significance of the yellow rose on The Perfectionists? The flower from the cabin has given Alison a hunch about Taylor Hotchkiss.

Following Nolan's (Chris Mason) funeral, Alison (Sasha Pieterse) has seemingly made peace with her physical resemblance to his sister Taylor (Hayley Erin), who killed herself a year before when the stress of teaching at Beacon Heights University caused her to snap. However, viewers know that Taylor is actually alive and living in a cabin in the woods. She was plotting with her brother against the surveillance efforts of their mother Claire (Kelly Rutherford) before someone Nolan confided in killed him. But other than wondering about the physical similarities between herself and Taylor, Alison is still unaware about the truth.

When an investigation into Nolan's life led to her discovery of the cabin in the April 3 episode "...If One of Them Is Dead," Alison was captivated by a dying yellow rose inside the house. While Dylan (Eli Brown) only shared his gum wrapper clue with Ava (Sofia Carson) and Caitlin (Sydney Park), Alison took the flower home with her. Then while skimming through a feed of pictures from Nolan's funeral, Alison noticed that the same yellow flower was hanging in front of Taylor Hotchkiss's gravestone.

Clearly used to there being no such thing as coincidences, Alison visited Mona (Janel Parrish), telling her she suspected Beacon Heights was home to something worse than they ever thought was possible. "I think Taylor Hotchkiss might be alive," she told her.

It was really only a matter of time until someone realized this, but Alison catching on because of the flower is noteworthy. Was the flower in the cabin by coincidence or is Taylor trying to ensure Alison finds her? As seen in last week's "Sex, Lies and Alibis," Nolan supposedly texted Alison before his death, wanting to meet her on the roof of Thorne Hall. Alison only received the message days later, but when the hidden figure of Nolan's killer did meet him on the roof, he revealed that Taylor was alive and that they needed help.

If Nolan's text was legitimate, he and Taylor must have wanted Alison to know the truth. With Nolan out of the picture, perhaps Taylor has taken over the quest to grab Alison's attention. The Rosewood native is definitely close to learning the Hotchkisses' truth, but with Nolan's trio trying to trust each other and Mason (Noah Gray-Cabey) now a possible threat, will someone beat her to it? We have to wait and see.

Season 1 of Pretty Little Liars: The Perfectionists continues on Wednesday, April 10, at 8 p.m. ET on Freeform.