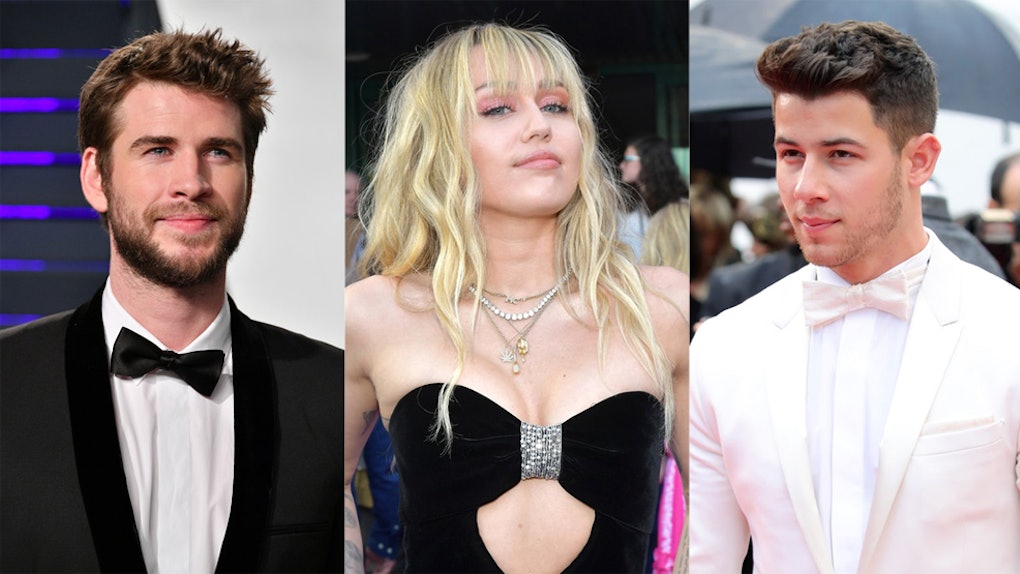 The Partner Miley Cyrus Is Most Astrologically Compatible With Is Surprising

Chances are you've heard that Nick Jonas gave fans a peek at his former relationship with Miley Cyrus by way of the Chasing Happiness documentary, about the Jonas Brothers preparing for a new album together after a six-year break. In the documentary, Jonas shared that one of the things that helped him bond with his brothers was falling in love for the first time, with none other than Cyrus. While both Cyrus and Jonas are now happily married to other people, the admission made me wonder what could have been. Specifically, which partner Miley Cyrus is most astrologically compatible with. Her hubby Liam Hemsworth, or her ex Jonas? The answer actually kind of took me by surprise.

But first, a little refresher on the whole Cyrus-Jonas love story. The two first met in 2006 when they were 13 years old, and dated for about a year. In the documentary, Kevin Jonas remembered the impact that first love had on his brother. "We got to be on the Hannah Montana episode on the Disney Channel. That changed girls for Nick forever," Kevin recalled. "When he met Miley, I think that kid’s head exploded."

Jonas cites his relationship with Cyrus as helping to bring him closer to his brothers. "I started writing about love and I actually knew what it felt like," he explained. "For the first time, I was asking them questions that only a younger brother can ask their older brothers." It also inspired him creatively, with Cyrus being the muse for both the songs "Love Bug," and later "Wedding Bells," when she got engaged to Hemsworth the first time.

While Cyrus has gone on to marry Hemsworth and Nick walked down the aisle (multiple times) with Priyanka Chopra, it's still interesting to consider what could have been if things had worked out differently. Who is considered Cyrus' most "astrologically compatible" match, according to the stars? Cyrus was born November 23, under the sign of Sagittarius, and Hemsworth's birthday is January 13, making him a Capricorn. Finally, Jonas's birthday, September 16, makes him a Virgo.

Cyrus and Hemsworth have had a pretty epic relationship. They were engaged once before only to call it off, then reunite and marry years later. They were fated to be together, despite their differences, and if you take into account their astrological compatibility, their story begins to make a lot of sense.

For one thing, Sagittarians and Capricorns (Cyrus and Hemsworth's signs, respectively) have diametrically different attitudes about life. Sag is a free spirit who is happy to go with the flow and let life wash over them, while soaking in every bit of excitement and adventure that comes their way. Capricorns, on the other hand, are extremely practical and disciplined, and have a clear plan of what they want life to hold for them, and how they will achieve it. As you can imagine, this can create a lot of friction between the two signs, but it doesn't necessarily mean a relationship between them is doomed. In fact, if they are motivated enough, they can actually pull each other to the center and create a healthy equilibrium — but it will take work and dedication, so there has to be a lot of love between them.

It's a bit easier for Sagittarius and Virgo (Cyrus and Jonas' signs, respectively), but since Virgo and Capricorn are such similar signs, some of the same problems may arise between them. However, they have more middle ground to work from, right from the start. They are both very independent signs who know their own minds. They can both be very blunt in their communication styles and can actually handle the other's constructive criticism well. They struggle when it comes to worldview, where Sagittarius just wants to play and have fun and Virgo thinks structure and work should take priority. While these two definitely will find each other fascinating and stimulating, they will also have to do some work to bridge the gaps long-term.

Astrologically speaking, the partner Cyrus is the most compatible with is technically Jonas. But compatibility is not destiny, and the most important factor is always love. No pairing — even the most compatible — has a chance without it, and even in pairings with the least compatibility, love is the foundation on which couples can compromise, and thus make the relationship work in the long run. Cyrus picked the right partner for her in the end, but I definitely wouldn't say no to a Cyrus-Jonas breakup ballad. Can you imagine?!