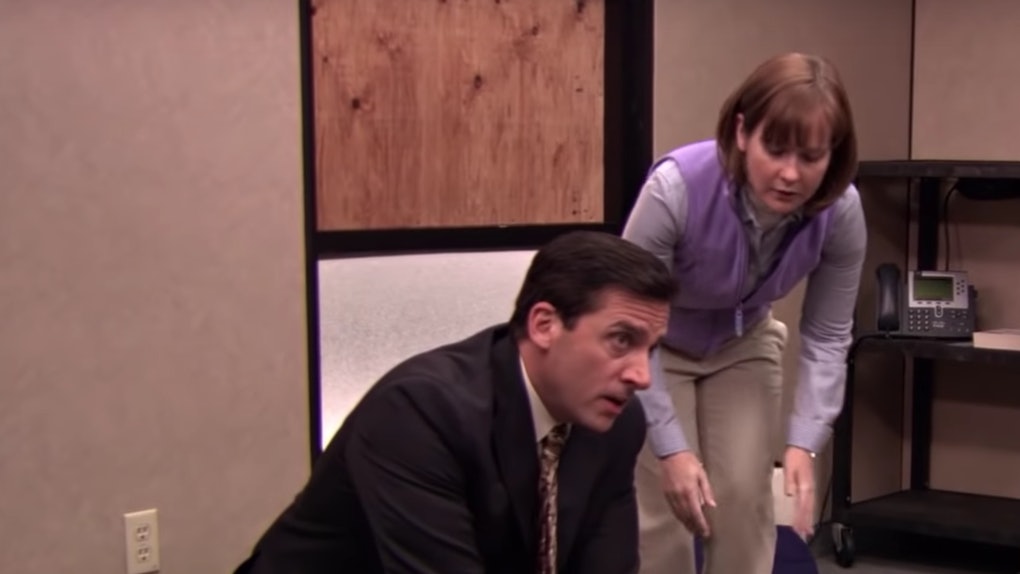 'The Office's' CPR Lesson Helped Save Someone's Life, So Thank You, Michael Scott

Whoever said TV can't teach you anything is going to have to eat their words, since a life was officially saved recently thanks to the ol' idiot box. After watching The Office's CPR lesson, a man in Arizona saved the life of an unconscious woman, even though he had no experience performing CPR before. Steve Carell's bumbling boss character Michael Scott is not known for getting things right (remember the time he completely botched Secret Santa?) so the fact that he's responsible for saving a life is truly huge. Although, truth be told, Michael actually has trouble following the correct directions in the CPR training episode. But, something about the correct safety practices stuck for 21-year-old Cross Scott, who, by the way, has no relation to Michael Scott (that we know of).

Scott works in Tuscon, AR as an auto shop technician, and on Jan. 11, he was test driving a customer's car when he noticed a white sedan stopped on the side of the road. According to the Arizona Daily Star, he thought that the driver was having car trouble and he could help, so he pulled to the side of the road. He was surprised to find an unconscious woman slumped over in the driver's seat. Scott knocked on the window to try to wake her up, but when she didn't respond he broke the window and pulled her out. He realized she needed to be resuscitated with CPR, but his only experience with the life-saving technique was what he'd seen on The Office.

Scott told the Arizona Daily Star, "I’ve never prepared myself for CPR in my life. I had no idea what I was doing.” But despite that lack of preparation, Scott did remember the Bee Gees song "Stayin' Alive."

In the famous scene from Season 5, Episode 14 of The Office, the CPR teacher tells Michael and the rest of the Dunder-Mifflin team that they can always remember to administer chest compressions to the beat of "Stayin' Alive." After some brief confusion when Michael instead starts singing Gloria Gaynor's similarly titled song "I Will Survive," Michael leads the team in a full-blown sing-along of the disco hit. It's a perfect example of some typical Office hilarity, and also of some medically-sound advice. By following the beat of the song, you end up pumping the heart at about 100 beats per minute, which is exactly what is needed to save a life.

After about one minute of Scott administering CPR, the woman began breathing again. Ten minutes later, the paramedics arrived and rushed her to a nearby hospital. Later that day, after Scott's shift ended, he went to the hospital to check on her, but she'd already been released with a clean bill of health. According to the Arizona Daily Star, the paradmedics told Scott if he hadn't performed CPR, the situation might not have ended so happily. So it sounds like Scott's Office-inspired life-saving skills made all the difference.

While The Office provides an excellent example of correct CPR technique, it might not be prudent to turn to the series for all of your medical advice. Otherwise you might end up with a plastic-wrapped foot with grill marks on it, like Michael.