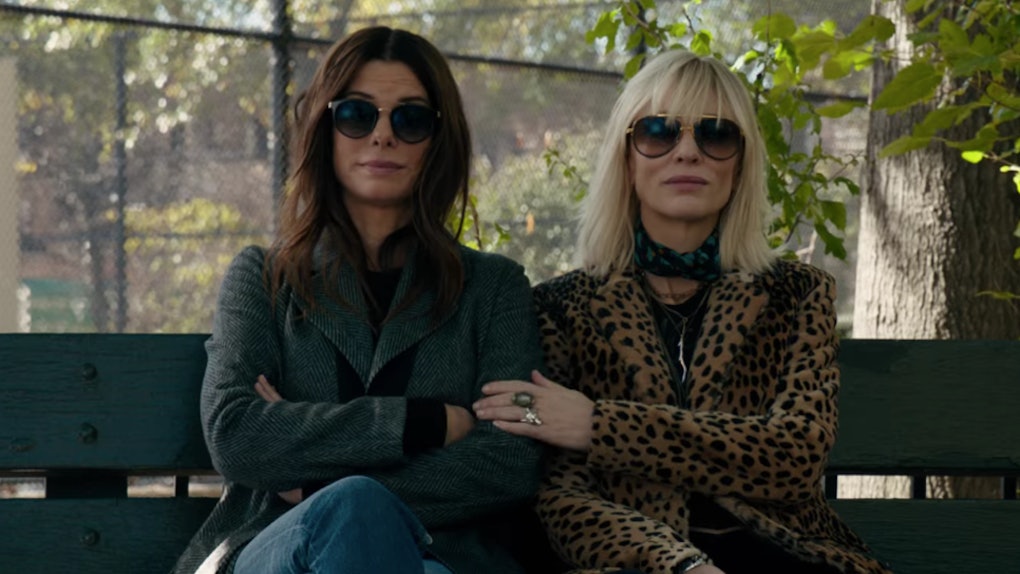 OK ladies, it has happened. The Ocean's 8 trailer is here. Everyone remain calm, try not to panic, but it's just about the most amazing trailer I've ever seen in my life. The Sandra Bullock and Cate Blanchett-led Ocean's 8 is shaping up to be one of 2018's most highly anticipated reboots. And the best part about it is we learn the location of the heist they'll be plotting: the Met Gala. Yup, the film's creators cast Rihanna in a movie about robbing the freaking Met Gala. That is some kind of poetry.

We already knew this perfectly cast group of ladies would be robbing the Met Gala, but what we found out with this full trailer is they're actually robbing a woman who's attending the Met Gala wearing a $150 billion necklace. That woman is played by Anne Hathaway, and there's some kind of Devil Wears Prada poetry to be found in that as well. The trailer starts off with Sandra Bullock as Debbie Ocean sitting in a prison talking about how she violated her parole (classic). She talks (read: lies) about wanting to lead an average life free of crime if/when she gets out of prison, so naturally, per the plot of the original Ocean's movie, she plans a massive heist right after getting out. I love it all very dearly.

Fans are living for the trailer, which shows all of women being recruited for Ocean's heist with the help of her literal partner in crime, Lou (Blanchett). Someone please catch me 'cause I'm going to faint if I watch this one more time.

I would like to thank not only God, but also Jesus for making Ocean's 8 happen.

While Ocean's 8 is technically a reboot, the filmmakers decided to make it even more connected to the original Ocean's 11 by making Debbie Ocean (Bullock) the estranged sister of Danny Ocean (George Clooney). So clearly, being very skilled robbers runs in the Ocean family. If you're hoping to see a cameo from George Clooney in Ocean's 8, don't hold your breath.

The teaser trailer shut down that possibility real quick by including a shot of Debbie Ocean sipping a martini in front of Danny Ocean's grave. Iconic.

His grave also says he died in 2018, so maybe it was her brother's death that prompted her to plan this heist? We'll have to wait until June 2018 to find out.

The other most iconic part of the Ocean's 8 trailer is all of Cate Blanchett's looks.

The rest of the all-star cast consists of Sarah Paulson as Tammy, Mindy Kaling as Amita, Helena Bonham Carter as Rose, and Awkwafina as Constance. Anne Hathaway's character is a woman named Daphne Kluger, and from what I can tell, it seems like she might actually join the heist at one point...? I don't know. The plot still isn't 100 percent clear, but I don't need to know anything more than the fact that it's female-led to be 100 percent in. Oh, almost forgot to mention, "These Boots Are Made For Walkin'" is the song used throughout the entire trailer. They know what they're doing to us, guys. They know we've been waiting. They know we're ready. BRING ME OCEAN'S 8!

If you care about the other celebrity cameos in the trailer (literally why?), I guess it's worth noting James Corden makes an appearance. Matt Damon is also apparently in it, but whatever. That's not what matters here, friends! What matters is in less than a year, we are going to see the film version of what Rihanna does at the Met Gala every year. She robs it. She slays it. And her fearless leaders this time are Sandra Freaking Bullock and Cate Freaking Blanchett (whose characters may or may not be dating).

Me and my friends impatiently waiting for June 2018 to arrive like...