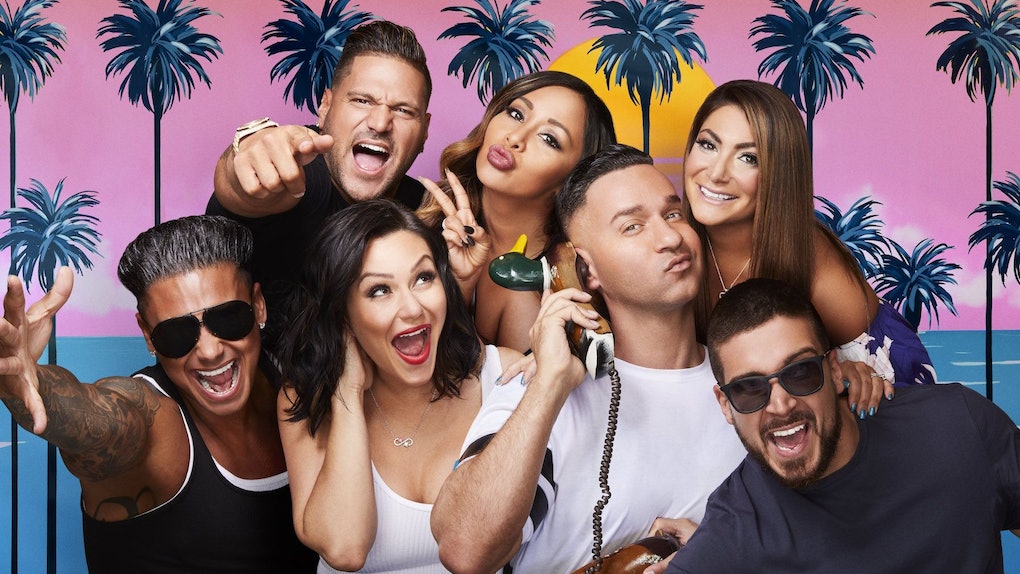 What is summer without time spent with your besties from the shore? Seven months after the spinoff series last aired new episodes, Jersey Shore Family Vacation is returning with insight into some of the cast's most dramatic experiences, and thanks to new footage from MTV, fans can honestly say that they're in for an epic run of Jersey Shore shenanigans. The new trailer for Jersey Shore Family Vacation reveals more than you could ever imagine, so get ready for Jerzday Thursdays to become a highlight of your week.

Following its Season 3 renewal in December 2018, Jersey Shore Family Vacation returns with more episodes on Thursday, July 11, and if you've kept up the guidos and guidettes on social media, you know that the past few months have been quite the ride for them. Mike "The Situation" Sorrentino was sentenced to eight months in federal prison for tax evasion soon before marrying longtime love Lauren Pesce, while Jenni "JWoww" Farley filed for divorce from husband Roger Mathews. Nicole "Snooki" Polizzi and Deena Cortese both welcomed new babies, and Vinny Guadagnino and Pauly DelVecchio starred together in reality competition series Double Shot at Love. In what may as well be a Family Vacation recurring feature, Ronnie Ortiz-Magro also continued to publicly clash and then make up with girlfriend Jen Harley.

All of these events went down during the show's hiatus period, but as the new Jersey Shore Family Vacation trailer confirms, MTV cameras were there to capture all of the cast's excitement and heartbreak.

The trailer focuses primarily on the Situation's wedding preparations and courthouse trial, emphasizing the cast's commitment to supporting Sorrentino during his major life changes. "Whatever the outcome may be, we're here for you throughout that whole process," DelVecchio says to Sorrentino in the clip.

The footage also teases a road trip destination involving cowboy hats, wedding day cheers, and the group emotionally reacting to Sorrentino's day in court. The preview's ending also reflects on how fans have watched the cast grow up as Sorrentino tells his friends, "I am so grateful that I've had these past ten years to find friends that became family."

The roommates may be back, but a lot has changed, as the squad rallies around Mike, who’s facing prison time and planning a wedding. At the same time, Deena’s about to give birth, Jenni’s contemplating divorce, Ronnie’s fed up with all the jokes at his expense, and Pauly can’t resist just one wedding prank. Through the challenges and fears, pranks and surprise wedding guests, is the humor that keeps this group together and proves that facing life’s twists and turns is easier with friends.

As of June 2019, the Situation is still in prison after beginning his sentence in January. In May, Guadagnino told Entertainment Tonight that the cast had filmed a portion of Season 3 ahead of Sorrentino entering prison, saying, "We filmed a lot of Season 3 already because we documented Mike's wedding and him in court and leading up to [him going to jail], so Mike's gonna be a huge part of the season. And in the time since he's been away, we haven't really even been filming that much. Because we can't really do the show without Mike."

It sounds like these new episodes will deliver the usual dose of hilarity and friendship but include a twist of real-life sincerity in the wake of the cast's milestones. Remember to check "GTL" off your to-do list before the show comes back!