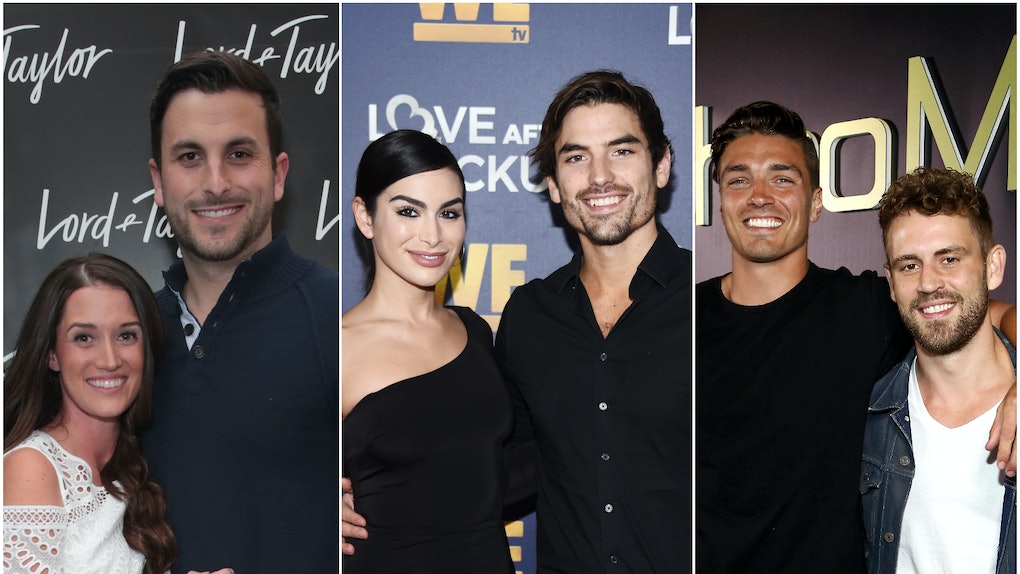 The New 'Bachelor' Spinoff Show 'Rose Buds' Premieres On May 8, Here's What You Should Know

Bachelor Nation is reaching that blissful time of the year when intense weeks of The Bachelorette speedily transition into a sun-soaked, boozy season of Bachelor in Paradise. But if you can't wait until Hannah Brown's Bachelorette reign officially kicks off on May 13, brand new Bachelor content is coming your way soon. The new Bachelor spinoff show Rose Buds premieres on May 8, so here's what we know about this look into some of our favorite contestants' post-Bachelor lives.

The announcement of some kind of TV show seemed imminent, and we now know what encouraged these former contestants to reunite on camera. PEOPLE reports that the group, along with the Tolberts' daughter Emmy and Ashley's sister Lauren, are starring in a Kinetic Content digital series called Rose Buds. The series is slated for a May 8 premiere on KineticTV's YouTube channel, following the stars as they handle life after being in the Bachelor bubble (Sooo does this mean there are no actual roses on a show titled Rose Buds?).

Speaking to PEOPLE about the series, Ashley said:

I feel like everyone loves seeing the friendships that form on the show, but we never get enough in the one hour and 20 minutes of air time. I think this is why people love seeing the alums together on Instagram. We had a blast filming Rose Buds together. It’s nice to hang out together on camera and not have the looming worry about who may get eliminated at the next rose ceremony,

Seeing as the regular Bachelor shows keep contestants in pretty isolated spaces, Rose Buds' premise of following the group around IRL is already intriguing. The web series will follow Ashley and Jared as they move in together and plan their August 2019 wedding. It will also give Jade and Tanner an opportunity to discuss their cross-country move to Los Angeles and the difficult circumstances leading up to Jade's pregnancy with their second child. Former Bachelor Nick and Bachelorette Season 13 contestant Dean will provide insight into balancing single life with growing careers.

Kinetic Content's press release about the series reads, "Rose Buds will highlight the lives of this dynamic group of friends in various stages of love, marriage, and career. It's a look at these individuals and relationships beyond the walls of the famous mansion they all met in."

Well, if the intention behind this is to make a eclectic dramedy about 30-somethings, I am on board 100 percent.

Based on production photos, it looks like we can also expect guest appearances from other Bachelor stars. One group pic released by Kinetic Content features Paradise couple Chris Randone and Krystal Nielson, and you can also spot Paradise veteran Evan Bass with his daughter, whose mother is fellow Paradise contestant Carly Waddell. The show may be missing Chris Harrison, but this is shaping up to be the most dramatic Bachelor reunion ever.

It's still unclear how many Rose Buds videos there will be, but here's to watching its updates in between Bachelorette episodes this summer.

Rose Buds premieres on Wednesday, May 8, on KineticTV. Season 15 of The Bachelorette premieres on Monday, May 13, at 8 p.m. ET on ABC.