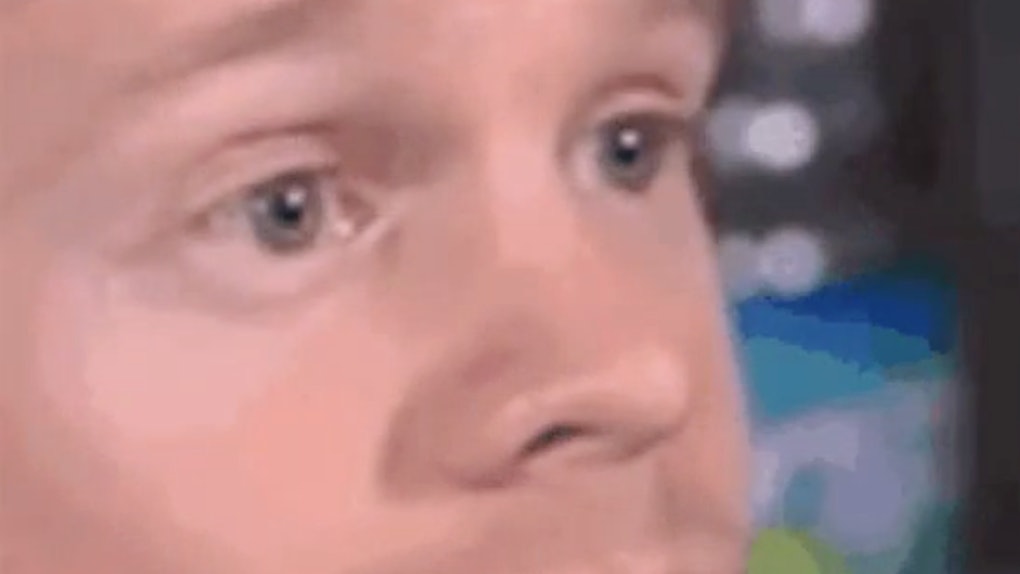 The Most Popular GIFs Of 2017 Show We're Way More Unhappy, But At Least We Can Laugh About It

It's not just you: This year was actually worse than last year, at least according to what GIFs people were sharing. The most popular GIFs of 2017 suggest that we're way more unhappy than we were last year. But hey, at least we're taking it in stride.

The most popular memes of the year were reported by Tenor, the largest GIF-sharing platform out there, responsible for the ones you see in Messenger, iMessage, Twitter, Facebook, etc. The platform, which also has an online searchable database, has a lot of data to pull from, with 300 million users and 9 billion searches every month. To run its analysis this year, Tenor basically examined all the GIFs users had been searching for and using, and compared it to what users were looking for last year, on a global scale. Tenor's head of insights, Jennifer Kutz, had some interesting things to report about 2017.

2016 may have seemed like a nightmare, given the natural disasters, political drama, and violence, but 2017 seems to have given it a run for its money. According to Tenor's GIF analysis, Kutz says, in 2017, people in general were 31 percent more negative and 18 percent less positive than the year before. Additionally, users were apparently trying to drown their sorrows, too, because they used 39 percent more references to drinking.

Coming in the rankings for the year's most popular memes were Cash Me Outside, Salt Bae, Think About It, and Trump Draws.

What's interesting, though, is that laughter-related memes and GIFs actually went up this year by almost double.

Kutz cautions that, with something abstract like laughter, people could be referencing the emotion in both positive and negative ways. Some users were likely making laughter references in a sad, jaded or ironic sense — basically the laughing-crying emoji. In some cases, like when a situation is particularly stressful or upsetting, people may have the impulse to laugh rather than express another emotion like fear or anger (think nervous laughter). Kutz thinks, based on the data over the last year, that we're becoming less shocked to the intense, day-in-day-out news cycle.

"People are becoming more inert to negative news, to drama, and I would feel pretty confident saying we’re just laughing about all this," Kutz says. "We’re taking it in stride."

On the same note, objectively funny, lighthearted, and goofy memes also might've gotten a boost from the overwhelmingly negative current events that dominated the year. "I think this onslaught of negativity does make our appetite for something lighthearted and funny [increase]," Kutz says. "It’s refreshing and we rush to embrace it and feel better." (Who hasn't watched fifteen minutes' worth of funny animal videos to get through a tough day?)

Are the memes and GIFs we use really important, though? It turns out, they are. Kutz stresses that the moving images, in a digital-first landscape, serve as a tool to convey our emotions. (It's like the body language of virtual communication.) She says, "we are really using GIFs and memes as devices to augment our communication and add tone and context," which, if you’re not sitting in front of someone, are hard to convey. "GIFs are specifically used to emote for us in a digital way. ... 90 percent [of users] are using these GIFs to help them convey their specific mood or personality."

So, at least as far as our digital sharing is concerned, whether people are time and time again choosing a crying meme over a dancing meme may be a big hint at our nation's collective emotions. And 2017, by the looks of it, was a pretty depressing one.