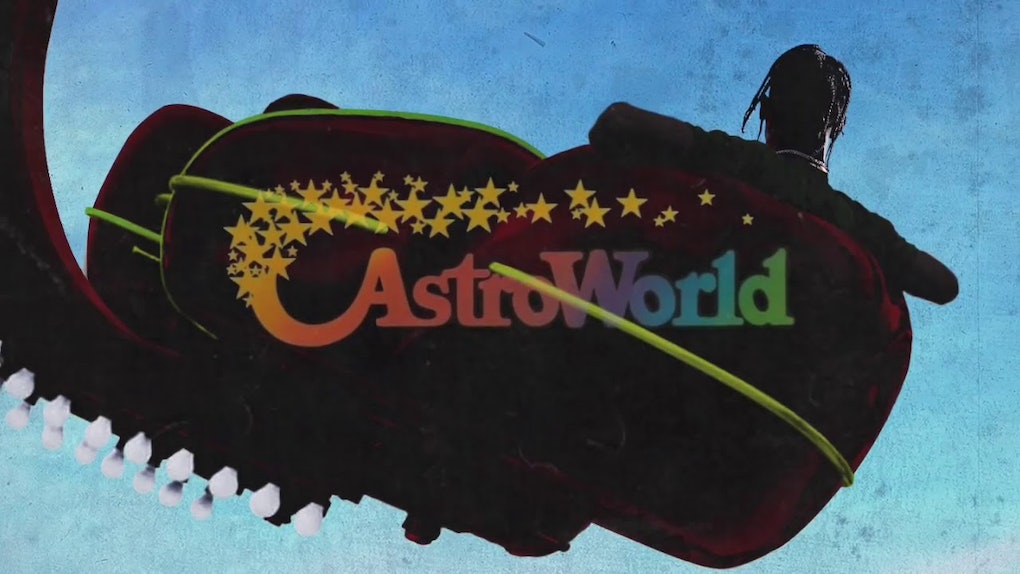 Who else is obsessed with Astroworld? Admit it, the album title and overall aesthetic is basically a dream come true, especially for my fellow stargazing community. In fact, I'm going to show you how the meaning of Travis Scott's Astroworld is totally rooted in astrology. It's honestly a cosmic masterpiece, if you ask me. I'll be honest with you, I'm a big fan of his art, and you want to know something else? I know for a fact I'm not the only one who had "Antidote" on repeat three years ago, don't deny it.

Fun fact, when I first listened to the album, I couldn't help but think of Scott's GQ interview with Kylie Jenner, when she asked him what her zodiac sign was. I really liked the fact that he paid attention to her star sign, and actually knew it by heart. Although, maybe I'm giving him too much credit here, considering he didn't know how many tattoos she had, let alone the names of her seven dogs. Call me petty, but I would have a mini meltdown if my boyfriend, aka baby daddy, didn't have the tattoos on my body memorized, not to mention the names of my adorable pups. Then again, that's just me.

In the meantime, let's take a closer look at the "Butterfly Effect" singer's natal chart, and how these astrological influences likely play a role in his music.

According to Astrotheme, Travis Scott was born with his sun in sensual Taurus. His moon, Mercury, and Venus are in fiery Aries, and his Mars is in dreamy Pisces. For starters, Venus rules Taurus, and his Venus is in Aries, so Travis is actually more Aries than Taurus, by a long shot. That's not all, Aries is ruled by hot-headed Mars, and his Mars is in Pisces, so his chart is a cosmic combination of fiery (Aries) passion and elusive (Pisces) dreams. Make sense?

Have you seen this video? Believe it or not, this is a perfect example of Travis Scott's Mars in Pisces energy. In astrology, Mars is the planet of action, sex, and red-hot passion, while Pisces is the sign of illusion and subconscious dreams. This water sign is an ocean of emotions, and with Mars here, all of those emotions combust into a fiery plethora of psychedelic feels. Oh, and in case you didn't already know, this entire track is about his lady love. In fact, have a look at some of his lyrics below:

She caught the waves just thumbin' through my braids / Heatin' up, baby, I'm just heatin' up / Need ya love, not a need it is a must / Feelin' stuck, you know how to keep me up / Icy love, icy like a hockey puck

If you look closely at the video, you'll notice how it all looks like a strange daydream. Everything from the neon butterflies, to the hazy drive through the hidden hills, is a perfect example of his Pisces influence. In astrology, Pisces is ruled by Neptune, the planet of fantasy; in mythology, Neptune is the god of the ocean, which makes sense considering Pisces is represented by the two fish in the zodiac wheel.

Put it this way: Have you ever felt seasick? Well, this is sort of what Neptune feels like, and interestingly enough, Scott seems somewhat disoriented and under the influence in this video. Again, major Pisces vibes. Plus, Mars is sex, right? Well, this is exactly how he expressed his desires for Kylie: waves and all.

"STOP TRYING TO BE GOD"

In his latest visual "STOP TRYING TO BE GOD," Travis is seen surrounded by both fire (Aries) and water. (Pisces) At one point, the 26-year-old rapper is seen riding a monster with two horns through fiery flames. Now, I don't know about you, but that "monster" looks like a massive ram, which can be interpreted as a symbol of Aries. However, some say he's making a biblical reference to the beast, in the Book of Revelation. I'll let you be the judge of that.

Now, toward the end of the video, Kylie Jenner makes a gorgeous cameo, where she's seen holding onto Travis, covered in glitter and shimmering gold. Again, to each his own, but this is a perfect visual of Kylie's zodiac sign Leo. In astrology, Leo is ruled by the sun, and those born under this sign, are blessed with an eternal glow of sunshine.

Kudos, Travis. I really like what you did there.

Something else that caught my attention is Aug. 3, the day Travis dropped Astroworld. On this day, the sun was in majestic Leo, and the moon was in Aries, which also happens to be Travis' moon sign. Coincidence? I think not. Aries and Leo are sister fire signs, which is another reason why he's so mesmerized by Leo babe Kylie Jenner. So, why Leo season? Why on an Aries moon?

Well, my guess is, he checked in with the Kardashian-Jenner family astrologer and set the date. Now, what do you get when you drop an album on an Aries moon during Leo season? A fire album.

From the bottom of my heart, thank you.

More like this
The 'Ginny & Georgia' Character You Are, Based On Your Zodiac Sign
By Chelsea Jackson
Lizzo's Birth Chart Explains Her Confidence & Why She's Made For The Spotlight
By Chelsea Jackson
The May 2021 New Moon Will Be The Worst For These Zodiac Signs
By Roya Backlund
Stay up to date