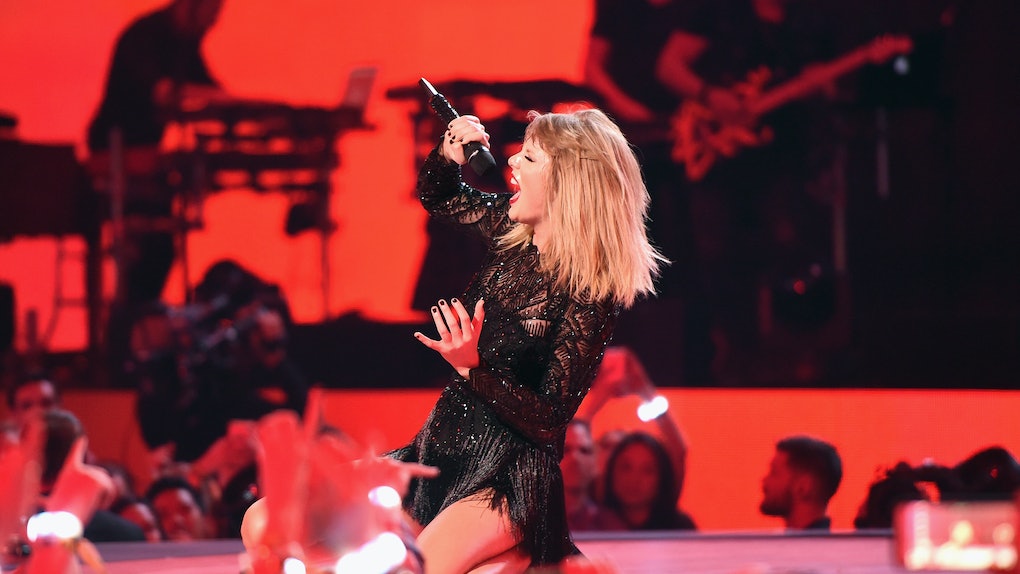 The Meaning Of Taylor Swift's "So It Goes..." Is A Lot To Handle

Reputation is here, and it's so much more than we ever expected. I mean, I knew we were in for a doozy of an album release, but this is so much more. "So It Goes..." is one song that has been gaining a lot of attention. While it has Swift's signature sound, it also has the classic "surprisingly deep meaning" that Swift has come to master. SHE'S JUST SO DEEP. But the meaning of "So It Goes..." is a lot to handle because it's also really sexual.

The first thing fans noticed about this track title is that it shares the addition of an ellipsis like "...Ready For It." Lots of fans have been wondering what the meaning of the ellipsis on Taylor Swift's Reputation track list means, as track 1 and Track 7 are the only two songs with the mysterious three dots. One pretty rock solid theory is that the ellipsis surrounding "...Ready For It?" and "So It Goes..." means Reputation is split into two parts. Those first seven songs, according to fan theories, are all about her reputation and how it's been formed by the media instead of herself, and the remaining eight songs are about her actual life. I swear, Swifties can be so wise sometimes... SOMETIMES, GUYS.

Those ellipsis are definitely intentional, and the song titles for the first half of the album have a vastly different tone from the second half. This isn't to say fans were expecting Reputation to come out in two discs or anything like that. No, fans are simply saying it's split into two narratives. The first "half" of the album features the first two singles Swift released, "Look What You Made Me Do" and "...Ready For It?" The second half includes "Gorgeous" and "Call It What You Want," which Swift also dropped before the entire album. Can I just say, the second half does seem a little more related to Swift's personal life.

In Taylor Swift's world, there are no accidents. I'm sure the ellipsis in the titles of "So It Goes..." and "...Ready For It" are there for a special reason. Once Swift starts doing more press about the album, I think everything will start coming into the light. Reputation is so, so amazing, and I'm glad Swift is receiving all the praise and success she deserves. LOVE YOU, TAY.

As for the meaning of the song, it definitely seems to be about a flame. I'm betting that it's about her current boyfriend, Joe Alwyn. The lyrics read,

See you in the dark

All eyes on you, my magician

You make everyone disappear and

Cut me into pieces

Gold cage hostage to my feelings

Back against the wall

Trippin’ when you're gone

When you get me on, it’s so simple

We could feel it

and I’m yours to lose

The song seems to tell the story of Swift falling in love with someone, possibly Alwyn. "All the pieces fall right into place" and she's "not a bad girl" but will "do bad things with you"? Yeah, that's definitely the honeymoon phase of dating right there!

Met you in a bar

All eyes on me, your illusionist

I make all your grey days clear and

I’m so chill but you make me jealous

But I got your heart

When I get you alone it’s so simple

We can feel it

There are a lot of words relating to magic here. Maybe it's to show that their relationship really is like magic?

Whatever the true meaning of the song if, it's definitely a jam. Reputation is now available for purchase everywhere. You can purchase "So It Goes..." here.