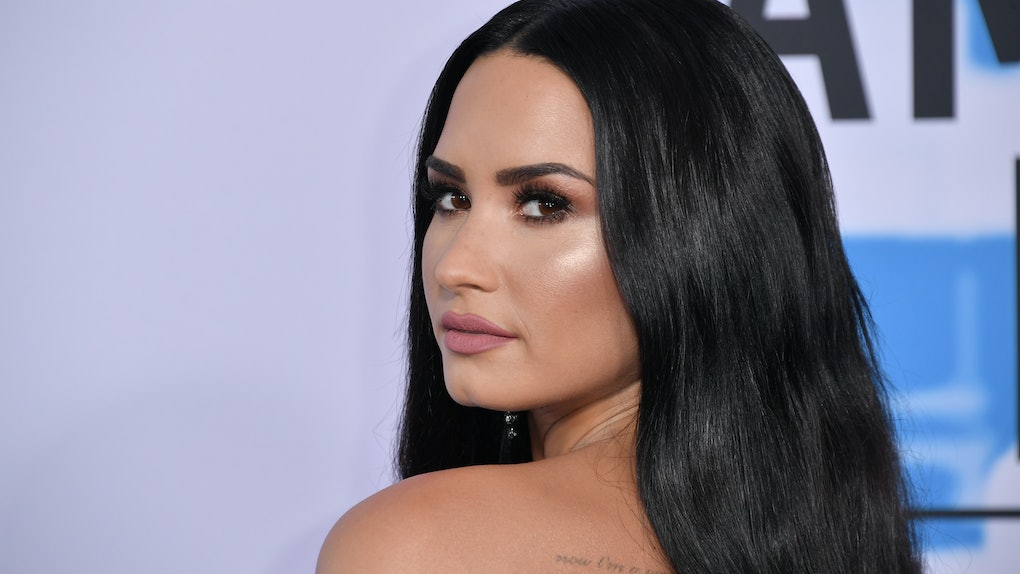 For fans of the talented singer, Lovato notably turned heads when, on Nov. 22, she took to Twitter and posted a photo of herself in a wedding dress, having fans freak the eff out, while also talking about how incredible she looked in the white gown and veil (seriously, a damn vision). Fans almost immediately caught on, theorizing that the snapshot was a teaser for the video "Tell Me You Love Me", because the lyrics are clearly about romance, love, and maybe (definitely) some heartbreak.

Here are a few lines that will make you go, "same," if you've ever loved anyone:

Oh no, here we go again

Fighting over what I said

Bad at love, no, I'm not good at this

But I can't say I’m innocent

Not hardly, but I'm sorry

And then the chorus:

I need someone on days like this, I do

Oh, can you hear my heart say

No, you ain't nobody 'til you got somebody

You ain't nobody 'til you got somebody

So, yeah, you can see why some people were quick to put two and two together:

She then posted a picture of a "save the date" on Instagram, featuring her name alongside her presumable fiancé, Jesse, confirming that yes, this is a teaser for the "Tell Me You Love Me" video:

So, we have a bride and a wedding date, which sounds pretty optimistic. But the song itself seems... well, kind of sad.

So, when she took to Instagram and posted two additional teasers, just a day before we were all able to watch the video in full, we finally got to see that the happy bride might have just been complete smoke and mirrors, looking back on a time when she was happy and in love, though now she's alone.

The first shows photo slides of Demi in her wedding gown, shifting to photos of her in a blush dress, then finally, in black:

Then another, with ominous church bells ringing in the background, and a lonely Demi dressed yet again in black, followed by what seems like a vision of a distant memory of her wedding day:

And now that the video is here, a lot of people are trying to decode what it truly means.

The video shows Demi and her fiancé, Jesse, clearly in love but fighting constantly over seemingly anything and everything. Still, they continue through with the wedding, only for Jesse to leave a stunned Demi at the altar. Damn.

So, sure, the video shows a woman who was in love but is now just a shadow of the person she once was after her heart was broken when a man left her at the altar, but many think there's more to it than just that, especially because of how similar the story seems to Lovato's own relationship with her ex-boyfriend of six years, Wilmer Valderrama.

She explained the meaning of the song to her fans at a New York City album launch, and fans were convinced that it definitely alluded to Valderrama:

The first time I heard it, it really stuck with me because at the time I was going through a breakup. ... It's about the vulnerability of coming out of a very serious relationship and having a tough time with it. ... It also at the same time calls out a big misconception with the line, 'You ain't nobody 'til you got somebody,' which again comes from that vulnerability with mixed emotions.

And Lovato has been very forthcoming about her history with Valderrama, going on to reveal that she was unsure about her choice to break up with him in her documentary Simply Complicated:

Do we know for sure that "Tell Me You Love Me" is loosely based off of Lovato's personal struggle with love, and perhaps the issues she faced in her own relationship? While we don't know the definite answer to that, we're pretty positive that this song — and the video — are beyond beautiful.

More like this
Are Demi Lovato & Noah Cyrus Dating? They're Reportedly "Hanging Out"
By Joyann Jeffrey
Rosé From BLACKPINK's "Gone" Music Video Is The Ultimate Sad-Girl Aesthetic
By Abby Monteil
Demi Lovato's Quote About Falling In Love With Herself Is So Inspirational
By Candice Jalili
Stay up to date