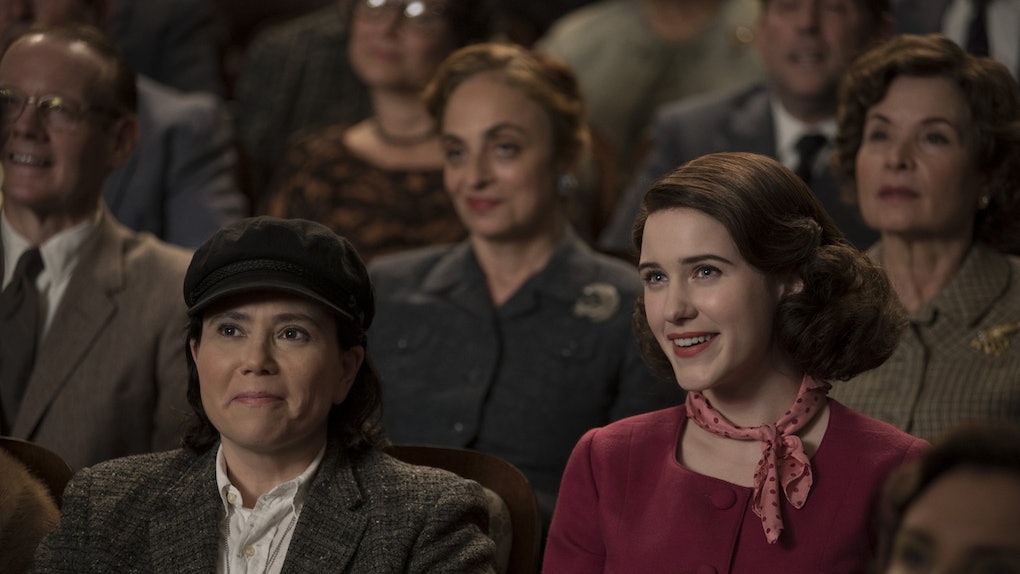 'The Marvelous Mrs. Maisel' Season 3 Premiere Date Has Been Announced, So Get Ready

After past stints in Paris and the Catskills, Season 3 of The Marvelous Mrs. Maisel is bound for more travel as Midge hits the road with her comedy act. Following a long wait, fans can finally pencil in the exact dates of this expansive tour, and luckily, this flight is taking off in the not-so-distant future. The Marvelous Mrs. Maisel Season 3 premiere date has been announced, so start preparing your Sabbath dinners and opening acts now.

Amazon Studios announced on Aug. 19 that its Emmy-winning comedy will return for Season 3 on Friday, Dec. 6. The streaming service also released the season's first teaser, setting up the circumstances of Midge's (Rachel Brosnahan) six-month tour with singer Shy Baldwin (Leroy McClain). After Midge turned to ex-husband Joel (Michael Zegen) for comfort rather than current beau Benjamin (Zachary Levi) in the Season 2 finale, Midge appears in the trailer in court with Joel, perhaps to finally begin those divorce proceedings. There, Joel gives her touring plans a stamp of approval, sending Midge off onto a glamorous-looking — yet frenetic — trip across the United States with manager Susie (Alex Borstein).

Offering glimpses of Midge's comedic ally Lenny Bruce (Luke Kirby) and her family's Miami vacation, the teaser also reveals the first official look at Sterling K. Brown's unknown character. The This Is Us star appears on Midge and Susie's flight to a new tour location, so it seems he may work with Shy Baldwin's team. He also appears to be a seasoned pro at flying, as he is smooth and confident in response to Susie downing a drink before takeoff. Randall Pearson can't be anxious all the time, right?

The teaser also alludes to Midge meeting huge success while on the road. She performs at packed venues, arrives to hordes of fans, and even finds time to squeeze in an exercise class with New York pal Imogene (Bailey De Young). Meanwhile, Susie kicks off her partnership with new client Sophie Lennon (Jane Lynch), and Abe (Tony Shalhoub) and Rose (Marin Hinkle) appear to clash over Midge's raunchy comedic style yet again. And yes, the 1950s fashion looks totally on point.

The eight-episode Season 3 arrives several months after The Marvelous Mrs. Maisel celebrated a total of 20 Emmy nominations for Season 2. Having won eight Emmy Awards for its first season, the show is now in contention for categories such as Outstanding Comedy Series and Outstanding Directing. The 2018 acting victors, Brosnahan and Borstein, have reprised their slots in the Leading and Supporting Actress in a Comedy categories, while co-stars Shalhoub, Hinkle, Kirby, and Rufus Sewell are also nominated for their performances. By the time Season 3 hits screens, the outcome of Sept. 22's 2019 Emmys will be old news, but based on the Marvelous Mrs. Maisel teaser, viewers will be too invested in this new story to notice.

How this tour affects Midge's career in the long run is still unclear, but creator Amy Sherman-Palladino vaguely hinted about what else Season 3 will bring. "Things move and change," she told GoldDerby. "The beginning of the ‘60s was still a little bit like the ‘50s. It sort of gained momentum as you got deeper into the ‘60s."