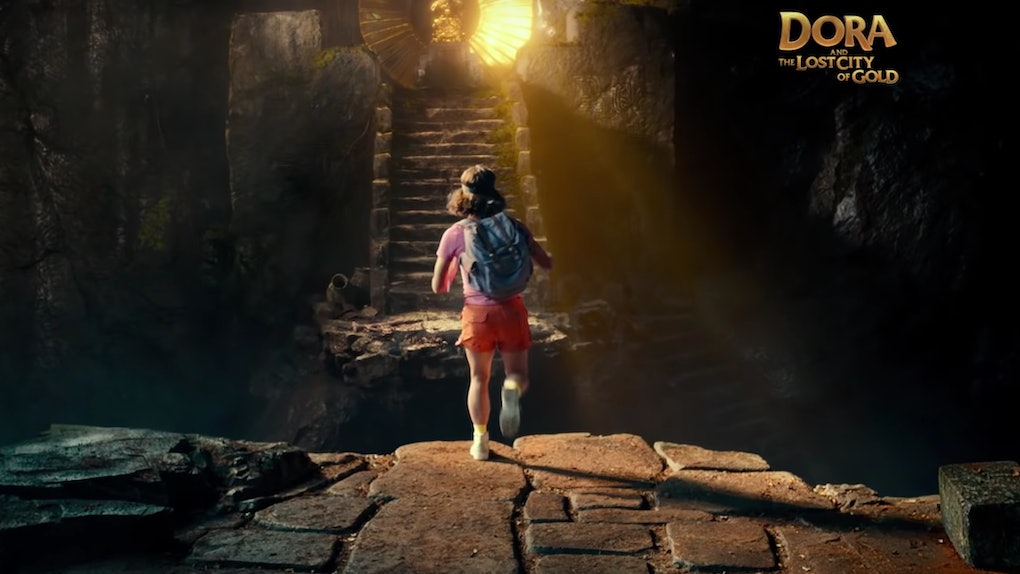 Paramount Pictures is giving viewers their first sneak peek at a teenage Dora the Explorer. On Saturday, March 23, the studio released the live-action Dora The Explorer trailer for the upcoming reboot during Nickelodeon's Kids' Choice Awards. The film reimagining of the cartoon "Dora the Explorer" series is expected to swing into theaters on Aug. 2, and judging from the trailer, Dora is learning to navigate the waters of young adulthood while searching for hidden treasure.

During the 2019 Kids' Choice Awards Saturday Night, the network decided to give viewers a dose of nostalgia by airing the first trailer for the live-action film, Dora and the Lost City of Gold. In the preview, fans can see Dora (played by Isabela Moner) take on her "most dangerous adventure ever": High school.

According to People, which previously shared a run-down of the film's plot, Dora is getting a grown up makeover in the 2019 live-action film:

The adaptation will take the beloved adventurer through the rough-and-tumbles of adolescent crushes and familial relationships — all while solving the mystery of a lost Inca civilization.

Judging from the preview, it looks like that's what we'll be getting. In the opening scenes, a teenage Dora gets told by her parents (played by Eva Longoria and Michael Peña) that they're hot on the trail to find the Lost City of Gold. In the meantime, she has to go to school in the city and "be around kids her own age."

Considering that Dora grew up in the jungle, hilarious hijinks ensue as she struggles to figure out how to not get stuck in school buses and decides to bring flares to school. However, with the help of her cousin Diego and a CGI version of Boots (who is voiced by Danny Trejo and doesn't wear red boots in the live-action film, FYI), she slowly starts to acclimate — until she, Diego, and a few of her high school classmates are kidnapped by henchman trying to find Dora's parents and the Lost City of Gold.

This is definitely not the Dora you remember from the TV series — for starters, the teen explorer unsheathes a knife when she realizes that they've been captured — and things definitely take an Indiana Jones-esque turn towards the latter half of the trailer.

Shortly after the sneak peek aired, fans took to Twitter to reflect on the fact that the film's heroine looks and acts very different than the pint-sized explorer who we know and love from the original series, which aired from 2000 to 2014.

Instead, viewers are comparing the film to more action-forward movies like the Indiana Jones series and Lara Croft Tomb Raider. It's definitely a big departure from the cartoon show targeted at kids, but some people are definitely digging it.

Dora And The Lost City Of Gold doesn't come out until Aug. 2, according to the trailer, so I'd keep an eye out for many more sneak previews featuring a grown-up Dora as we get closer to summer.