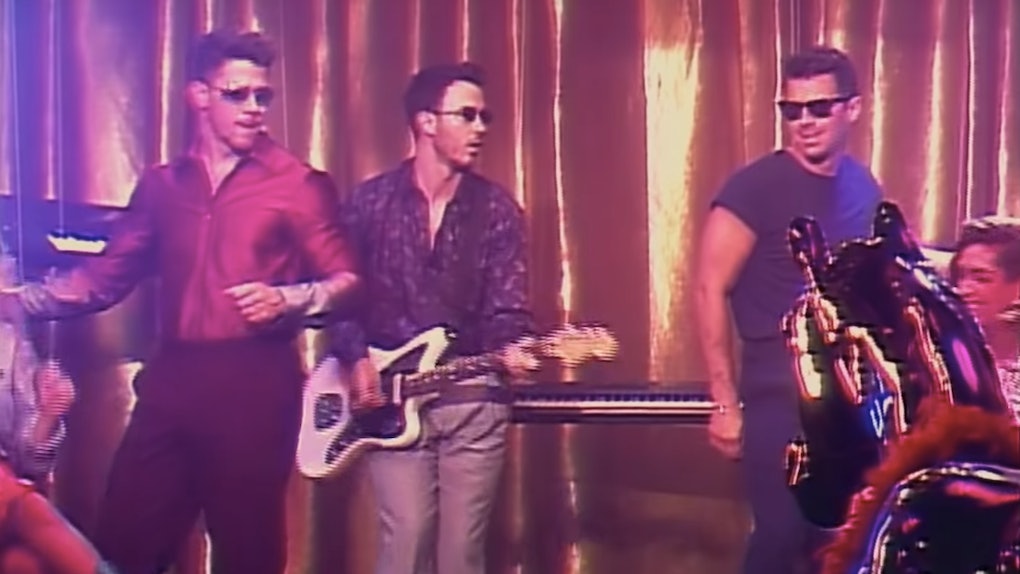 The music video was filmed in New York City, not long after Joe Jonas and Sophie Turner's dog, Waldo, tragically died after being hit by a car. Turner and Chopra did visit the set while the guys were filming, according to Billboard, but they didn't jump into any scenes like I telepathically begged them to. Rude.

The promotional lead-up to this video was actually pretty amazing. The promo photos on the Jonas Brothers Instagram grid and story showed Joe, Nick, and Kevin on posters like ones of our favorite heartthrobs us millennials would cut out of J-14 magazine. That's all kinds of amazing, considering the Jonas Brothers were featured all over teen magazines when they first got famous. I vividly remember reading articles in teen magazines about Nick Jonas and Miley Cyrus' romance and swooning over them, so the guys are giving their fans one hell of a throwback with these photos. The video takes those photos and cranks them up to 3,000 with an amazingly '80s vibe.

Behold, the "Only Human" music video.

It's ~only human~ their fans are freaking out about this video. I mean, y'all watched it, right?

The song was one of the bops from the Happiness Begins albums, and was released as the album's third official single. In the video, Kevin, Nick, and Joe show off their comedy chops by performing like an '80s rock band. These three are at their best when they're allowed to be funny, so I love to see them fully leaning in to that in this video.

It's hard to tell what decade they were going for at first with this (it could believably be the '80s or '90s), but the song's lyrics say "drunk to an '80s groove," so I've decided it's definitely the '80s. The video is set up as if the guys are performing live on a music TV show, complete with Joe taking song requests that are coming in via a bunch of corded telephones.

The fashion, the dancing, and the set all have an amazingly '80s music video vibe, then the brothers and the rest of the cast eventually venture outside where an old Taxi cab is parked. They swarm the cab with a dance number, then the cab driver — hilariously flummoxed — gets out of his cab at the end and yells at Nick. It's wonderful.

If The Jonas Brothers continue this now three-video streak of hilarious music videos, we're in for a wild era of Jonas Brothers Happiness Begins content.

More like this
Is Saweetie's "See Saw" About Quavo? The Lyrics Are Brutal
By Corinne Sullivan
Rosé From BLACKPINK's "Gone" Music Video Is The Ultimate Sad-Girl Aesthetic
By Abby Monteil
These Tweets About BTS' 'Bang Bang Con 2021' Sum Up The Epic Performance
By Cianna Garrison
Stay up to date