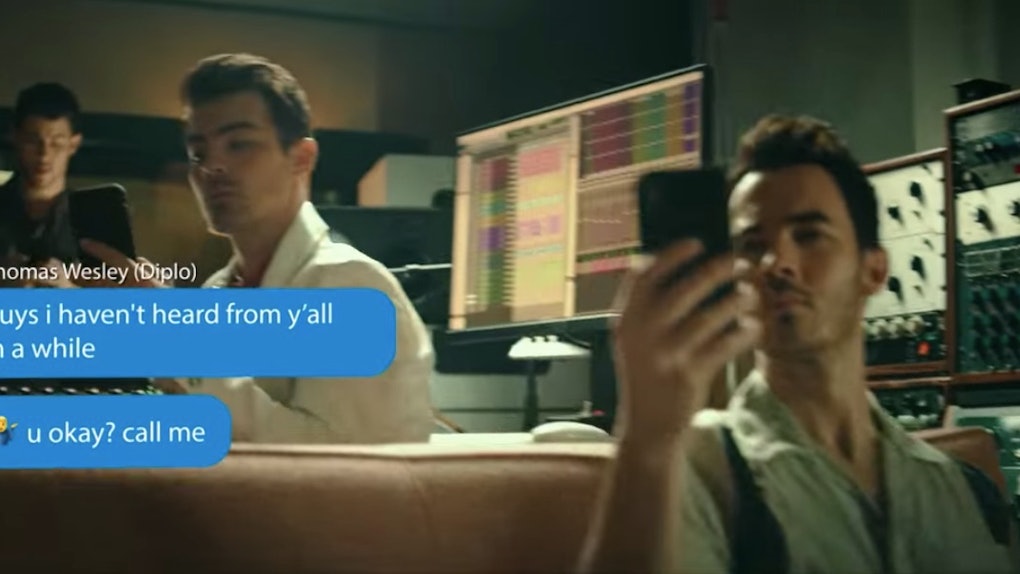 Well, we may not be getting Kanye West's Jesus Is King on Sept. 27 as originally promised, but we got something even more epic, fam. You know, IMHO. Diplo and the Jonas Brothers just dropped a new song called "Lonely" at midnight, along with a music video on YouTube. The track is set to appear on Diplo’s forthcoming country album, and so as you can imagine, the boys are all decked out in lots of awesome western garb in the vid. There's also a bunch of sad faces and emotional staring-at-iPhone moments goin' on in the Jonas Brothers and Diplo's "Lonely" music video, so make of that what you will.

We knew something was about to go down with the quartet when Diplo fake-hacked the Jonas Brothers Instagram account on Spet. 26 — he posted a pic of himself in his Calvin Klein briefs and nothing else, y'all! He also unfollowed everyone but himself because of course he did, then wrote "The @jonasbrothers are dorks and I hacked their Instagram #dorkusbrothers" on his own IG page.

The JoBros then got all pretend-mad, naturally. But we now know the whole thing was either A) just a big PR stunt to hype "Lonely," or B) a means to connect for an epic collab track — which, it turns out — is a pop-y, twangy trip down a long, dusty country road. One that apparently has great cell service. Can someone find out who their carrier is? K thx bye.

Anyhoo, check out the video below:

The video is basically one big joke about Joe Jonas' short-lived feud with Diplo following him streaming Joe's surprise wedding to Sophie Turner live when he was invited after the Billboard Music Awards back in May. Jonas joked that Diplo had ruined the secret wedding by streaming it, but clearly he wasn't that mad about it if he hopped in the studio with him shortly after his social media faux pas.

The video takes advantage of their funny feud, starting with a shot of Diplo looking at a tabloid headline about ruining the Jophie wedding in disappointment. Throughout the video, we see Diplo trying desperately to get in contact with Joe to try and smooth things over. He texts Joe constantly.

"Hey Joe... Sorry for live streaming the most important day of your life that u intended to keep private. Hope we can move past this," he wrote in a text that goes ignored by Joe. He then tries reaching out to his brothers Nick and Kevin to try and reach Joe, but they ignore him, too. But in the end, after much effort on Diplo's part, that brothers finally decide it's time to forgive and give Diplo a call on FaceTime. Sadly, right as Diplo is swiping right to pick up the call, his phone dies. BLARG. But at least we know the pals have forgiven Diplo in spirit!

I'm really digging Diplo's star-spangled suit with fireworks on the shoulders and big white stars on the lapels. Anyone know where I can get me one of those babies?

More like this
Rosé From BLACKPINK's "Gone" Music Video Is The Ultimate Sad-Girl Aesthetic
By Abby Monteil
What Does Taylor Swift's Vault Door Video Mean? Fans Are Decoding It
By Cianna Garrison
Taylor Swift's 'Fearless (Taylor's Version)' Lyric Changes Are Small, But Meaningful
By Michele Mendez
Stay up to date