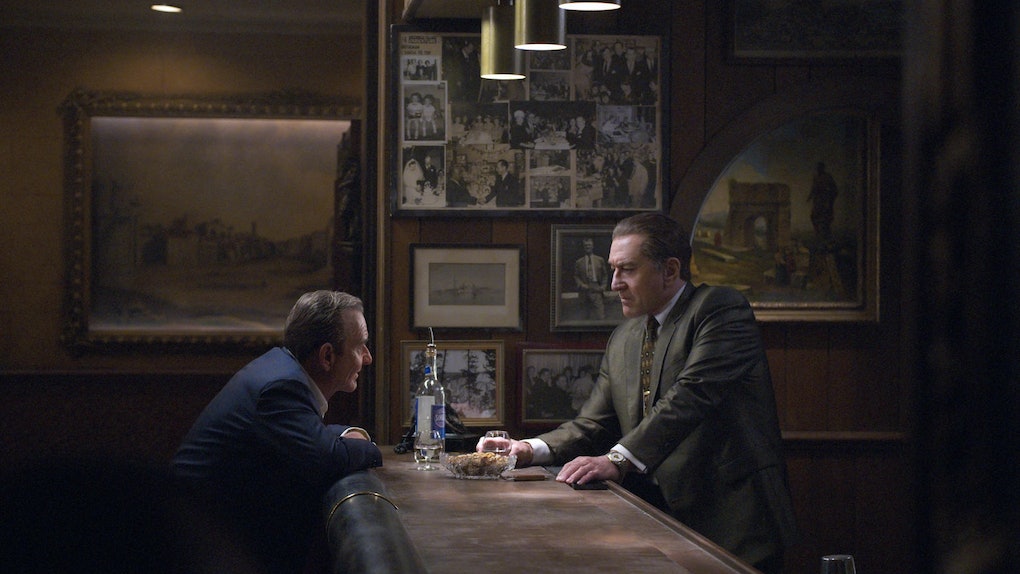 'The Irishman' Trailer Will Transport You Back In Time

If it's the beginning of Oscar season, then it's time for Netflix to start rolling out its best shots. The streaming service was an immediate player in the prestige TV game since its first original series, House of Cards, premiered back in 2013. But when it comes to the movie business, that's been a tougher nut to crack. The film industry, especially the higher-end award circuits, have resisted Netflix. But the streamer keeps coming, and 2019's The Irishman trailer suggests at least one of its offering may force the industry to take them seriously.

Part of the reason that Netflix has had such trouble gaining acceptance is that the movie industry wants people to see films in the theaters. Netflix subscribers are paying to be able to watch things at home or on the go. This makes for an inherent conflict. Netflix has done well with films like Roma, but it's been despite the industry, not because of it.

Cannes, for instance, made rules that a film had to play in a theater for a certain amount of time before being available via streaming to be eligible for the Palme d'Or. In response, Netflix refuses to show any films there. It's not the only one either. In July of 2019, the Directors Guild of America (DGA) changed its rules so a film must debut in theaters before it streams in order to be considered.

But Netflix will win this fight. After all, is the DGA going to insist the great Martin Scorsese is not eligible for an award when his movie comes packed with a cast that includes Robert De Niro, Al Pacino, and Joe Pesci?

Everything about this film screams awards bait, and not just because it got Pesci to come out of retirement. It's precisely the sort of mobster film Scorsese made his bones doing. It's a period piece spanning from World War II to the 1980s. The film is based on a book, the 2004 memoir I Heard You Paint Houses by Charles Brandt.

Brandt's story focuses on his experience working for the infamous crime boss Jimmy Hoffa (Pacino). It's told through the lens of Frank "The Irishman" Sheeran (De Niro), the alleged hitman for the Bufalino crime family. (Pesci plays his boss. Russell Bufalino.) Sheeran is believed to be the one who killed Hoffa.

Moreover, the trailer suggests that Scorsese's upcoming film may be the turning point in the CGI practice known as "de-aging." So far, this technology has mostly turned up in movies like Captain Marvel, Avengers: Endgame, and IT Chapter Two. In short, blockbuster popcorn fare, the type of film the Oscars historically treat as beneath them.

But The Irishman uses the technique liberally throughout the film. Pacino, who is 79, is taken back to half his age. De Niro and Pesci, both 76, are shown in their 30s and 40s.

The good news is The Irishman will come to theaters, and it will do so before it debuts on Netflix, making it eligible for all awards next January. The movie opens in limited release on Nov. 1 and will land on Netflix on Nov. 27, 2019.

More like this
Is Netflix Making A 'To All The Boys' Spinoff Series About Kitty? Here's The Tea
By Rachel Varina
'He's All That': Premiere Date, Cast, Trailer, Filming News, & More
By Dylan Kickham
'The Witcher' Season 2: Release Date, Cast, Trailer, & More Info
By Ani Bundel
Stay up to date