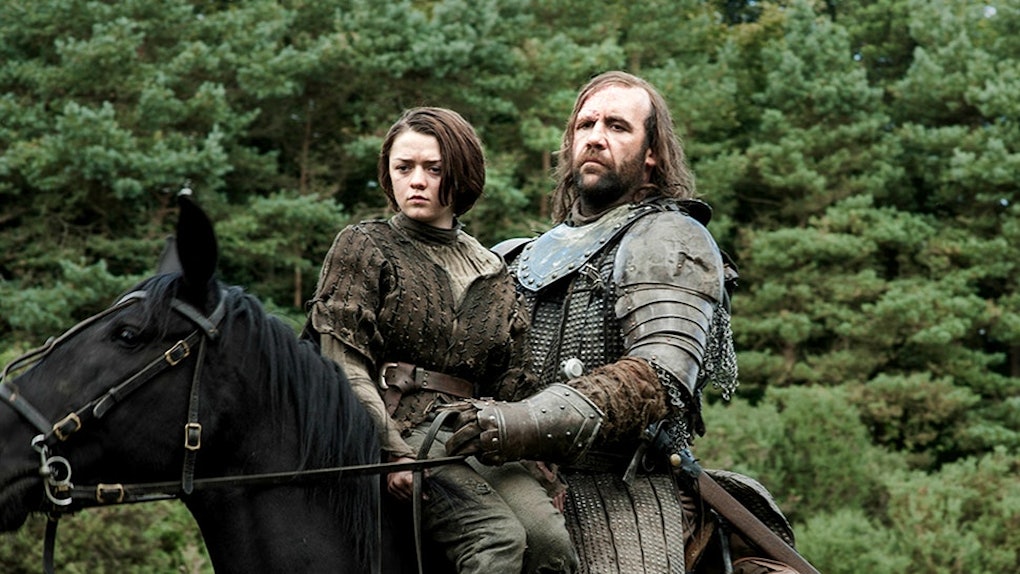 On the Sunday, May 12 episode of Game of Thrones, Arya Stark and Sandor Clegane, better known as the Hound, headed to King's Landing alone to kill Cersei and Gregor "The Mountain" Clegane ahead of Daenerys' army. However, once they got to the Red Keep, the Hound urged Arya to head back and let him go on alone to fight his older brother to prevent Cersei from escaping. The Hound saved Arya for the last time on Game Of Thrones before attempting to kill the Mountain, and the emotional scene will give you all the feelings.

While the pair slid their way into King's Landing with the intention of killing the Mountain and Cersei, the Hound appeared to have a change of heart after he saw the Red Keep going up in flames. Much of the past few seasons have seen the Hound's path to redemption through his surprising friendship with Arya, and it seemed like it had come full circle after he saved her from Wights and Night Walkers during Episode 4.

Before the Hound met his death at the hands of the Mountain, he told Arya to save herself rather than try to kill Cersei.

"Go home girl," he told her before heading off to face off against his brother. "You’ll be dead too if you don’t get out of here.

When she appeared to resist (after all, Cersei was on Arya's kill list), he said, "Doesn't matter, she's dead. Look at me! You want to be like me?"

Referencing his own obsession with revenge and killing his brother, which he previously alluded to during the finale of Season 7, he continued, "You come with me, you die here."

During what was the arguably the most heart-melting moment of the episode, Arya then appeared to change her mind and course of action. As she left, she told her unlikely friend, "Sandor, Thank you."

Moments later, the Hound faced off in a particularly gruesome fight with his older brother, and the highly-anticipated Clegane Bowl was just as heart-wrenching as fans expected. After getting his eyes poked out Oberyn Martell-style, the Hound rallied for one last stand and took his brother out along with him by falling into the flames below the castle. Considering that the preceding scene was the last time that Arya and the Hound ever saw each other — and that their goodbye was the Hound basically telling her to save herself — Throners have serious ~feelings~ about the moment.

While fans will miss the loss of these unlikely #friendshipgoals, the Hound saving Arya with his advice sets the stage for her to potentially try to kill Daenerys in the upcoming episodes. Considering that Melissandre told Arya that the Lord of the Light would bring her back so she could kill someone with blue eyes (the Night King), brown eyes (Walder), and green eyes (in this case, possibly the Mother of Dragons) and a white horse mysteriously appeared to her at the end of Episode 5, it looks like Arya is a serious contender to stop the Mad Queen from bringing havoc to Winterfell.

More like this
This 2021 'Game Of Thrones' Season 8 Trailer Is So Confusing... & So Good
By Ani Bundel
How Many Episodes Will 'This Is Us' Season 5 Have? Only A Few Are Left
By Ani Bundel
Shonda Rhimes' Quote About Regé-Jean Page Leaving 'Bridgerton' Is SO Shonda
By Rachel Varina
Stay up to date